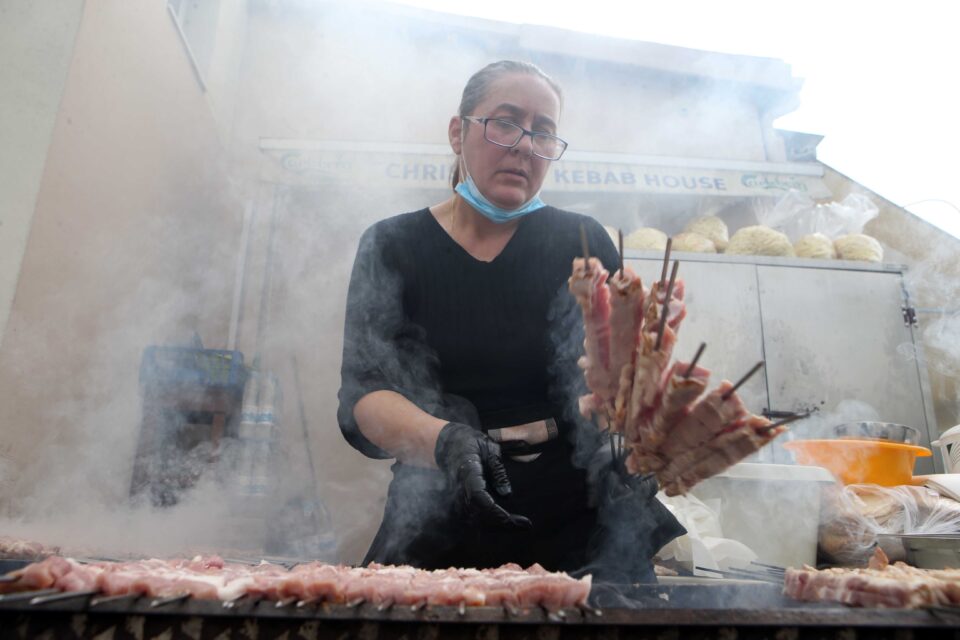 As additional relaxations of the coronavirus measures came into force, locals across the island were barbecuing to celebrate Stinky Thursday, which marks the first day of carnival celebrations.

Demand for meat saw an increase from Wednesday, with people preparing to barbecue at houses and outside workplaces to honour the tradition of the day said to ‘stink the air’ with the smoke of charcoaled meat.

“We don’t have time to take a breath,” the head of the butchers’ association Costas Livadiotis told Alpha News on Thursday. He said he opened at 7am and will continue to operate until 9pm.

“We might cut 1,000 kilos of souvlaki today,” he added, explaining that is the most preferred meat for the day, among pancetta, bacon, ribs, liver and steak.

Few are those who chose to cook souvla, the butcher said.

Meanwhile, Thursday the first day of celebrations for the carnival which was due to begin with the official presentation of this year’s queen Vera Efthimiou Parlalidou at 6pm at Pattihio theatre, Limassol was postponed due to the situation in Ukraine, the municipality said later in the day.

Carnival vents are scheduled for the next 11 days, most of which will be held in Limassol, where the annual parade is traditionally held. It is not known yet whether more will be postponed.

Due to the limited number of people allowed indoors, the public was asked to pre book their free tickets, available online at www.tickethour.com.cy. All events for this year’s carnival are posted on the municipality’s website at https://www.limassolmunicipal.com.cy/el/program-limassol-carnival.

In light of the celebrations, a special protocol for nightclubs comes into effect as of 10am on Thursday. Checks in those establishments will intensify to ensure people abide by the new measures.

Under the protocols, night venues will be able to host a maximum of 500 people, if there is 1.5 square metres per person.

The rules are in force for four different types of areas, according to their space and whether there are areas for dancing.

The first and second is for venues with or without a designated dancing space respectively, that are over 225 square metres of serviceable space (kitchens, toilets and storage units are excluded) and can serve over 150 people.

Testing is required regardless of vaccination or recovery status.

The third is for areas where, regardless of its capacity, there is no designated dancing area and dancing is only allowed at or around the tables.

The final list is for areas where under 150 people are being served, where entry is allowed to the unvaccinated with a negative 24-hour test and those over 12 who have recovered or fully vaccinated against the virus. For children 6-11, entry is permitted with a vaccination or recovery certificate or a seven-day negative rapid test.

People will also be required to present proof of ID during checks.

Russia does not seek to occupy Ukrainian territory, ambassador to Cyprus says