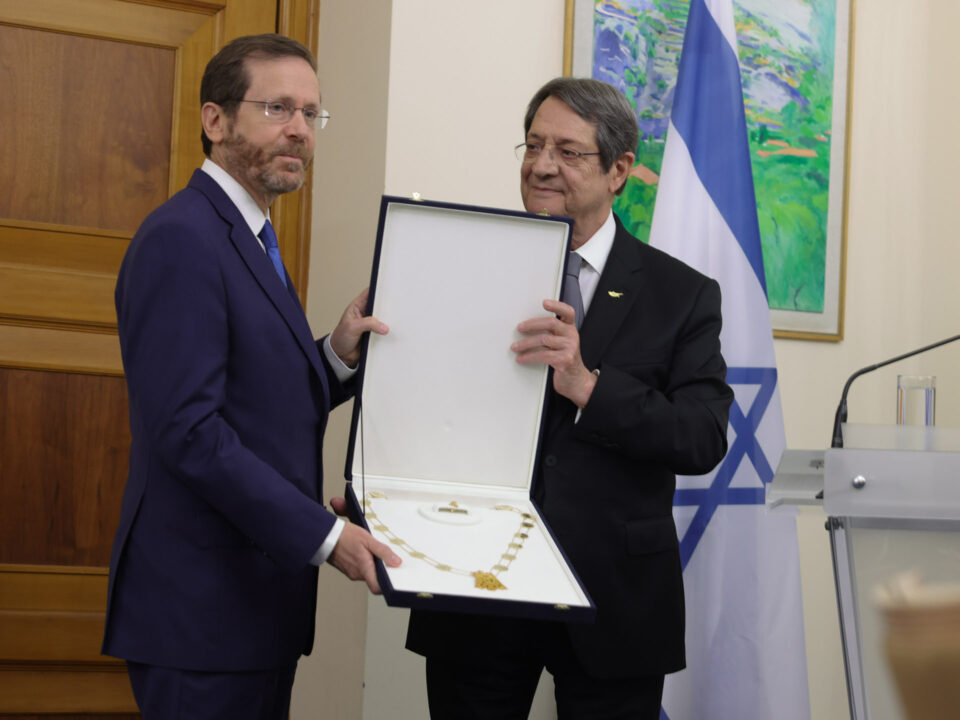 Anastasiades underlined the excellent relations between the two countries, as well as his personal bond with Herzog during his speech.

The Israeli president was also awarded with the Grand Collar of the Order of Makarios the Third during the ceremony, “for the contribution and future efforts in promoting universal values and enhancing the ties between the two nations”.

The ongoing conflict with Ukraine was a main topic during the meeting, with Anastasiades calling for an end to the violence through diplomacy.

Herzog’s first stop was the presidential palace in Nicosia where he received an official welcome from President Nicos Anastasiades.

“We both agree dear president that the current crisis will have grave repercussions globally, as we both agree that it can only be resolved through dialogue and diplomatic means,” he said.

“I must say that, as Cypriots, we relate very closely to the plight of the Ukrainian people. We ourselves have been victims and are still suffering from the tragic consequences of the 1974 Turkish invasion.”

Herzog and Anastasiades also discussed the trilateral relationship with Greece and the ongoing developments as regards the energy cooperation between countries following the war.

“The fact that the war in Ukraine greatly impacts the energy supply and its prices, reinforces even more the argument and the belief that the EU needs diversified and stable energy supplies to guarantee its energy security,” Anastasiades said.

The Eastern Mediterranean, he added, could prove highly beneficial to the EU’s energy security.

“Cyprus and Israel participate in projects that fit very well into this discourse. The East Med pipeline, if proven technically and financially viable, can provide gas and hydrogen, thus diversifying European supply routes and adapting to various needs of the market,” Anastasiades said.

The president also briefed Herzog about the latest developments on the Cyprus problem, thanking him for his stance against Turkey and for Israel’s commitment to reunify the island.

“It is an honour to have a true friend of Cyprus at the highest office of our strategic partner. This proves the historic links between our peoples and countries and at the same time cements the steady evolution of our future relationship.”

Speaking before Herzog’s arrival, Israeli ambassador to Cyprus, Oran Anoli, said the visit is proof of the excellent relations between the two countries.

“We are friends, we are partners, we cooperate on various issues and sectors and together we promote common interests for the benefit of both peoples,” he said, adding that Cyprus and Israel were linked by strong ties from even before the establishment of the two states.

The ambassador also mentioned that Herzog’s grandfather had made an investment in Cyprus in the 1930s in Fassouri. This is an example of how Cypriots and Israelis have deep, almost historical roots that continue to bear fruit, he said.

Meanwhile, increased security measures will be in place during the visit. Police have issued notification to the public that there will be intermittent road closures in Larnaca district until 4 pm on the Larnaca – Nicosia highway; and in Nicosia district.

Russian rouble slips past 100 vs dollar, banks hunt for FX