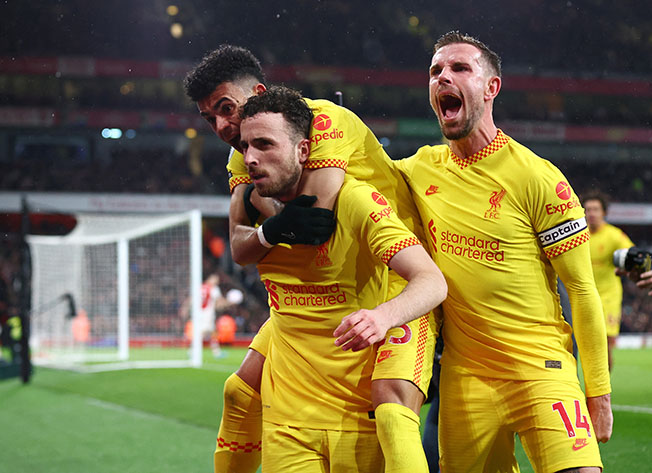 Manchester City beat Southampton 4-1 in the FA Cup on Sunday to secure their spot in the semi-finals but though the result may have looked comfortable, Pep Guardiola’s side had to dig deep to win.

City looked vulnerable from the start and, despite scoring first, entered the break level, after conceding a goal right before halftime.

The tie remained very much in the balance until the 75th minute, when Phil Foden’s spectacular strike took the wind out of Southampton’s sails.

“We didn’t play at our best but after the second goal we did much better,” City midfielder Kevin de Bruyne told the BBC. “The third and fourth goals were beautiful goals and we saw then how good we can play.”

Arsenal have improved markedly just at the right time, with their 1-0 Premier League win at Aston Villa putting them four points clear of Manchester United in sixth and three ahead of fifth-placed Tottenham Hotspur in pursuit of the final Champions League qualification spot.

One of the main reasons for their recent revival has been the long-awaited return to full fitness of Thomas Partey, who controlled proceedings in the Midlands from central midfield, giving Arsenal a calming influence they have been missing.

“We have been working hard to find consistency at this club for some years,” manager Mikel Arteta said after Saturday’s victory.

“While talking about consistency, having Thomas play three games in six days is something he has not been able to do since he got here.

“To have him playing three games in six days, at his top level, makes a huge difference for us.”

JOTA CONTINUES TO BE UNSUNG HERO

Liverpool are not short of attacking talent but one player who often goes unheralded, in comparison to other bigger names in the ranks, is Diogo Jota.

While Mohamed Salah’s incredible feats rightly garner much acclaim, Jota’s impressive goal return does not always get the praise it deserves.

Without the Portuguese’s clinical finish in Liverpool’s fortunate 1-0 win at Nottingham Forest on Sunday, Juergen Klopp’s side would not still be in the hunt for four trophies this season.

The winner at the City Ground made it 19 goals this term for Jota, and two in his last two games, having undergone a mini barren run. Just the right time for the Liverpool forward to rediscover his goalscoring touch.

Arrest after man reports he was mugged