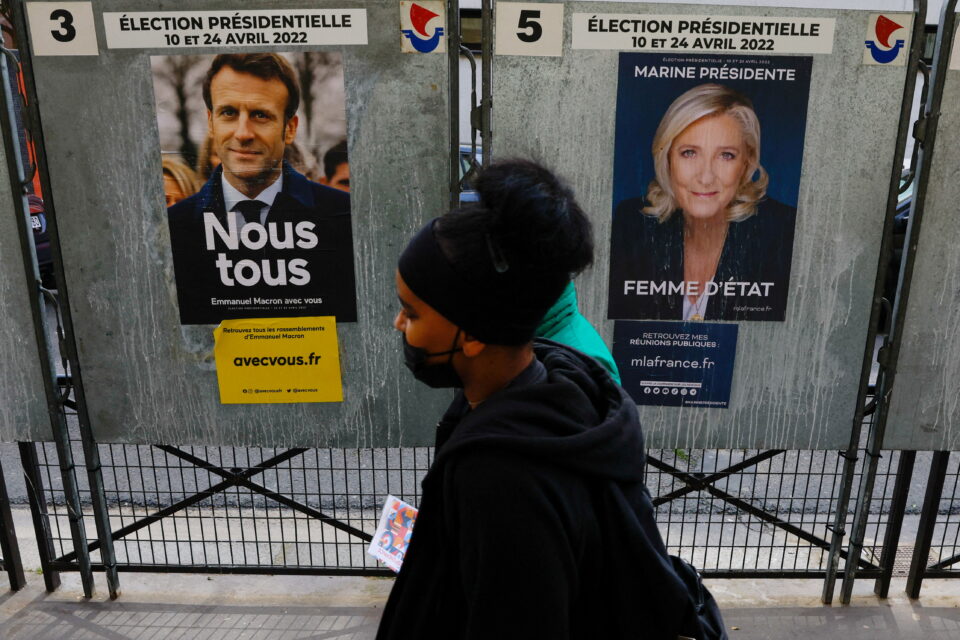 The two likely candidates to be present in the second round ballots, Marine le Pen and President Emmanuel Macron

French President Emmanuel Macron voiced regret on Friday for starting campaigning late as opinion polls showed him holding a slender lead over the far-right candidate Marine Le Pen, who he warned would scare investors away from France.

Le Pen has surged in the polls in recent weeks and is expected to face off in the second round against Macron, whose re-election was thought to be a foregone conclusion even a few weeks ago.

Macron is still ahead in the polls for the second-round match-up, but his lead is within the margin of error.

“Who could have understood six weeks ago that all of sudden I would start political rallies, that I would focus on domestic issues when the war started in Ukraine,” Macron told RTL radio.

“So it is a fact that I entered (the campaign) even later than I wished,” Macron said, adding that he retained a “spirit of conquest rather than of defeat.”

If Le Pen is elected this month, her social programme will drive away international investors, Macron said in an interview with daily Le Parisien.

“Her program will create massive unemployment because it will drive international investors away and it will not hold up budget-wise,” he said.

“Her fundamentals have not changed: it is a racist program that aims to divide society and is very brutal.”

Le Pen told France Info radio on Friday: “Emmanuel Macron does not know my program… he must think it is that of (far-left contender) Jean-Luc Melenchon.”

French President Emmanuel Macron is the favourite to win re-election in a two-round ballot on April 10 and 24.

Here’s a look at the leading scenarios for the decisive second round of the election:

Le Pen is the most likely candidate to face Macron in a second-round runoff. She has surged in polls as she rows back on her more pugnacious rhetoric and delivers voters a simple message: I’ll put money back in your pockets.

Le Pen’s ratings suggest she has been successful in de-demonising the image of her far-right party, without actually changing its core, anti-immigration platform.

Surveys show her winning up to 23% of first-round voting intentions.

In a runoff against Macron, polls project she could secure as much as 47%-48.5%, putting victory within the statistical margin of error. Abstentions and undecided voters could spring a surprise.

The hard-left’s Jean-Luc Melenchon is polling third and edging higher. His supporters are hoping for an upset.

With the traditional centre-left Socialist Party verging on irrelevance and the Greens struggling to galvanise a wide support base, Melenchon has appealed to left-wing voters to rally behind him.

He is now polling at 14%-17% in voter support surveys compared with 9%-10% in January for the first round. Polls see Macron easily beating him if he makes it to the second round.

The rise last year of Eric Zemmour, a talkshow star who channels ex-U.S. President Donald Trump’s anti-establishment style as he paints himself as the would-be saviour of a nation under a perceived threat from Islam, upended the early campaign race.

Last year, some surveys showed Zemmour reaching the second round, but his support has fallen back as he struggles to formulate ideas beyond immigration and security and has been hurt by his comments on Russia.

But opinion polls now show him winning 9%-11% of votes in the first round, far behind Le Pen and Melenchon.

Macron would comfortably defeat Zemmour in a second round, polls have shown.

The head of the greater Paris region, Valerie Pecresse, who describes herself as part Margaret Thatcher, part Angela Merkel, won the conservative Les Republicains’ ticket in December, which gave her a boost in opinion polls.

However, she has seen her campaign falter as she struggles to set herself apart from Macron while countering the nationalist programmes offered by her far-right rivals.

Recent opinion polls show her winning only 8%-10% of votes in the first round.

HIGHLY UNLIKELY: MACRON OUT OF THE RACE

No opinion poll sees Macron failing to qualify for the April 24 runoff.