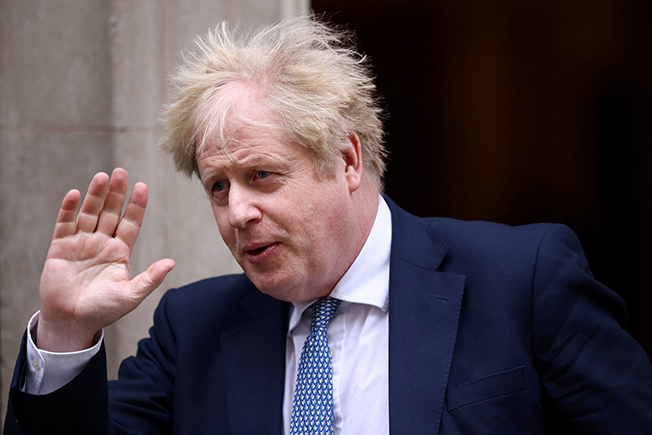 After months of dodging the issue, it appears that British Prime Minister Boris Johnson did in fact break his own emergency laws during COVID restrictions.

The police have fined Johnson, his wife Carrie and – in a new twist to the story – Chancellor Rishi Sunak in relation to the partygate affair, which saw staff socialising in government buildings while the rest of the country was living under severe restrictions on their movements.

In a video statement issued shortly after the announcement from the police, Johnson revealed that he has already paid the fine, which relates to a gathering on his birthday on June 19 2020 in the Cabinet Room of 10 Downing Street. He said he did not think, at the time, that it broke the rules.

A few weeks ago, when the police first announced it was investigating partygate, it really did look like Johnson’s future was hanging in the balance. Since then a number of events, not least Russia’s invasion of Ukraine, have shifted the political spotlight away from the prime minister’s predilection for partying.

This fresh scandal is undoubtedly bad news that the prime minister could have done without. It is unprecedented to have the holders of the top two great offices of state – prime minister and chancellor – subject to police-mandated penalties.

It’s not so much the fines that matter in this case, but the principles that have been broken to make the police fines necessary. This story of birthday cakes and Christmas quizzes has become a constitutional matter.

Ever since news first broke of government staff partying during the darkest moments of the pandemic, Johnson has consistently refused to admit that the law was broken. In recent weeks, he has been able to refer to an ongoing police investigation as cover for failing to engage with questions on the matter. He couldn’t possibly comment, he insisted, before the official inquiries reach their conclusion.

The announcement that the prime minister is among dozens of people being fined removes that defensive shield, however. It now seems almost impossible for Johnson to claim that no criminality was committed. He may well be a politician with remarkable skills but surely it’s beyond even his wily ways to somehow convince the public that a police fine is anything other than a very firm signal of criminal guilt.

It is at this point that the conventions written into the Ministerial Code come into play. This document sets out various expectations about the conduct of government ministers when in office, including – crucially in this case – the expectation that any minister who knowingly misleads parliament will be expected to resign.

Multiple government ministers have fallen foul of this rule over the years but it is yet to take down a prime minister.

Attention during the next hours and days is likely to turn almost exclusively to this point. The key question is whether on all of those occasions when the prime minister has previously denied that any rules were broken he was knowingly misleading parliament.

The prime minister has never spoken in parliament about the June 19 event specifically but has told MPs on several occasions that no rules were broken at other key moments – and often in terms that implied no rules were ever broken.

He has, for example, insisted to parliament that he believed one of the most controversial Downing Street gatherings to be a “work event” – suggesting that if rules were broken, he was an unwitting participant in the breach. Asked about a Christmas party in December 2020, he said “all guidance was followed completely in No. 10”.

Both leave the prime minister on difficult ground. Nor has the Metropolitan Police ruled out issuing further fines in relation to events on dates other than June 19.

It is, in practice, highly unlikely that Johnson will admit to having lied. Saying sorry has never been his style, and an admission of treating parliament with such contempt is almost unthinkable.

Denial and detachment are by far the most likely responses.

Denial will come in the form of promoting a sense of confusion around whether the fines relate to rules, laws or regulations. Expect bluff and bluster until the wind has blown out of the issue – and perhaps another surprise trip to Ukraine.

Detachment will mean trying to shift the blame onto someone else. Johnson will continue to claim that he did not knowingly mislead the House and was simply following the essence of the advice that he himself received from officials and advisers. If he isn’t willing to accept blame, there remain plenty of other staff among those being fined who can carry the can.

Is partygate going to be the issue that brings Johnson down? At the end of the day, ousting the prime minister would require a large number of Tory backbenchers to rebel and support a vote of no confidence in him. While there is embarrassment and frustration within his party, there does not appear to be an appetite for total capitulation. Not yet.

Bar all the noise and shouting, the partygate moment has probably passed.

Matthew Flinders, Founding Director of the Sir Bernard Crick Centre for the Public Understanding of Politics, University of Sheffield