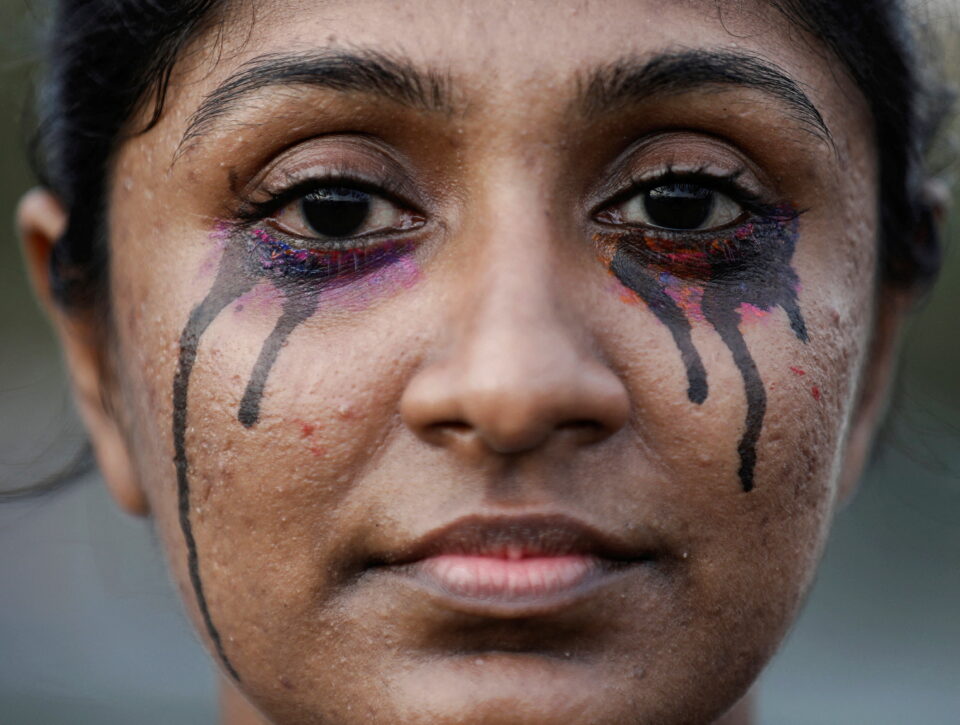 A demonstrator is seen during a protest against Sri Lanka President Gotabaya Rajapaksa. Photo by Reuters

Demonstrations have raged across the South Asian island country of 22 million people for weeks, voicing anger against the government’s mishandling of the economy that has led to shortages of essentials and prolonged power cuts.

Mihiri Priyangani, director of the Kegalle Teaching Hospital, said at least one protester was killed and 12 injured were hospitalised, including two in critical condition, after clashes broke out between demonstrators and police in the central town of Rambukkana.

The deceased person – the first fatality since the largely peaceful protests began last month – had likely been shot, Priyangani told Reuters. “We are suspecting gunshot injuries but need a post-mortem to confirm the exact cause of death.”

Disturbances erupted after police asked protesters to move away from a key railway line which they had blocked for hours, police spokesman Nalin Thalduwa said.

“To control the situation, police fired at the protesters,” Thalduwa told Reuters.

“Several injured policemen have also been hospitalised,” he said, adding live ammunition and tear gas had been used to repel a crowd pelting stones and other objects. “Police are still in the area and attempting to restore calm.”

Some rights groups and foreign diplomats called for restraint and condemned the violence in Rambukkana, where police imposed a curfew late on Tuesday.

“A full, transparent investigation is essential & the people’s right to peaceful protest must be upheld,” the U.S. Ambassador to Sri Lanka, Julie Chung, said in a tweet.

Analysts have flagged political instability as a serious risk as Sri Lanka looks to negotiate a loan programme from the IMF, with a delegation headed by Finance Minister Ali Sabry kicking off formal talks in Washington on Monday.

The government is looking for assistance to help top up its reserves and attract bridge financing to pay for essential imports of fuel, food and medicines.

Shamir Zavahir, an aide to Sabry, said on Twitter that Colombo had asked for an IMF loan under the rapid financial instrument (RFI) window, meant for countries needing urgent balance-of-payment support. But the global lender was initially not inclined to grant the request, he said.

“The IMF has subsequently informed Minister Sabry that India had also made representations on behalf of Sri Lanka for an RFI,” Sri Lanka’s finance ministry said in a statement.

“It has been communicated that IMF will consider the special request made despite it being outside of the standard circumstances for the issuance of an RFI.”

The financial crisis arose from the effects of government financial mismanagement, exacerbated by the coronavirus pandemic, and as rising prices of fuel sapped foreign reserves. Fuel, power, food and medicines have been running low for weeks.

Sri Lanka is seeking $3 billion in the coming months from multiple sources including the IMF, the World Bank and India to stave off the crisis, Sabry told Reuters earlier this month.

Both India and China have already extended billions of dollars in financial support to Sri Lanka. Sabry met Indian counterpart Nirmala Sitharaman on the sidelines of the IMF deliberations, and both sides said they agreed to deepen their cooperation.

“India will fully support the deliberations of Sri Lanka with the IMF, especially on the special request made for expediting an extended fund facility,” Sabry’s office said, citing his meeting with Sitharaman.

Last week, Sri Lanka’s central bank said it was suspending repayment on some of its foreign debt pending a restructure.

In the commercial capital Colombo, protests demanding the ouster of President Gotabaya Rajapaksa have dragged on for more than a week.

In parliament on Tuesday, Prime Minister Mahinda Rajapaksa – the president’s elder brother – reiterated a call for a unity government that the opposition has rejected.

In a move to defuse the protests and demands for their resignation, the Rajapaksa brothers have also offered to reduce the executive powers of the president by amending the constitution.

“Together with the support of the president, we will move towards broad constitutional reforms,” said Mahinda Rajapaksa, a former president himself. “We request support from the public, the opposition and all other stakeholders.“