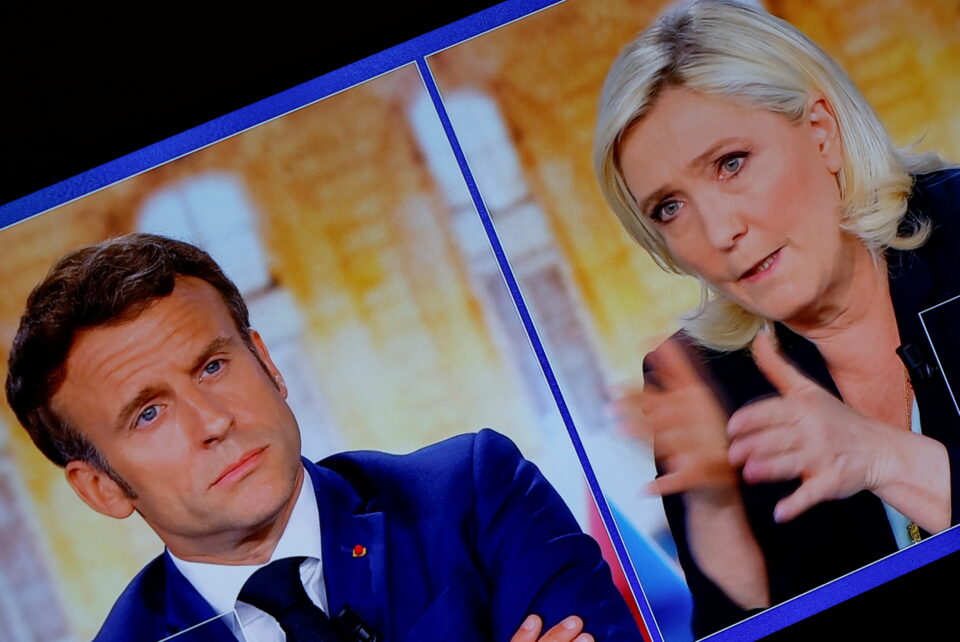 French President Emmanuel Macron and his far-right challenger Marine Le Pen locked horns in front of a live television audience on Wednesday for their only debate ahead of Sunday’s presidential election.

Televised debates have long featured in French elections and have yielded exchanges, one-liners and put-downs remembered by the public for years. Le Pen’s poor showing in a 2017 TV debate with Macron was seen as a factor in her poll defeat back then.

Here are some of the main takeaways from their encounter, which is scheduled to go on for two and a half hours.

This was a predictably tense and tetchy affair right from the start. Le Pen launched into a speech even before the introductory theme music had come to an end, forcing the moderator to ask her to begin again – which she did, brushing the incident off with a laugh and launching into a direct attack on Macron’s record on the economy.

The light-touch moderation meant there were plenty of interruptions, vexed expressions, impatient body language and appeals of: “Can I finish my sentence?”

While local media reports that Macron was keen not to be seen as condescending, he did describe Le Pen’s arguments as “incoherent.” At one point he could not help suggesting that Le Pen was confused about the financial impact of her own spending plans. She interjected crossly: “Don’t try and give me a lesson on my own programme!”

It was billed as the biggest concern for the French, but the discussion on purchasing power boiled down to two things: Macron’s cap on energy prices as inflation rises versus Le Pen wanting to scrap VAT tax on a 100 common consumer goods.

It set the tone for much of the rest of the evening’s debate on economic issues as Macron dissected each of her economic proposals to show the difficulties Le Pen would have in implementing and financing her manifesto. “Your measures are inefficient and unfair,” he said.

Easily one of the most heated exchanges took place over the Ukraine war and specifically Le Pen’s links to Russia. She immediately started her response on Ukraine by expressing her “absolute solidarity” with the Ukrainians, a sign she wanted to sweep aside her past ties with Russian President Vladimir Putin.

Le Pen was also conciliatory with Macron on the subject, hailing his efforts to support Ukraine and stop an escalation.

But Macron went for the jugular: Referring to her party’s decision to take out a loan with a Russian bank, he told her “you depend on Mr. Putin.” Le Pen countered by saying she had not been able to get a loan in France and insisted that the transaction in no way compromised her independence. “I am a completely free, independent woman.”

The widely divergent stances of the two on the European Union quickly became a stark fault-line during the debate, to which Macron in particular kept on referring. His strongest line took aim at Le Pen’s assertion that she wanted France to keep its place within the EU while reforming the bloc. “It is a project which dares not speak its name – and that is to leave Europe,” he said. Denying that, Le Pen made a direct appeal to French pride over its food and agriculture heritage: She said current EU rules forced lower quality imports onto French plates and needless cruelty in the long-distance transport of livestock for slaughter from other states.

A strong defender of the Paris accord on climate change, Macron has nonetheless disappointed many French ecologists with the green credentials of his government and his decision to double-down on nuclear power as a way to cut carbon emissions. Yet he did not hesitate to label Le Pen a “climate sceptic” over her plans notably to get rid of France’s sizeable park of wind turbines generating renewable energy.

Le Pen came back with a line that may register with voters on the left which Macron has sought to reach this week with new promises of more action on the environment. “I’m not climate sceptic,” she said. “But you’re a climate hypocrite.”

As the two tired and turned to security they calmly outlined their ideas with Macron even offering a lighter note on the tonality of the evening. “We’re a lot more disciplined than five years ago,” he said. “We’re older,” she responded.

But the pleasantries stopped there as the two sparred over the hijab. Le Pen wants to eventually ban the veil in public spaces if she were elected and said that most young women who wear it are forced to do so.

Macron accused her of linking too easily the hijab to “Islamism.” He added “with me, there won’t be a ban on the hijab, the kippa or any religious symbols in public. In the suburbs, you’re going to create a civil war, I’m saying this in all sincerity.”

IT services market to grow despite effects of Ukraine conflict