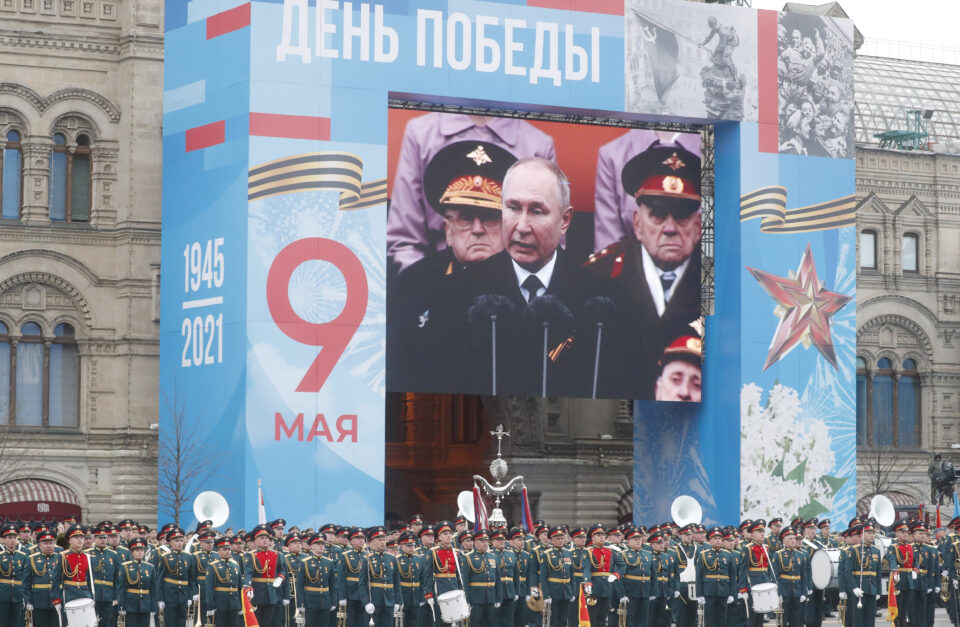 Russian President Vladimir Putin will send a chilling ‘doomsday’ warning to the west when he leads his country’s May 9 ‘Victory Day’ parades brandishing Russia’s vast firepower while its forces fight on in Ukraine.

The celebrations, which mark the 77th anniversary of the Soviet Union’s victory over Nazi Germany, could be used to try and reignite the country’s stuttering invasion.

The parade will see Putin speak on Red Square before a mass of troops, tanks, rockets and missiles.

The flying command centre is built as a secret mobile base for Russia’s leaders during the event of nuclear war and its presence is thought to be a pointed reminder to western onlookers.

The 69-year-old Kremlin leader has repeatedly likened the war in Ukraine to the challenge the Soviet Union faced when Adolf Hitler’s Nazis invaded in 1941.

“The attempt to appease the aggressor on the eve of the Great Patriotic War turned out to be a mistake that cost our people dearly,” Putin said on Feb. 24 when he announced what he called a special military operation in Ukraine.

“We will not make such a mistake a second time, we have no right.”

Putin casts the war in Ukraine as a battle to protect Russian speakers there from persecution by Nazis and to guard against what he terms the U.S. threat to Russia posed by NATO enlargement. Ukraine and the West dismiss the fascism claim as nonsense and say Putin is waging an unprovoked war of aggression.

The Soviet Union lost 27 million people in World War Two, more than any other country, and Putin has railed in recent years at what Moscow sees as attempts in the West to revise the history of the war to belittle the Soviet victory.

Beside the 1812 defeat of French Emperor Napoleon Bonaparte, the defeat of Nazi Germany is the Russians’ most revered military triumph, though both catastrophic invasions from the west left Russia deeply sensitive about its borders.

There have also been reports that Putin will use the day to call for all-out war against Ukraine, mobilising Russian society.

Up until this point it has been referred to as the “special operation” in Ukraine, and the Russian media were even banned from using the word ‘war’ at one point.

However, there are reports that, under pressure from hardliners within the Kremlin and military, Putin will go further with the war effort.

Despite efforts during the parade to cast it as a day of victory, Moscow’s ongoing struggling invasion of Ukraine will cast a long shadow over proceedings.

Tens of thousands have died since Russia invaded on February 24, with the Kremlin’s troops suffering the heaviest losses.

Nearly ten million people have been displaced and fled to neighbouring countries and across Europe as fears of a wider confrontation between Russia and the west have been raised.

Despite the 11,000 troops marching across the Red Square with 131 pieces of military hardware, Russia’s invasion of Ukraine has exposed gaping weaknesses in its armed forces.

This is despite efforts in the last few decades to modernise and improve the Russian armed forces.

Instead of achieving the lightning victory it hoped for, the Kremlin finds itself in a protracted conflict that has already seen it stage on major retreat and regrouping.

On top of that, the Russian economy has been hit by sanctions that left the country’s central bank scrambling to ease the impact of.