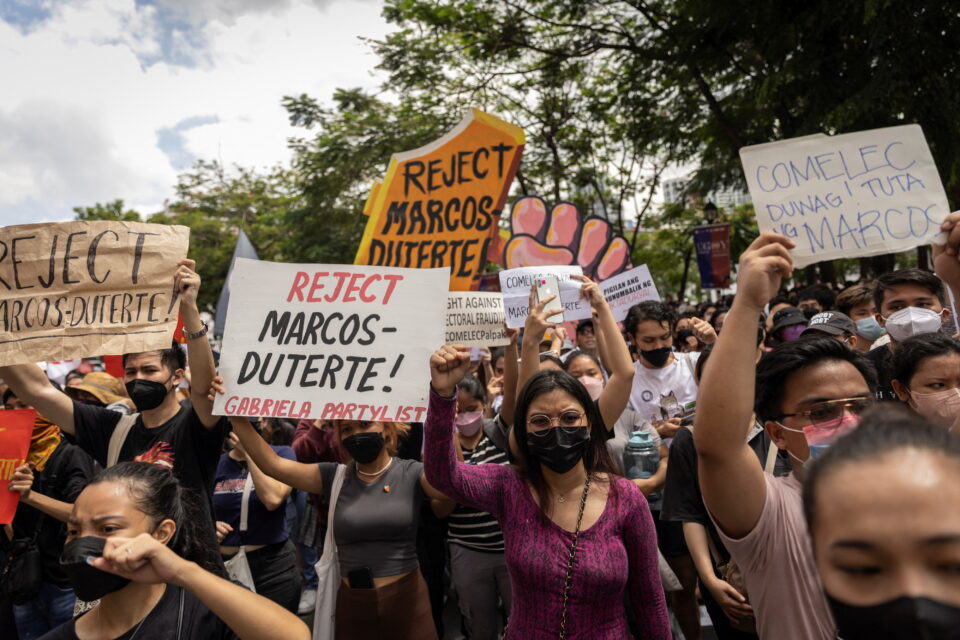 Students and activists gather outside the Commission on Elections to protest its unofficial tally of the national elections, showing presidential candidate Ferdinand "Bongbong" Marcos Jr. on course to win the presidency, in Manila, Philippines, May 10, 2022.REUTERS/Eloisa Lopez

The Philippines woke to a new but familiar political landscape on Tuesday, after an election triumph by Ferdinand Marcos Jr. paved the way for a once-unimaginable return to the country’s highest office for its most notorious political dynasty.

Marcos, better known as “Bongbong”, trounced bitter rival Leni Robredo to become the first candidate in recent history to win an outright majority in a Philippines presidential election, marking a stunning comeback by the son and namesake of an ousted dictator that has been decades in the making.

Marcos fled into exile in Hawaii with his family during a 1986 “people power” uprising that ended his father’s autocratic 20-year rule, and has served in congress and the senate since his return to the Philippines in 1991.

Marcos’s runaway victory in Monday’s election now looks certain with about98% of the eligible ballots counted in an unofficial tally showing he has nearly 31 million votes, double that of Robredo.

An official result is expected around the end of the month.

“There are thousands of you out there, volunteers, parallel groups, political leaders that have cast their lot with us because of our belief in our message of unity,” Marcos said in a statement streamed on Facebook, while standing beside the Philippine flag.

Though Marcos, 64, campaigned on a platform of unity, political analysts say his presidency is unlikely to foster that, despite the margin of victory.

“Investors would like to see his economic team,” said Jonathan Ravelas, chief market strategist at BDO Unibank in Manila. The peso currency PHP=, meanwhile, rose 0.4% against the dollar.

Many among the millions of Robredo voters are angered by what they see as a brazen attempt by the disgraced former first family to use its mastery of social media to reinvent historical narratives of its time in power.

Thousands of opponents of the senior Marcos suffered persecution during a brutal 1972-1981 era of martial law, and the family name became synonymous with plunder, cronyism and extravagant living, with billions of dollars of state wealth disappearing.

The Marcos family has denied wrongdoing and many of its supporters, bloggers and social media influencers say historical accounts are distorted.

Around 400 people, mostly students, staged a protest outside the election commission on Tuesday against Marcos and citing election irregularities.

The Commission on Election (Comelec), which said the poll was relatively peaceful, also upheld on Tuesday its dismissals of complaints filed by different groups, including victims of martial law, that had sought to disbar Marcos from the presidential race based on a 1995 tax evasion conviction.

One of the petitioners, Akbayan, a leftist group, said it will appeal the decision at the Supreme Court, describing it as “both a colossal and institutional failure.”

A big win for Marcos was securing President Rodrigo Duterte’s daughter, Sara Duterte-Carpio, as his vice presidential running mate. She won more than three times the number of votes compared with her nearest rival and also likely broadened the Marcos appeal in many areas.

Human rights group Karapatan called on Filipinos to reject the new Marcos presidency, which it said was built on lies and disinformation “to deodorize the Marcoses’ detestable image”.

Marcos, who shied away from debates and interviews during the campaign, recently praised his father as a genius and a statesman but has also been irked by questions about the martial law era.

As the vote count showed the extent of the Marcos win, Robredo told her supporters to continue their fight for truth until the next election.

“It took time to build the structures of lies. We have time and opportunity to fight and dismantle these,” she said.

Marcos gave few clues on the campaign trail of what his policy agenda would look like, but is widely expected to closely follow outgoing President Duterte, who targeted big infrastructure works, close ties with China and strong growth. Duterte’s tough leadership style won him big support.