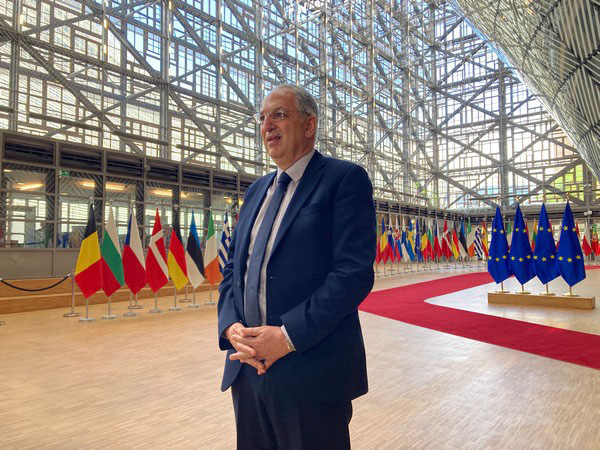 Kadis in Brussels on Tuesday

Cyprus, Lithuania, Luxembourg and Malta on Tuesday proposed a new EU law that would ban people from keeping dangerous or endangered animals as pets.

The four countries presented a position paper proposing the creation of a new EU legislative framework for an EU Positive List for the keeping of companion animals or pets, during Tuesday’s Agriculture and Fisheries Council of the European Union in Brussels.

The proposal, presented by Agriculture Minister Costas Kadis, would allow only a limited number of animal species to be kept as pets, as opposed to a “negative list” which would simply list all species that are banned.

Kadis said that almost all of member states supported the proposal.

He added that the European Commission said it will be working on drafting a legislative proposal which will include the creation of a positive list as per the Cypriot proposal.

In his speech, Kadis had pointed out that the current Convention on International Trade in Endangered Species of Wild Fauna and Flora (CITES) is highly significant in regulating the trade of species at-risk, but “cannot safeguard many wild animal populations that are targeted through the exotic pet trade”.

Kadis also said that already a number of EU countries have adopted a Positive List but “to have a significant impact on biodiversity conservation and animal welfare and protect public health and safety, a coordinated effort is needed at EU level.”

In this context, Cyprus, Lithuania, Luxembourg and Malta call on the Commission “to explore the potential benefits of adopting an EU-wide Positive List, which will be based on the experiences gained by those Member States who have implemented this system,” Kadis added.

He said that millions of wild animals every year are captured from their natural habitats and sold around the world. “It is well-documented that the trade in exotic species is one of the main threats to biodiversity, placing many species in danger of extinction,” he said.

“Wild animals have not evolved to live with humans as pets, and suffer greatly when captured, transported and placed in captivity. Furthermore, wild animals have complex social, behavioural, and nutritional needs that make it extremely difficult for individual owners to provide them with the care they need and, as a result, they are often abandoned,” the minister said.

The proposal comes as a Savannah cat attacked a three-year-old boy in Limassol.

The exotic species appears to have been imported from Moscow, while authorities remain puzzled as to how it passed customs checks amid speculation that the documents were forged.

The boy required hospital treatment after the attack earlier this month.