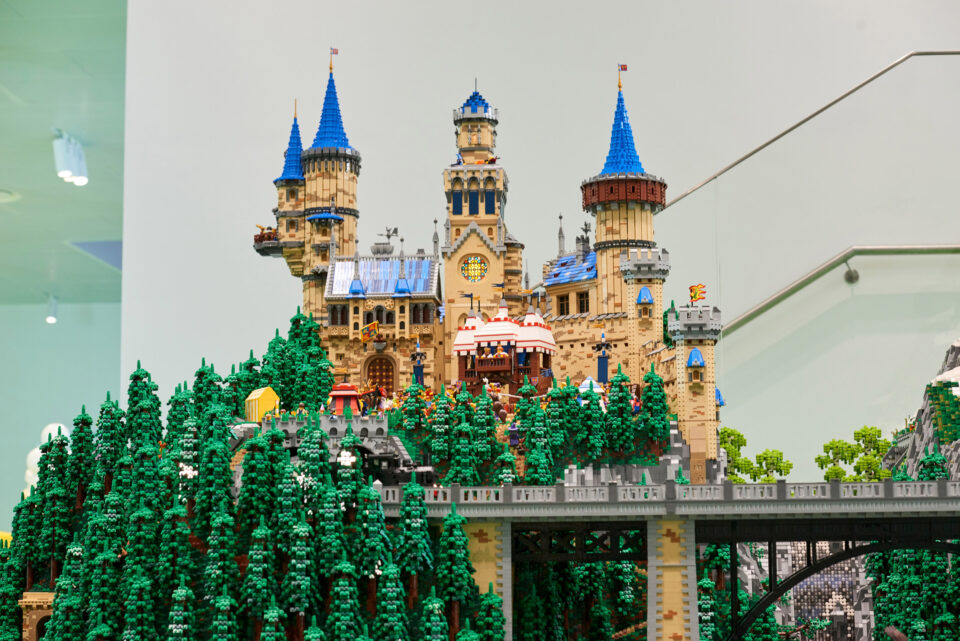 A model at Lego House in Billund. PA Photo/LEGO House.

“Mummy,” my son says, leaning across the breakfast table at Billund’s Hotel Legoland and looking at me intently, “I don’t want to leave here. And if we have to leave, we have to come back… soon.”

For as long as we can remember – and despite living in a house packed to the rafters with plastic bricks – Arthur, who’s now 11, has wanted to stay at a Lego hotel. Windsor Legoland – great as it is – didn’t exactly appeal as a family getaway, considering we live 20 minutes down the road.

But it’s fair to say the kids have had a bit of a rough time of it over the past couple of years and it was time to infuse their lives with a large dose of fun – free of masks and preferably involving at least a short plane hop.

So, you can imagine the look on his face when we told him we were off to stay at the home of Lego in Denmark – where not only would he finally sleep in an actual Legoland bedroom and blast about the original Legoland park, but also visit Lego House – a separate “experience centre” with the added bonus of a playground set out across every section of its roof space.

Furthermore, we planned to create the ultimate kids’ trip by stretching out into the simple beauty of South Jutland, where treetop adventure parks, cooking foraged food over a campfire and tearing along beaches in wind-powered go-carts promised to heal the pain of leaving the Lego mothership.

Billund has the vision of becoming the “best city in the world for children” and mine would argue it’s already achieved that goal.

The small town packs an enormous amount of fun within walkable distance, and our first stop is Lego House, where a central 16 metre-high ‘Tree of Creativity’ built from more than 6.3 million bricks begins a journey around four coloured zones packed with waterfalls, mountains and jungles, made from coloured plastic but teeming with life and movement, and play areas designed to encourage imagination and creativity.

Outside, the building’s staggered block architecture – designed to look like Lego bricks – entices us up brightly-coloured steps to 13 roof terraces, each equipped with a play area.

After finally experiencing drifting off to sleep in the surrounds of a Lego Kingdom Room, it’s off to Legoland itself first thing the next morning, where the relatively small park packs a day full of unique and exciting rides.

We all declare one – the Polar X-plorer – our favourite ever for its totally unexpected shriek moment and delightful view of the resident penguins. We enjoy it so much, we manage to ride it four times.

Our route out of Billund stops after a 10-minute drive to WOW Park, a treetop adventure playground across an area the size of more than 40 football fields.

The park, designed for all ages, is split into six zones full of zip lines, giant nets, climbing paths and swings, all set within the highest branches of a forest.

The kids are off like a shot, disappearing and appearing again metres up in the air, leaping down shutes into enormous nets and soaring about on ziplines and swings. Helpfully, there are chill out zones for any older visitors who might have slightly over-extended themselves showing the youngsters how it’s done, and where you can take a moment to gaze at the sky and listen to the birdsong.

You could easily spend an entire day here and not experience every feature of the park, but we’re moving on through South Jutland towards the Wadden Sea National Park, where the unique biodiversity and intact ecosystem has seen it made the Danish area of a Unesco World Heritage Site.

The peaceful space as far as the eye can see is the perfect antidote to the crowds of Legoland, but there’s fun and adventure here too. We meet Bente from Naturcenter Tonnisgaard, who takes us on a foraging tour to the beach where we collect herbs and flowers for our campfire.

After lunch, it’s back down to the beach of Romo, where a stiff breeze provides the perfect conditions in which to try ‘Blokarting’ down the endless flat beach in three-wheeled carts topped with a sail.

A quick tutorial from instructors at operator KiteSyd teaches us how to control the carts and race safely, and then we’re off towards a yellow flag in the far distance that takes just minutes to get to at exhilarating speed. There’s no stopping the kids, who navigate their way through a regatta before cornering the flag on two wheels and racing their parents back to base. It’s enormous fun in spectacular surroundings at the edge of the sea.

On our final afternoon, we go out in style at the most luxurious campsite any of us have experienced.

Marsk Camp, a five-minute drive from Romo beach, is all Scandinavian style where you can sleep in a tent straight out of a guide to living the Danish hygge dream.

The 24-metre squared glamping tents – with their own terrace and barbecue – have a real bed and a cosy living room with two sofas that can be turned into additional beds, and access to a private shower and toilet.

We spend a lazy afternoon playing the camp’s tournament-approved 18-hole crazy golf course – local gin in hand – before climbing the breathtaking on-site Marsk Tower with its DNA-inspired design. Its double helix shape means there is only one way up and another way down, although this is intriguingly invisible from the ground, while a viewing platform gives a 360-degree view of the beautiful marsh and national park.

By the end of our Denmark adventure, it’s fair to say that none of us want to leave. And yes, we will be coming back soon.

What are Kegel exercises and should you be doing them?