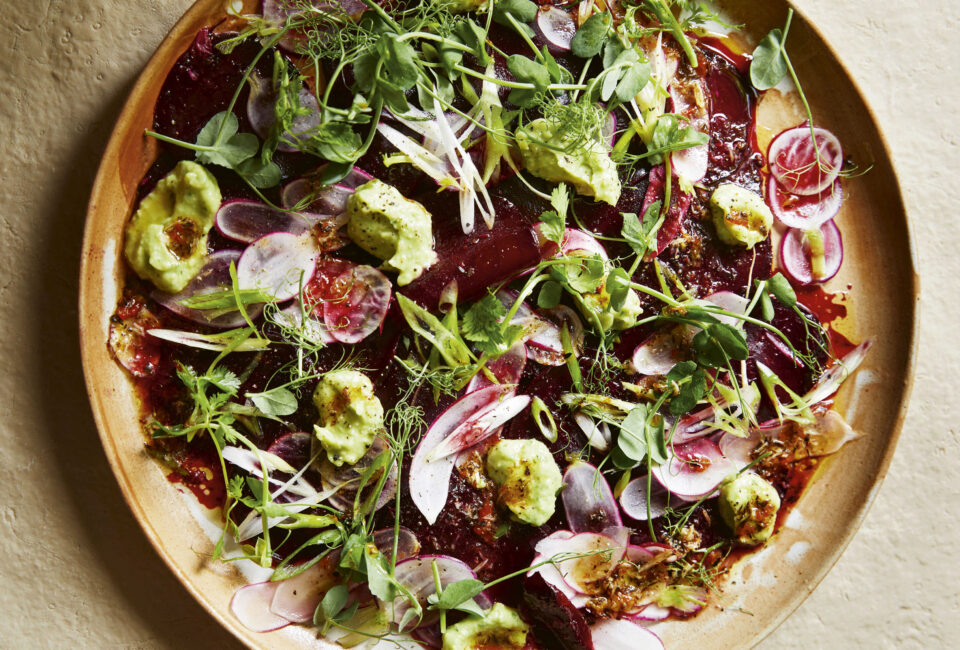 “It’s one of the most biodiverse countries in the world and the foundations of the diet are corn, beans, the courgette plant, tomatoes, chilies and wild herbs,” says Miers, 46. Mexico has around 50,000 native plant species (by some estimates), with some 200 varieties of chilli alone.

Protein often came from moles (a traditional type of sauce made from beans), “enriched with lots of ground seeds”, adds Miers. “The authentic way [to make it] is often very complicated, with 37 ingredients.”

The idea of packing your diet with a rainbow of vegetables is very much the focus of her new book, Meat-Free Mexican. “I think we’re really beginning to think about food as medicine much more these days, which I think is completely right,” she says. Plus, “people are looking at eating less meat anyway, because environmentally, how much meat we’re eating is a total catastrophe.”

For Miers – who won MasterChef in 2005 and is the brains behind the hugely successful Wahaca chain of Mexican restaurants (where 50% of the menus are now vegetarian) – says: “I love that ancient Mexican food and the modern way we’re all kind of starting to eat, feel very in synergy together.”

From plant-based versions of Mexican classics, like beetroot ceviche, celeriac and chard enchiladas, chickpea rancheros and cauliflower tacos, to vegetable dishes that celebrate Mexican spices and flavourings, like chipotle-tamarind baked sweet potato gratin and baked polenta with veracruzan sauce, her eighth cookbook (and her third Mexican-focussed) is, like all of her recipes, for “people who are busy”. So although some are longer, it all feels do-able for the time-starved generation.

For the future of our planet and for our kids, we have to eat less meat, she urges. We’ve got too used to eating whatever we want, at whatever cost to the planet, she suggests. But we can still enjoy a lot of food responsibly. “It’s not about having whatever you want, whenever you want, but it is about flavour and taste, and joy,” says Miers.

Serves 6 as a starter

Juice of 1/2 orange (blood or otherwise)

Rub the beetroot with one tablespoon of the olive oil, followed by a little fine sea salt, pop into a baking tin and cover with foil. Roast for one hour or until tender when pierced with a knife.

Toast the sunflower seeds in a dry frying pan (skillet) until golden. Remove and set aside. Meanwhile, to make the dressing, put the chilli and garlic in the dry frying pan over a medium–high heat and toast on both sides until blackened all over, about five to seven minutes. Toast the cumin seeds for 30 seconds in the same pan.

De-seed the chilli, cut into quarters and peel the garlic. Pound a quarter of the chilli to a paste in a pestle with the garlic and several pinches of salt, the cumin and the sugar. Work in the lime juice and finally pour in the olive oil and orange juice and stir to combine.

Blitz the avocado with the lime juice, one-and-a-half tablespoons of water and the remaining oil. Add the coriander stalks and two to three large pinches of salt and blitz again to a smooth, thick cream.

When the beetroot is cooked, allow to cool for five minutes, then pop on a pair of washing-up gloves and rub away the beetroots’ skin. Slice into rounds about 3mm, preferably with a mandolin. Arrange them in overlapping circles on a large serving plate and dress with the dressing while still warm.

Slice the radishes to paper-thin discs (use the mandolin if you have it). Scatter over the spring onions, coriander and tarragon leaves and the seeds and dot with the avocado cream. Serve at once with the cress or pea shoots.

For the mango dipped in chili salt version:

For the Mexican chocolate version:

To make the mango paletas, skin and stone the mangoes and add the flesh (and as much juice as you can) into a blender. Add the lime zest and juice and agave with 300ml water and blend to combine.

Taste the mixture and add more agave if needed, remembering to sweeten more than you think necessary, as much of the sweetness disappears once the lollies are frozen. Pour into lolly moulds and freeze for at least eight hours.

To make the chili salt, blitz the chillies with the salt in a spice grinder or small food processor, then stir in the sugar and lime zest. Serve the mango paleta dipped into the chilli-lime-salt.

To make the Mexican chocolate paleta, add the milk to a heavy-bottomed saucepan and warm over a low heat with the cinnamon and golden syrup. Take the milk off the heat and stir through the chocolate until completely melted. Leave to cool and then pour into lolly moulds. Freeze for at least eight hours.