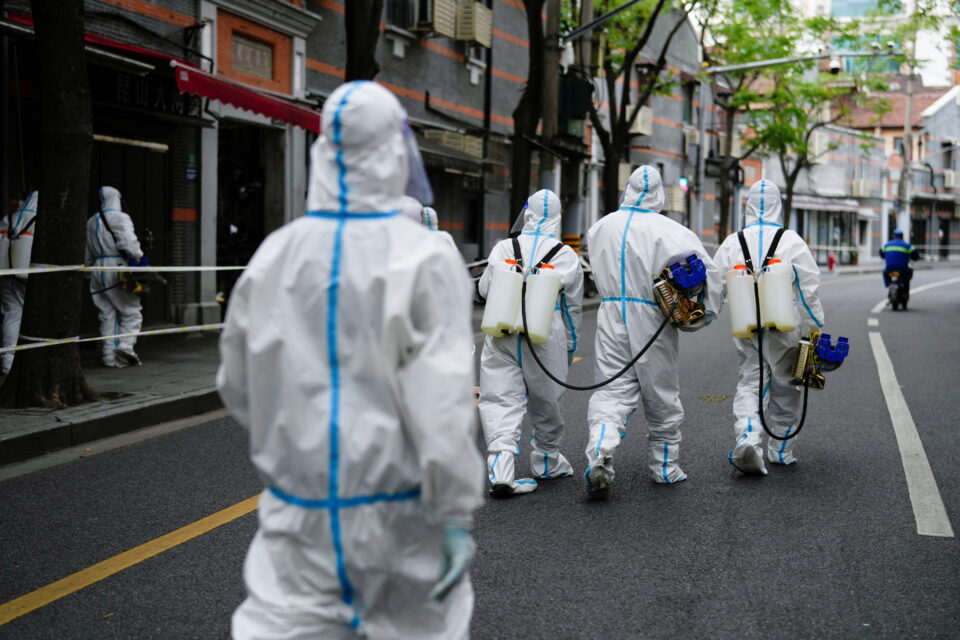 The Chinese metropolis of Shanghai inched further towards a gradual reopening from two months of grinding COVID-19 lockdown, while the capital Beijing maintained curbs that have drastically curtailed movement even as case numbers decline.

Shanghai aims essentially to end its lockdown from Wednesday. More people have been allowed out of their homes and more businesses permitted to reopen in the past week, although most residents remain largely confined to their housing compounds and most shops are limited to making deliveries.

Shanghai officials urged continued vigilance on Saturday, even though the vast majority of its 25 million residents live in areas that are in the lowest-risk “prevention” category.

Videos on social media showed Friday night revellers including many foreigners drinking and dancing in the street in a central area of the city, interrupted by police telling them to go home.

Another video showed a group in the street singing an emotional anthem from 1985 called “Tomorrow will be better,” accompanied by a keyboard player. The police arrive, allowing the song to finish before asking them to go home, prompting online praise for the show of restraint.

The two-month lockdown of China’s largest and most cosmopolitan city has frustrated and infuriated residents, hundreds of thousands of whom have been quarantined in often crowded central facilities. Many residents struggled to access sufficient food or medical care during its early weeks.

While nationwide case numbers are improving, China’s strict adherence to zero-COVID has devastated the world’s second-largest economy and rattled global supply chains, alarming investors worried about the lack of a roadmap for exiting from what has been a signature policy of President Xi Jinping.

China’s approach, which Beijing says is needed to save lives and prevent its health system from being overwhelmed, has been challenged by the hard-to-contain Omicron variant. Much of the world, by contrast, is trying to get on with normal life despite the continued spread of coronavirus.

The conflict between vanquishing the spread of COVID and supporting the economy comes amid a politically sensitive year, with Xi expected to secure an unprecedented third leadership term at a congress of the ruling Communist Party in the autumn.

During an emergency meeting on Wednesday, Premier Li Keqiang acknowledged the weak growth and said economic difficulties in some aspects were worse than in 2020 after China was initially hit by COVID-19. His remarks prompted market expectations of further measures to support the economy. Read full story

On Friday, Shanghai’s suburban Fengxian district cancelled a requirement for residents to have a pass to go out.

The state-run Shanghai Securities News reported modest steps towards return to normal for the financial sector, with the more than 10,000 bankers and traders who have been living and working in their offices since the start of lockdown gradually returning home.

China Citic Bank’s Shanghai branch plans to send nearly 30 staff to its office tower by Wednesday while 11 staff members at Bank of Shanghai returned to work this week at its office headquarters, the newspaper reported. More than 100 bank outlets had resumed operations as of Friday, it said.

China on Saturday reported 362 daily coronavirus cases, down from 444 a day earlier. In Beijing, much of which has been under tight curbs this month, new Friday infections fell to 24 from 29.

While Shanghai officials reported one community-level case in its Songjiang district, they expressed confidence in the measures they were taking to trace and control the infection chain.

“If these measures are implemented effectively, we can prevent a rebound of the epidemic even if there are sporadic cases, so don’t worry,” said Sun Xiaodong, deputy director of the Shanghai Center for Disease Control and Prevention.