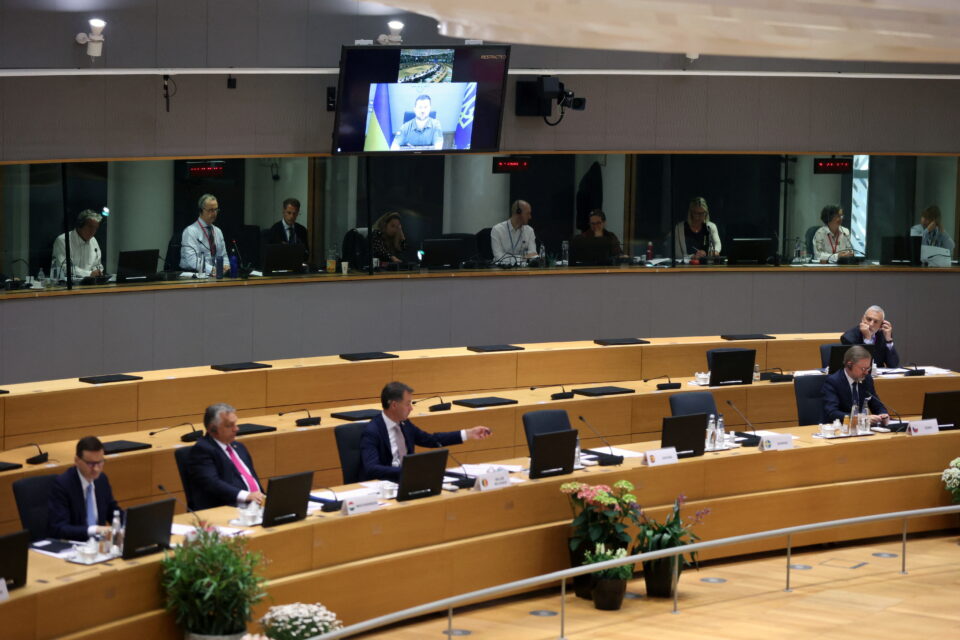 EU leaders on Monday made clear they would fail to agree on a Russian oil import ban at a summit in Brussels, prompting swift criticism from Ukrainian President Volodymyr Zelenskiy who chastised them for being too soft on Moscow.

The European Union has rolled out five packages of sanctions since Russia invaded Ukraine more than three months ago, demonstrating uncharacteristic speed and unity given the complexity of the measures.

But the lack of agreement on a sixth package – and in particular on an oil ban – exposed a struggle to widen sanctions as the economic risk for Europe grows, because so many countries depend on Russian crude.

The leaders of the 27 EU countries are set to agree at the two-day summit on the principle of an eventual oil embargo, a draft of their summit conclusions showed.

But they will leave the hard decisions for later.

“There is no compromise for this moment at all,” Hungarian Prime Minister Viktor Orban, whose country has been the main holdout for a deal, said as he arrived for the summit.

European Commission President Ursula von der Leyen, who proposed the latest package of sanctions at the start of May, agreed: “We’re not there yet.”

There is broad agreement on the rest of the package, including cutting Russia’s biggest bank, Sberbank SBMX.MM, from the SWIFT messaging system, banning Russian broadcasters from the EU and adding people to a list whose assets are frozen.

But Zelenskiy denounced the lack of EU resolve.

“Why are you dependent on Russia, on their pressure, and not vice-versa? Russia must be dependent on you. Why can Russia still earn almost a billion euros a day by selling energy?” Zelenskiy asked the EU leaders.

“Why are terrorist banks still working with Europe and the global financial system? Serious questions,” he said.

Estonian Prime Minister Kaja Kallas said it was more realistic to expect an agreement on an oil embargo in a few weeks, hopefully at the EU’s next summit on June 23-24.

Some complained harshly over the lack of a deal.

The draft text seen by Reuters – which may still be revised again – would confirm that the sixth package of sanctions will include a ban on seaborne oil imports, with pipeline oil supplied to landlocked Hungary, Slovakia and the Czech Republic to be sanctioned at some later point.

However, the leaders will task diplomats and ministers to agree how it would work, including by ensuring fair competition between those still getting Russian oil and those cut off.

Orban said Hungary would be ready to back a deal “if there are solutions for the Hungarian energy supply security, we haven’t got that now”.

Hungary receives Russian oil via a pipeline that runs through Ukraine. After initially asking for an exemption for pipelines, it has added new demands and now seeks assurances on supply.

“Each time there is an issue on the table and technical solutions to resolve it are being offered, new demands are being raised … it’s a moving target, impossible to reach a deal that way,” one EU diplomat said.

One tangible outcome of the summit should be agreement on a package of EU loans worth 9 billion euros ($9.7 billion), with a small component of grants to cover part of the interest, for Ukraine to keep its government going and pay wages for about two months.

Leaders will also back the creation of an international fund to rebuild Ukraine after the war, with details to be decided later.

The leaders will also pledge to accelerate work to help Ukraine move its grain out of the country to global buyers via rail and truck as the Russian navy is blocking the usual sea routes.