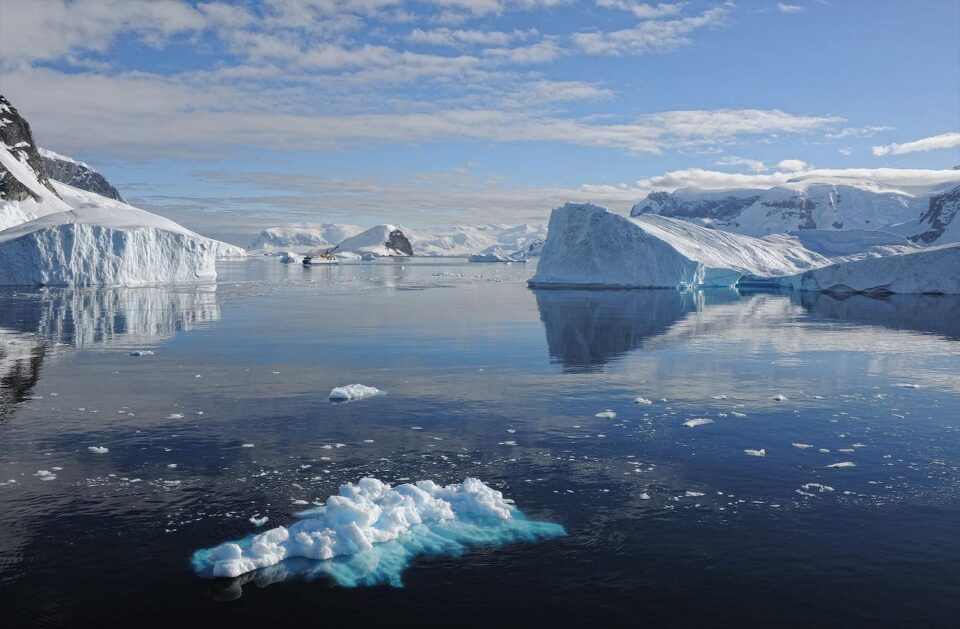 Ice-streams are moving faster and faster as oceans are warming

“Ninety per cent of ice flowing to the sea from the Antarctic ice sheet, and about half of that lost from Greenland, travels in narrow, fast ice streams measuring tens of kilometres or less across. Stemming the largest flows would allow the ice sheets to thicken, slowing or even reversing their contribution to sea-level rise.”

John Moore, a British glaciologist holding dual appointments at Lapland and Beijing Normal universities, had a big idea a few years ago. The big ice-streams are moving faster and faster because the oceans are warming, and warm currents are eating away at the underside of those glaciers where they meet the ocean. So stop them.

The warm currents are deep, because salty seawater is denser than the fresh water coming off the glaciers. When they melt the lowest part of the ice-stream where it meets the ocean the glaciers lose contact with the underlying rock, and the friction with the rock was what slows them down. They can speed up three, five even ten times faster.

However, the problem is smaller than it seems. Greenland and Antarctica, where the ice is up to two kilometres deep, have about 70,000 kilometres of coastline, but the total length where the ice-streams reach the sea is only 200km or less.

Stop the accelerated melt there, and the human race might win an extra century or two to cope with all the other challenges posed by global warming without having to wage a continuous struggle to protect itself from rapidly rising sea levels at the same time.

So Moore and a handful of colleagues set out to see how we might divert those warm currents. “The warm currents run along the bottom of the sea floor, so if you [created an obstacle high enough that] the warm water couldn’t flow over it, it would slow that ice shelf melting and the ice shelf would immediately thicken,” he recalled.

They chose the Thwaites glacier, the so-called ‘Doomsday glacier’ in Western Antarctica, for their thought experiment.

“At Thwaites, the most vulnerable ice shelf on the planet, the major inflow of warm water is through a channel four kilometres across. And we initially thought, as stupid scientists, that we would just block that (four-kilometre channel) with rubble or dirt, you know, make a dam,” Moore recalled.

But he and a handful of colleagues had the wit to put out an all-call for better ideas in a leading scientific journal. “The engineers laughed at us, slapped us around the face, and said ‘Don’t be so stupid. You don’t want to have bulldozers or something on the sea floor.”

“You want to go in with a design that can be removed in case of unexpected consequences or to do maintenance. So the idea is to have a concrete base as an anchor, and then a buoyant curtain attached to it. The buoyancy wants to keep the curtain vertical, the currents want to push it over, and there will be an equilibrium where it resists that flow.”

The engineer in question (who didn’t actually slap Moore around the face) was Bowie Keefer, a Canadian engineer living on Galiano Island in British Columbia’s Gulf Islands. “I was inspired by the kelp bed that we have off a beach here on Galiano. A kelp bed consists of streamers of vegetation attached to the seabed and stretched upward by a buoyant bulb at the top.”

“Paddling a kayak through the kelp bed, it occurred to me that if you attached those streamers together, you would then have a curtain. And if we built a buoyant, flexible artificial curtain up to 300 metres high, attached to the seabed, fish and whales, and even icebergs, could go over the top (in the cold, fresh water), but block the warm water from coming in and protect the ice sheet.”

That’s the plan, and Moore’s team has a tentative budget. “It would cost about $5 billion a year over ten years to install the curtain, and ongoing maintenance would cost one or two billion a year thereafter. That includes a fleet of five icebreakers, ten ice-reinforced ships, fabrication of the curtain in southern Chile, the lot.”

And then there’s the several dozen other, smaller glaciers that would also need to be blocked. But it would still be ten or twenty times cheaper than building dykes and barriers to protect the world’s coastlines from sea level rise. Better to attack the problem at its source.