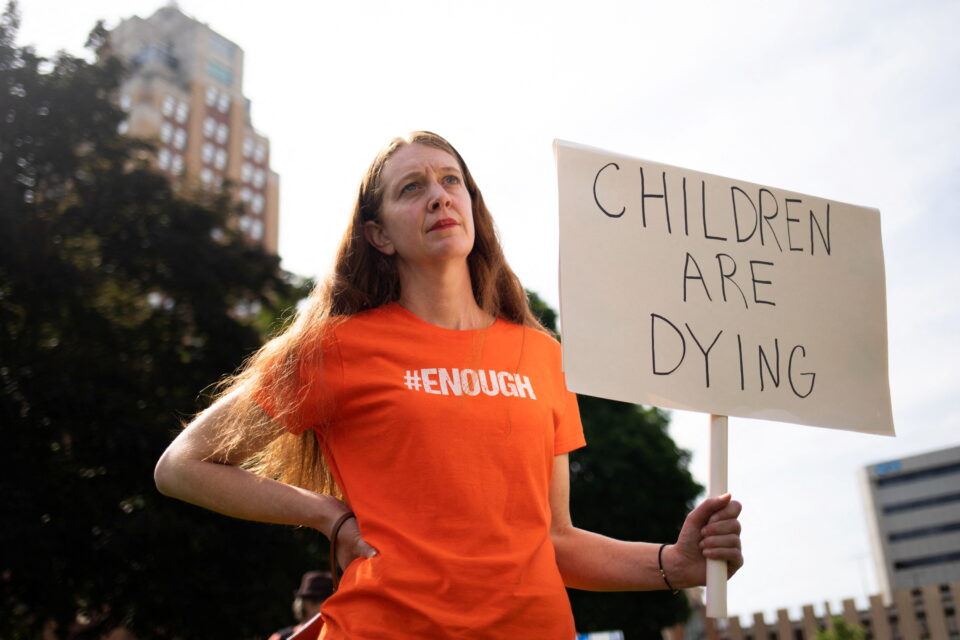 Andrea Sellman of Ypsilanti holds a sign during a March for Our Lives rally for gun control in Lansing, Michigan, U.S., June 11, 2022. REUTERS/Emily Elconin

In a potential breakthrough toward the first significant new U.S. gun law in decades, a bipartisan group of senators on Sunday announced an agreement on a framework for a firearms safety bill with enough Republican support to advance in the narrowly divided Senate.

The plan, lauded by President Joe Biden, includes support for state “red flag” laws keeping firearms from potentially dangerous people, tougher criminal background checks for gun buyers under age 21 and a crackdown on “straw purchases” by people buying weapons for others who could not pass a background check.

Crafted in the aftermath of last month’s massacres at an elementary school in Uvalde, Texas and a supermarket in Buffalo, New York, the framework is far less ambitious than proposals offered by Biden and other Democrats for banning semi-automatic, assault-style rifles and high-capacity magazines or at least raising the minimum age to buy those from 18 to 21.

Democratic Senator Chris Murphy, who led the negotiating effort alongside Republican Senator John Cornyn, said “the heavy lifting is behind us” after three weeks of intensive talks, though a “significant amount of work” remains. Murphy said he hoped for Senate passage by early August or sooner.

The deal was announced a day after tens of thousands of people rallied in Washington and around the United States to urge lawmakers to pass legislation to curb gun violence.

While an important breakthrough, the agreement does not ensure that legislation will be approved. Lawmakers still must hammer out legislative language that can attract enough votes to pass in both the Senate and House of Representatives, each narrowly controlled by Democrats.

Republican opposition has been instrumental in thwarting Democratic-backed gun control proposals in Congress dating back to the 1994 passage of an assault weapons ban that expired a decade later.

The United States has the highest rate of firearms deaths among the world’s wealthy nations. But it is a country where many cherish gun rights and its Constitution’s Second Amendment protects the right to “keep and bear arms.”

Sunday’s announcement marks the furthest that gun reform talks have advanced in Congress since 2013, when legislation failed on the Senate floor following a 2012 Connecticut elementary school massacre. Murphy, who represents Connecticut, has dedicated a major part of his decade-long Senate career to gun control following that tragedy.

“Our plan saves lives while also protecting the constitutional rights of law-abiding Americans,” Murphy and Cornyn said in a joint statement.

The group agreeing to the framework included 10 Republicans, nine Democrats and one independent who caucuses with the Democrats.

A National Rifle Association spokesperson said the influential firearms rights group will not take a position on the framework until the detailed legislative text is finalized. She said the NRA would oppose any effort depriving Americans of their gun rights.

“There had been conventional wisdom that politicians had bought into that you could not cross the NRA. Otherwise you would pay,” said Christian Heyne, vice president of policy for the Brady gun control group, told Reuters.

With 10 Republicans indicating support, that would overcome the Senate’s “filibuster” rule requiring 60 of the 100 senators to agree to advance most legislation. Republicans opposed to the plan are expected to mount procedural hurdles in a bid to block it.

Senate Republican Leader Mitch McConnell stopped short of embracing the framework but said he hoped for progress in the bipartisan talks.

“It does not do everything that I think is needed, but it reflects important steps in the right direction, and would be the most significant gun safety legislation to pass Congress in decades,” Biden said in a statement. “With bipartisan support, there are no excuses for delay, and no reason why it should not quickly move through the Senate and the House.”

Senate Majority Leader Chuck Schumer said that he wanted to move a bill quickly once legislative details are finalized. House Speaker Nancy Pelosi also backed the deal, saying in a statement: “While more is needed, this package will take steps to save lives.”

The measure would provide federal funding to encourage states to adopt “red flag” laws keeping guns away from people found by courts to be a significant danger to themselves or others.

Congress would provide more funding to expand mental health programs including ones run in schools, and would crack down on those who evade gun-licensing requirements or illegally buy guns on behalf of others – transactions called “straw purchases.”

The plan also would require new government checks on those under 21 who try to buy guns so that juvenile mental health records can be reviewed, along with checks with state and local law enforcement agencies.

FACTBOX: What’s in and what’s out

The proposal would provide resources to states and Native American tribes to create and administer “red flag” measures intended to ensure weapons are kept out of the hands of people whom a court has determined to be a significant danger to themselves or others. These measures would be consistent with state and federal due process and constitutional protections.

During an impassioned June 2 speech, Democratic President Joe Biden urged Congress to re-impose the federal ban on assault weapons that expired in 2004, which prohibited the manufacture, transfer and possession of semi-automatic assault weapons and the transfer and possession of large-capacity ammunition feeding devices. That measure faces staunch opposition from Republicans in Congress and is not in the framework agreement released on Sunday.

IN: ENHANCED REVIEW PROCESS FOR BUYERS UNDER 21

The framework calls for an investigative period to review the juvenile criminal and mental health records for gun buyers under 21 years of age. This would include checks with state databases and local law enforcement.

The proposal does not include a provision to raise the age for buying a semiautomatic rifle to 21 nationwide. Currently the minimum age to buy is 18. Federal law already prohibits anyone younger than 21 legally buying a handgun.

IN: PENALTIES FOR “STRAW PURCHASES”

If passed, the new law would crack down on criminals who illegally straw purchase and traffic guns. A straw purchase occurs when a person buys a weapon for someone who is not legally allowed to buy one.

The framework does not include proposals to expand federal background checks to buy a weapon from three to 10 days. It also does not close a loophole in federal law that allows many sales over the internet and at gun shows to go unchecked.

OUT: REPEAL OF LIABILITY SHIELD

The proposed framework makes no mention of amending or repealing a federal liability shield that protects gun manufacturers from being sued for violence carried out by people carrying, and shooting, their guns.

The framework would also clarify the definition of a federally licensed firearms dealer and crack down on criminals who illegally evade licensing requirements.

IN: PROTECTIONS FOR DOMESTIC VIOLENCE VICTIMS

The proposed framework calls for funding to expand mental health and supportive services in schools, including early identification and intervention programs.

All you need to know about dragonflies but didn’t ask