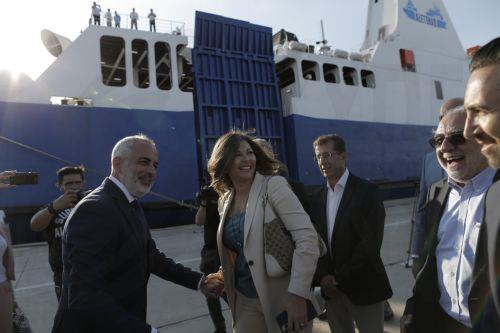 The first ferry trip between Cyprus and Greece in 21 years dropped anchor in the Greek port of Piraeus at 6.30pm on Monday afternoon, marking the reconnection between the ports of Limassol and Piraeus after a 21-year hiatus.

The Daleela was warmly welcomed by Greece’s Deputy Minister of Shipping Sophia Zacharaki, who met her counterpart Vassilis Demetriades and other passengers as they disembarked.

The journey was earlier hailed as “very positive” by Demetriades speaking onboard.

“As President Anastasiades said yesterday, the umbilical cord between the two countries is being reattached with this voyage. I call on both Cypriots and Greeks to embrace it to make it sustainable and enjoy it forever,” he said.

The vessel will make a total of 22 trips this season, four in June, eight in July, seven in August and three in September.

Motorcyclists, pensioners, nervous flyers and students are just some of the 173 people who took the maiden voyage, with a travel time of 30 hours.

The deputy minister said that the first impressions have been overwhelmingly positive, adding that there was live entertainment onboard, along with amenities such as cafés and restaurants.

He emphasised that any issues which may arise, as are expected during such a project, will be worked out and improved.

Some passengers were surprised to learn that there is no Wi-Fi onboard.

The deputy minister addressed those concerns by explaining that such a feature would be very expensive for the company to provide but that it is something which can be looked at in the future, if it is indeed an issue.

“This is a point but not something which is linked to the specific company, it’s a factor for all boats,” Demetriades said.

He reminded the public that 5G remains an option.

Asked as to who his fellow travellers are, and why they chose the ferry, Demetriades said that he has spoken to motorcyclists who have eagerly been awaiting the ferry for years.

Elsewhere, he spoke to people who last travelled on the ferry link over two decades ago and wished to relive the experience.

Demetriades also explained how some students have opted for the boat as it is easier for them to transport more personal items and luggage than by plane, and at a cheaper cost. Naturally, there were some nervous flyers amongst the passengers, too.

The first trip ferried Demetriades, tourism minister Savvas Perdios, Limassol Mayor Nicos Nicolaides, some MPs, journalists, and members of the team that worked on the project.

The last ferry voyage between Greece and Cyprus took place on October 8, 2001 with the ship Salamis.

For its part, the Cyprus Ports Authority hailed the reconnection of Cyprus and Greece by ferry and stressed the importance of the coastal connection for the island with Greece and by extension with Europe.

“The resumption of the Cyprus-Greece ferry connection is a historic moment for our country. After 21 years of the absence of this option, now there is this option for everyone,” President of the Cyprus Ports Authority Antonis Stylianou said.

Airlines confident of narrowing losses, lash out at governments