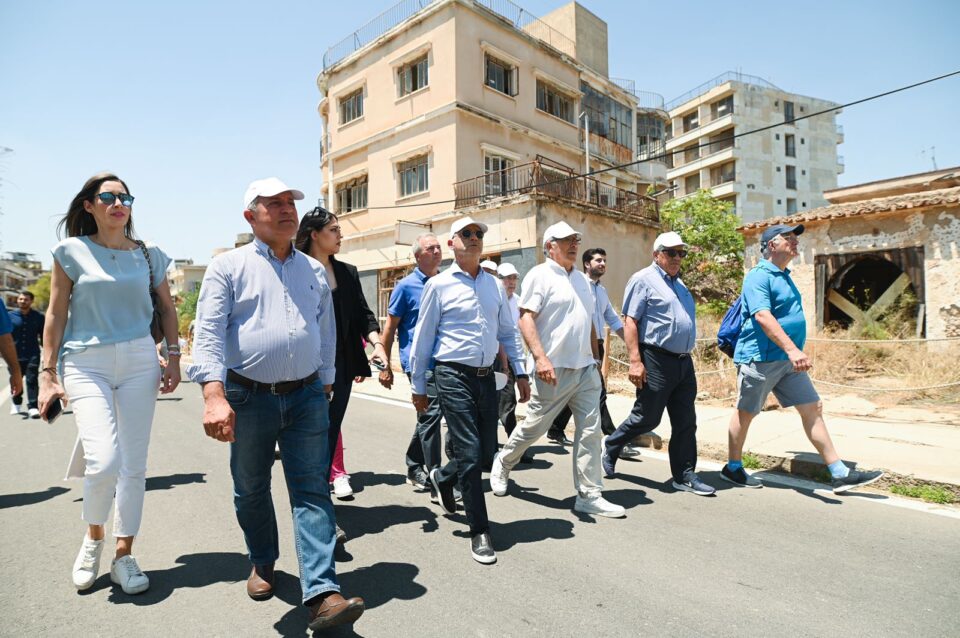 Disy leader and presidential candidate Averof Neophytou visited Varosha on Wednesday and warned that if the city is lost then Cyprus, too, is lost.

“Dear Varoshians, our Varosha is the symbol of our struggle to free and unite our homeland – if Varosha is lost, then our Cyprus is lost,” he said.

Neophytou’s statements to the media were made along the beachfront just ahead of the King George Hotel, near the location where the crumbling hotels stretching along the coast have long been photographed.

He warned that we are living through an outbreak of Turkish provocations and revisionism.

“Standing here in occupied Varosha, I would also like to send a message to our Turkish Cypriot compatriots,” he said.

“Try and stop the crime, press Turkey, pressure your leadership to stop this looting.”

He stressed that Turkish Cypriots will also be victims in the absence of a solution to the Cyprus problem, sooner or later, and by then, it will be too late for both Greek Cypriots and Turkish Cypriots.

When a reporter put to him that Varosha appears to already have been lost, he replied that “we cannot allow Varosha to be lost.”

“I will never allow it, that is why I am also calling on the Turkish Cypriots to close the roads which lead towards the looting of Varosha.

“I am here for my homeland, not for the elections,” he added, emphasising that he is calling on everyone to unite their efforts.

Neophytou’s visit comes amid increasing sharp rhetoric emanating from Ankara, accusing Greece of militarising islands in the Aegean, in violation of international agreements.

And in Cyprus, official negotiations have been frozen since the failed Crans Montana talks in 2017.

Earlier this year, Turkish Cypriot leader Ersin Tatar declared that ‘fenced-off Varosha’ is no more as that is the city’s old name, claiming that it is now open.

Last October, the north announced that 3.5 per cent of Varosha, around five square kilometres, has been reclassified and demilitarized, with plans to open it for settlement on a pilot basis.

Tatar has previously vowed that the Turkish Cypriot side would not stop “until every last square metre” of Varosha was reopened.

Select parts of Varosha were initially reopened in October 2020, a move which later led the Cyprus government to rescind the Cyprus Republic passports of 14 Turkish Cypriots, including Tatar.

Elsewhere, it was announced this week that two million visits by foreign nationals and more than one million by Greek Cypriots were made to the north in the first five months of this year.

Envisioning a future for traditional handicrafts through contemporary art

Why is there a worldwide oil-refining crunch?