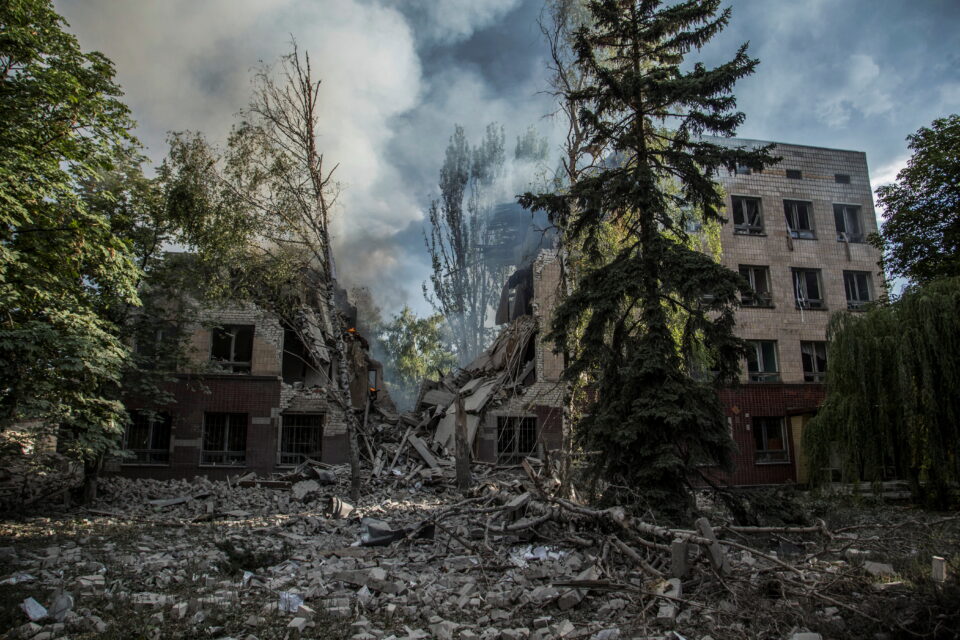 Russian forces were fighting on Monday to achieve one of their strategic objectives in Ukraine as Moscow-backed separatists said they were pushing into Lysychansk, the last major city still held by Ukrainian troops in eastern Luhansk province.

Lysychansk’s twin city of Sievierodonetsk fell on Saturday in a victory for Moscow’s campaign to seize the eastern provinces of Luhansk and Donetsk on behalf of pro-Russian separatists.

Tass news agency on Sunday quoted a separatist official as saying Moscow’s forces had entered Lysychansk from five directions and were isolating Ukrainian defenders. Reuters could not confirm the report.

The General Staff of Ukraine’s Armed Forces said Russian forces were using artillery to try to cut off Lysychansk from the south but made no mention of separatists entering the city.

Elena, an elderly woman from Lysychansk, was among dozens of evacuees who arrived in the Ukrainian-held town of Pokrovsk by bus from frontline areas.

“Lysychansk, it was a horror, the last week. Yesterday we could not take it any more,” she said. “I already told my husband if I die, please bury me behind the house.”

The RIA agency quoted a separatist official as saying separatist forces had evacuated more than 250 people, including children, on Sunday from Sievierodonetsk’s Azot chemical plant.

The industrial area was the last part of Sievierodonetsk held by Ukrainian forces before they withdrew on Saturday after weeks of heavy fighting which left the town in ruins.

Russian missiles struck an apartment block and close to a kindergarten in Kyiv on Sunday as world leaders gathered in Germany to discuss further sanctions against Moscow.

Deputy Mayor Mykola Povoroznyk said one person was killed and six wounded in the first Russian attack on the capital in weeks.

In his nightly address, Ukrainian President Volodymyr Zelenskiy said a wounded seven-year-old girl was pulled from the rubble of a nine-storey apartment block. The girl’s father was killed in the strike, he said.

“She was not threatened by anything in our country. She was completely safe, until Russia itself decided that everything was equally hostile to them now – women, children, kindergartens, houses, hospitals, railways,” Zelenskiy said.

A Ukrainian air force spokesperson said the strike was carried out with four to six long-range missiles fired from bombers more than 1,000 km (621 miles) away in southern Russia.

U.S. President Joe Biden called the strikes acts of “barbarism”, as leaders from the Group of Seven nations gathered for a summit in Germany. Russia denies targeting civilians.

Other G7 leaders mocked Russian President Vladimir Putin as they gathered for a group photograph at the summit. R

British Prime Minister Boris Johnson suggested the leaders bare their chests and “show them our pecs” in reference to Putin’s shirtless poses over the years, including on horseback.

Britain, Canada, Japan and the United States proposed a ban on imports of gold from Russia, aimed at wealthy Russians who have been buying safe-haven bullion to reduce the financial impact of Western sanctions.

The leaders gathered in the Bavarian Alps are also expected to discuss a possible price cap on Russian oil and efforts to tackle soaring global food and energy prices.

The United States is likely to announce this week the purchase of an advanced medium to long range surface-to-air missile defense system for Ukraine, a source familiar with the matter told Reuters on Sunday.

Russian missiles also on Sunday struck the central city of Cherkasy, which until now had been largely untouched by bombardment, according to authorities who said one person was killed and five others wounded.

“They are trying to limit the transfer of our reserves and Western weapons to the east,” he told Reuters.

Russia’s defence ministry said it had used high-precision weapons to strike military training centres in the regions of Chernihiv, Zhytomyr and Lviv, an apparent reference to strikes reported by Ukraine on Saturday. There was no immediate comment about Sunday’s strikes on Kyiv or Cherkasy.

Russia invaded Ukraine on Feb. 24 in what the Kremlin called a “special military operation” to rid the country of far-right nationalists and ensure Russian security.

Kyiv and the West dismiss that as a baseless pretext for a war of choice that has killed thousands, sent millions fleeing Ukraine and destroyed cities.

The conflict has driven up gas, oil and food prices, pushed the European Union to reduce reliance on Russian energy, and prompted Finland and Sweden to seek NATO membership.

Russia edged closer to a default on Sunday amid little sign that investors holding its international bonds had received payment, heralding what would be the nation’s first default in decades.