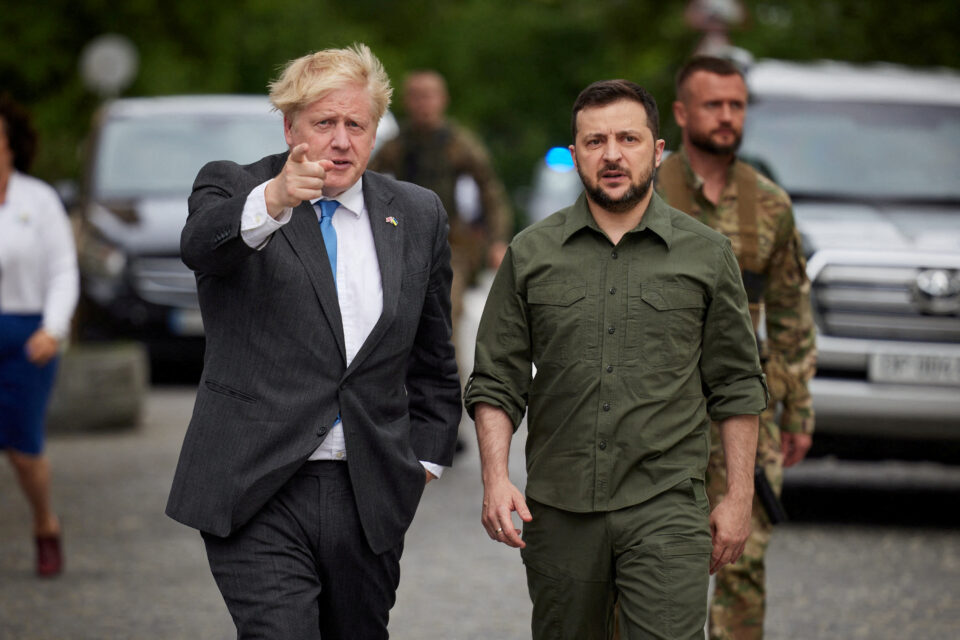 Ukrainian forces raised their national flag on a recaptured Black Sea island on Thursday in a defiant act against Moscow, but Kyiv lost a main international supporter after British Prime Minister Boris Johnson said he would step down.

Moscow did not conceal its delight at the political demise of Johnson, a leader whom it has long criticised for arming Kyiv so energetically.

“The moral of the story is: do not seek to destroy Russia,” Russian Foreign Ministry spokeswoman Maria Zakharova said. “Russia cannot be destroyed. You can break your teeth on it – and then choke on them.”

Johnson said Britain’s support for Ukraine would continue regardless but his resignation comes at a time of domestic turmoil in some other European countries that support Kyiv amid doubts about their staying power for what has become a protracted conflict.

Mykhailo Podolyak, a Ukrainian presidential adviser, thanked Johnson, saying he had been someone who had “began to call a spade a spade from the beginning”.

Moscow was fast to respond to Ukraine’s defiant flag-raising ceremony on Snake Island, located about 140 km (90 miles) south of the Ukrainian port of Odesa.

Its warplanes struck the strategic island shortly afterwards and destroyed part of the Ukrainian detachment there, it said.

Russia abandoned the Snake Island at the end of June in what it said was a gesture of goodwill – a victory for Ukraine that Kyiv hoped could loosen Moscow’s blockade of Ukrainian ports.

Images released by Ukraine on Thursday showed three Ukrainian soldiers raising the blue and yellow national flag on a patch of ground next to the remains of a flattened building.

Andriy Yermak, the Ukrainian president’s chief of staff, suggested the moment was one that would be repeated across Ukraine in the coming months.

“The flag of Ukraine is on Snake Island. Ahead of us are many more such videos from Ukrainian cities that are currently under temporary occupation,” he wrote on Telegram.

In Moscow, the Russian defence ministry said several Ukrainian troops had landed on the island before dawn.

Snake Island became a symbol of Ukraine’s refusal to bend to Russia’s will early in the war after Ukrainian forces stationed there delivered a salty riposte when asked by the commander of a Russian ship to surrender.

Russian forces in eastern Ukraine meanwhile kept up pressure on Ukrainian troops trying to hold the line along the northern borders of the Donetsk region, in preparation for an anticipated wider offensive against it.

After taking the city of Lysychansk on Sunday and effectively cementing their total control of Ukraine’s Luhansk region, Moscow has made clear it is planning to capture parts of the neighbouring Donetsk region which it has not yet seized. Kyiv still controls some large cities.

Donetsk regional governor Pavlo Kyrylenko, who has complained of intense Russian shelling in recent days, said that seven civilians had been killed by Russia in the region over the last 24 hours.

The mayor of the eastern Ukrainian city of Kramatorsk said Russian forces had fired missiles at the city centre in an air strike on Thursday and that there were casualties.

Reuters could not independently verify those assertions. Russia’s defence ministry says it does not target civilians and uses high precision weapons to eliminate military threats.

The Ukrainian military said Russian forces were moving more units into the Luhansk region in order to consolidate Moscow’s control there.

On Wednesday, Ukrainian officials had said that fighting was underway on the northern border between the Luhansk and Donetsk regions as Russian forces tried to make new inroads.

But after Russian President Vladimir Putin said he wanted troops involved in capturing the Luhansk region to rest, a full offensive has yet to materialise.

The U.S.-based Institute for the Study of War said Russia did not appear to have taken any new territory since its capture of Lysychansk on Sunday.

It assessed that “Russian forces are conducting an operational pause while still engaging in limited ground attacks to set conditions for more significant offensive operations”.

In the frontline city of Bakhmut, smoke rose from nearby hills where Ukrainian forces fired off artillery rounds, drawing Russian volleys in response.

Olena Kandeluk, 53, said shelling had increased in recent days as the fighting moved closed after the fall of Lysychansk.

“We have crops to harvest. Some fields have burned,” she said, explaining why she had stayed.

Some fields had been charred by Ukrainian rocket launches and others by incoming Russian fire, she said.

Putin launched his invasion on Feb. 24, calling it a “special military operation”, to demilitarise Ukraine, root out what he said were dangerous nationalists and protect Russian speakers in that country.

Bye bye Boris: Johnson bows out with regrets but no apologies (Updated)