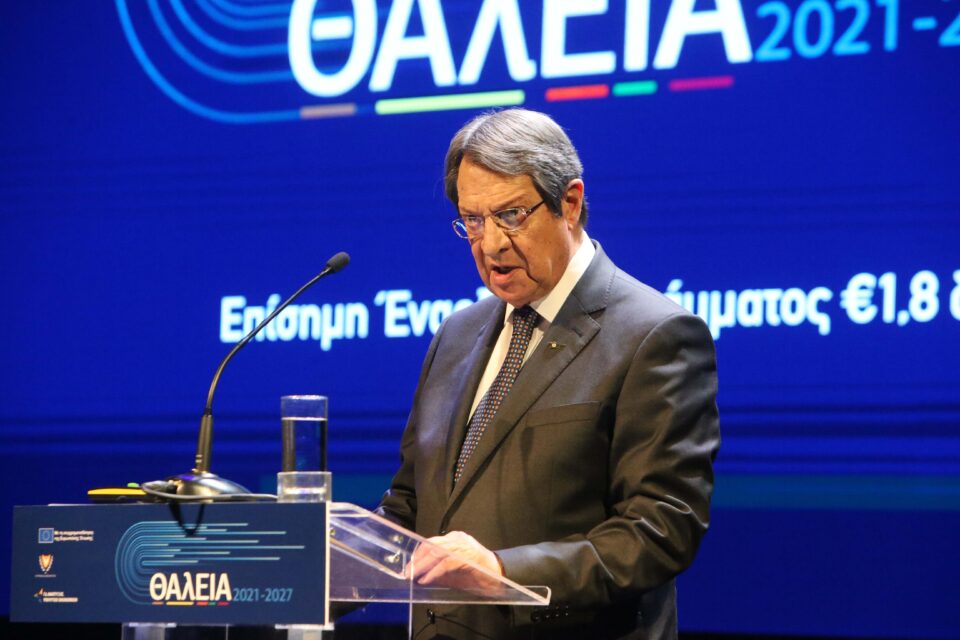 President Nicos Anastasiades on Friday hailed the approval of Cyprus’ social cohesion policy programme Thalia 2021-2017, calling it a landmark moment in the country’s efforts to restructure and evolve its economic and social models.

Anastasiades’ comments came during a speech at the Cyprus Theatre Organisation (Thoc), which he visited along with EU Commissioner for Cohesion and Reforms Elisa Ferreira, who is on an official visit to Cyprus.

The president thanked the commissioner for her visit, saying that this acknowledges Cyprus being the first country to receive approval for its social cohesion policy programme.

“Cyprus’ high performance in the absorption of European funds, combined with the successful claim for increased funding, is not only due to the targeted efforts of the government and the close and constructive cooperation we have developed with the European Commission, but also to the remarkable members of the public service, which I warmly thank and congratulate,” the president said.

“It also proves once again that little Cyprus can boast that it does not lack capabilities compared to the rest of its partners within the European Union,” he added.

The total amount for the implementation of the Thalia programme amounts to €1.8 billion, with a national contribution of €840 million.

Anastasiades said that the programme aims to reshape the Cypriot economy so that it becomes more robust and competitive.

This, he explained, will be achieved through “smart, digital and green investments, under conditions of healthy employment and social cohesion, in full alignment with the policies and objectives of the European Union”.

This includes the implementation of more than 120 projects and funding programmes across five distinct pillars.

The president said each respective government minister will provide additional details in the coming days.

The first area of investment, with a budget allocation of €312 million, concerns the digital transition, innovation and entrepreneurship.

The second area, with €783 million allocated to it, concerns the green transition. It will include a number of schemes and investments that will promote the circular economy and the use of renewable energy sources, boost biodiversity initiatives, promote urban mobility, and combat climate change.

Of that amount, €187 million will be sourced from the Just Transition Fund, a tool created to support the countries and regions most affected by the transition toward climate neutrality.
“This will speed up the penetration of renewable energy sources in the country’s energy mix, which we all acknowledge as an urgent priority,” Anastasiades said.

“This will help towards the immediate reduction of energy consumption costs in households and businesses, but also the implementation of our obligations to achieve climate neutrality,” he added.

Road transport is the third area of investment and has a total budget of €30 million. This includes the completion of the Nicosia ring road project, as well as efforts to reduce traffic congestion through various means.

What is more, €424 million will be allocated to social policies, including “the creation of a fairer society, without exclusions, that puts the support of all those who need the protection of the state at its core”.

“In addition to what has been carried out, there will be new programmes for the greater protection of those who need support from the state,” the president said.

“Investments are planned for boosting employment, training projects for the unemployed and young people, as well as the activation of women in the labour market through tuition subsidies in nursery schools for children up to 4 years of age,” he added, noting that one such programme will be launched in September.

Furthermore, the president said that investments in this area will also include social integration actions in schools, especially for children with an immigrant background.

This will be combined with actions for the social integration of people with disabilities, the creation of new supported living homes, the improvement of the disability assessment system, as well as providing food and material assistance to those who need it.

The final area of investment, with a budget of €182 million, concerns local government reforms.

Funds will be allocated to projects aiming to improve public spaces and the creation of new activity centres and areas, including parks, squares, open-air amphitheatres, and multipurpose buildings.

“As I have already mentioned, the provisions of the Thalia 2021-2027 programme should not be seen in isolation, but as complementary and as part of the broader and targeted vision of the government for the legacy it will leave to the next generations,” the president said.

“This plan also includes other important financial tools, such as the Recovery and Resilience Plan, with total appropriations of €1.2 billion, the common agricultural policy, as well as many other European financial tools, which add up to a total amount of €4.4 billion,” he added.

The president said that the above figures do not take into account investments from the private sector, estimated to exceed €1 billion, nor additional funds allocated in future state budgets.
“The implementation of the Thalia programme alone is expected to add 6 per cent to Cyprus’ GDP by 2029, while 8,500 new, well-paid jobs are projected to be created,” Anastasiades.

“And this does not include the additional and incremental related benefits that will come from the rest of the financial instruments nor the private investments that this will stimulate,” he concluded.

‘UK has made little effort to free men sentenced to death’