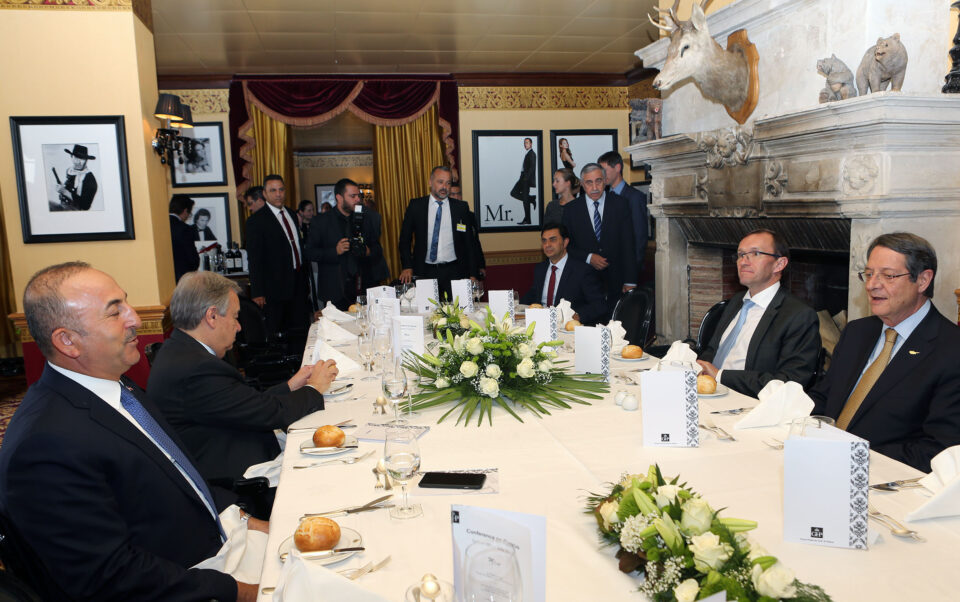 A group of Greek and Turkish Cypriots have just released what they call a comprehensive proposal for a Cyprus settlement, which they intend as ‘food for thought’ for both communities on the island – in tandem with a warning that the current status quo is untenable.

Their proposal, the fruit of six months of labour, has been uploaded to the website (eastmed-thinktank.com) of their just-established brain-trust called ‘The Eastern Mediterranean Think Tank’. The material is available in Greek, Turkish and English.

As they themselves put it, the novelty in their pitch lies in “the great emphasis placed on day-to-day issues that are of concern to ordinary citizens. The underrating (in the past) of this dimension of the political problem of Cyprus has resulted in intensifying the fears of Greek Cypriots as well as of Turkish Cypriots that changing the status quo could lead to negative developments that would seriously impact their daily lives. It is of the utmost importance to find practical ways and means to allay these fears.”

They describe themselves as a “nonpartisan group of Cypriots, who – together with partners and allies – are committed to assist and support the resolution of the ‘Cyprus Problem’…We strive to lead Cyprus into a more peaceful, free, secure and prosperous world, committed to serve the ideals of freedom, political equality, human dignity and mutual respect.”

The group argue that “the reunification of Cyprus (and the political and economic stability that will naturally follow) will pave the road to sustainable economic development and to the promotion of Cyprus as an international business centre.”

It goes without saying they propose a bizonal, bicommunal federation guaranteeing all the fundamental freedoms for citizens.

Relating to elections and governance, in brief the group propose that “the election result is measured by adjusting the counted votes of each pair in each state, so that the counted valid votes of each pair in each state, are limited to the total of the counted valid ballot papers of that pair throughout the territory multiplied by the percentage of the registered voters of that state to the registered voters of the entire territory. It is understood that the number of valid ballot papers counted is not weighted (adjusted) downwards, if it is not greater than the corresponding maximum number determined as described above.”

The think tank’s ‘blueprint’ consists of a condensation of the convergences reached in peace talks in the past as well as suggestions that made by United Nations officials. The proposal is based on what had been agreed between the parties up until the breakdown of the peace process in Crans-Montana some five years ago, and on the framework agreement produced by the UN secretary-general at the time.

Panayiotides, moderator for the group, said their proposal is written in language accessible to the layperson, “rather than the confusing legalese characteristic of settlement proposals and documents”.

Essentially, they want to tell Cypriots what a settlement would entail for their everyday lives.

“This is important because, from feedback we get from people, many don’t even properly understand what the term ‘federation’ means. That’s why we try to simplify things,” Panayiotides tells the Sunday Mail.

To take one example, when it comes to healthcare, their proposal states:

“The permanent residents of the North State deriving income subject to Gesy contributions should be given the option of either being exempted from the obligation to pay the relevant contributions (resulting in the loss of the right to cover their medical needs), or of participating in the Gesy system by paying additional contributions in relation to their income derived from outside the South State (thus having all the rights they would have had, if they were permanent residents of the South State).”

On pensions, the think tank has this to say:

“Both constituent states have their own rules concerning the quantification, conditions of payment and payment procedures of pension benefits. These rules will remain in force but the rules governing the quantification and payment of pensions in those cases where pension rights arise in more than one member state of the European Union should also apply, i.e. the payment of pension rights will be made separately by each of the states in which a pension entitlement has accrued, in accordance with EU Regulations 883/04 and 987/09. It goes without saying that the existing interstate conventions in the field of social security shall be valid and applicable throughout the territory of the Federal Republic of Cyprus. It also goes without saying that a similar agreement should be concluded with Turkey as soon as possible.”

Regarding local residency, the authors suggest that for a transitional period of 10 years “the right of (permanent) establishment of a citizen of the one constituent state in the other constituent state shall be limited to 50 per cent of the permanently established citizens in a given municipality or community.”

Panayiotides stresses that their group lay no claim to infallibility – they’re open to suggestions. And the prelude to their document states: “In reading this paper, you will probably identify points with which you are not in full agreement. Please do not yield to the temptation of focusing on these issues but try to view the proposed arrangements as a whole. Above all, do not fail to consider what is likely to happen, if the problem remains unresolved for the next 60 years.”

Their proposal is directed at everyone – laypeople and politicians. On the latter, Panayiotides tells the Sunday Mail that he’d like the current presidential candidates to read their paper. If and once they’ve done so, he’d pose three questions to them:

“First, do you see something you don’t like, and what is that? Second, why don’t you like such-and-such point? And third, do you have a realistic alternative?”

Panayiotides signs out with an appeal for a sense of urgency: “Time for a viable and fair solution is running out, and we’re fast reaching an inflection point where things might become irreversible.”