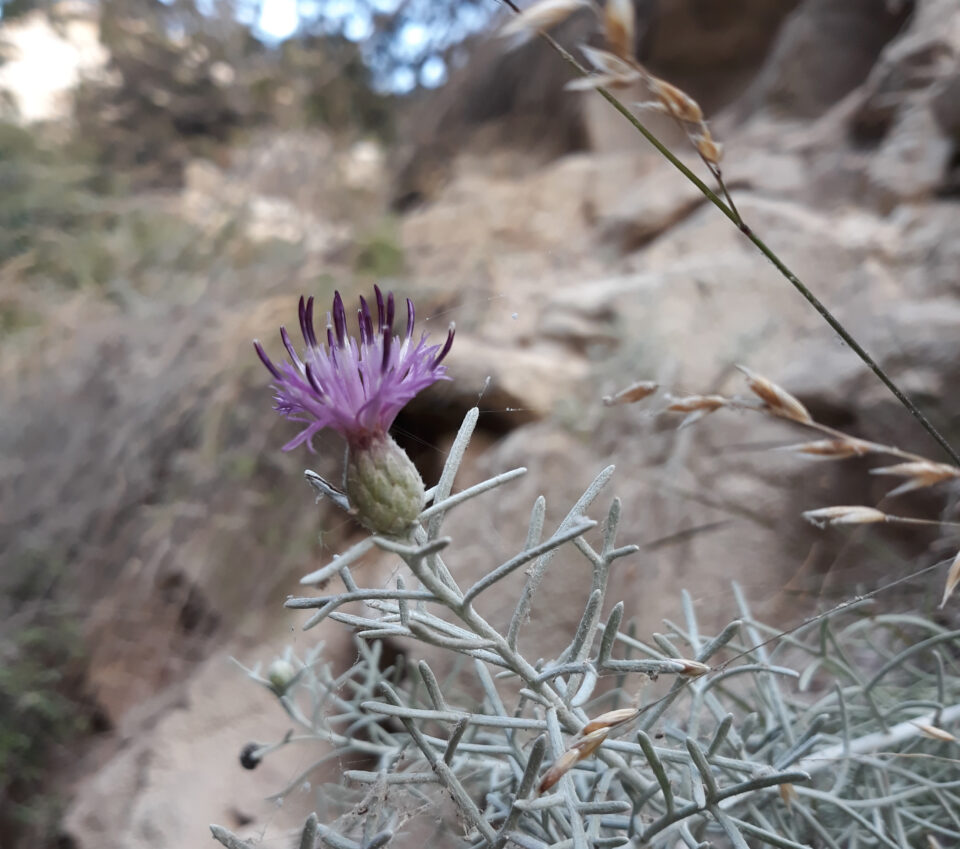 Centaurea akamantis at the Avakas Gorge. The Akamas centaury is critically endangered due to habitat loss

The endemic plants of the island make its flora incredibly unique

Summer, 2018. This was the first time I had the chance to visit Cyprus and fall in love with the unique Cypriot flora.

My attraction to the flora of Cyprus didn’t just start after I landed in Paphos, but already a few months before in the lecture halls of the University of Vienna. As luck would have it, the friendly girl next to me was Cypriot. This was the start of a true friendship as well as the origin of my botanical interest in Cyprus.

I began my career training to become a teacher for secondary schools. Only after finishing these studies, I decided to try to satisfy the hunger I had for biology at a university level and enrolled in a bachelor’s degree in biology at the University of Vienna, followed by a master’s degree in botany. If you plan to come to Vienna, do not miss our beautiful botanical garden next to the Department of Botany and Biodiversity Research.

A few months after making my Cypriot connection – Skevi – in our botany course, I arrived at the airport in Cyprus, where she picked me up. Only a couple of hours later, I found myself sweating under the pitiless sun in front of the entrance to the Avakas Gorge. At this moment, I was in great doubt concerning our decision to take a trip to the gorge instead of cooling down in the Mediterranean Sea.

But, there she was! Centaurea akamantis, the Akamas centaury, was showing us its pink florets from its elevated position on a cliff. Recognising the plant as a species from the genus Centaurea right away, cheered my botanical heart and allowed me to forget my problems of acute transpiration. This trip was indeed an amazing start for my first visit to Cyprus. The Akamas centaury is critically endangered due to habitat loss. Centaurea akamantis is one of the many endemic plants in Cyprus, meaning that this species can only be found here. Endemic plants like this make the flora of Cyprus incredibly unique, but also especially vulnerable to anthropogenic (human-caused) activities. They require specific protective measures.

Coming back to Austria, I was already planning my next journey to Cyprus – this time in February to get a first glimpse of the flowering plants in spring. I have to admit that the escape from the long-lasting cold and dark winter of Vienna was an additional motivation.

The first plant picture on my phone from this trip to Cyprus was taken during a walk around the beautiful archaeological park of Kato Paphos. I captured a plant with conspicuous venation on its leaflets and cream-coloured flowers with purple veins. Again, a species endemic to Cyprus! The veined sainfoin (Onobrychis venosa) turned out to be reliable company during this stay. I found this plant several times during my stay and I could not resist taking a picture of every flowering individual. This resulted in a highly unproportional ratio of Onobrychis venosa images on my mobile.

During my studies, I focused on palynology whenever there was the option. Palynology is the study of pollen grains and spores. For my bachelor’s thesis, I undertook melissopalynological studies of two Greek thyme honeys and compared their specific pollen profile. Another project within the scope of my master’s studies also concentrated on palynology. Using a combination of scientific approaches including light and electron microscopy, I became acquainted with various techniques applied in forensic palynology under the guidance of Martina Weber and her great team. Forensic palynology is a palynological subdiscipline that uses pollen and spores for forensic investigations at crime scenes.

From a flowering plant’s perspective, pollen is essential for sexual reproduction. From a human point of view, studying pollen is not only crucial for our understanding of sexual reproduction in plants. Palynology facilitates studies in the context of human health (allergies), food (studying pollen in honey – melissopalynology), security (forensic palynology), and enables basic research of plant evolution and phylogeny.

Towards the end of my studies, I shifted my focus to molecular plant biology and genetics. Today, I am a PhD candidate in the research group of Liam Dolan at the Gregor Mendel Institute. Uncompromising, I am still dealing with a very tiny model system, namely spores of the liverwort Marchantia polymorpha. In my PhD project, I am investigating the role of light receptors in the establishment of cell polarity.

Throughout, my fascination with the richness of Cypriot vegetation remains unaltered and, with Austria unlikely to become a seaside nation in the foreseeable future, Cyprus will stay a favoured travelling destination for me.

Thanks, Cyprus, see you soon!

Johannes Rötzer is a biologist from Austria and currently working on his PhD project at the Vienna BioCenter. When travelling he tries to get a glimpse of the local flora, which in Cyprus has led to a long-lasting interest in its unique plant life