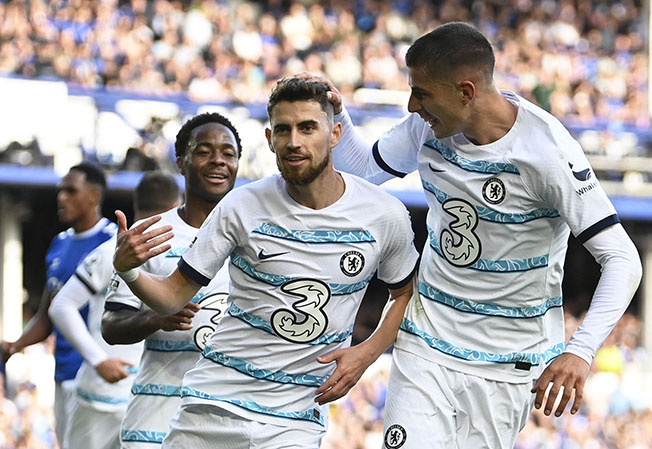 Match-by-match facts and statistics ahead of the second round of Premier League fixtures from Aug. 13-15 (all times GMT).

* Everton have not tasted victory in 16 of their last 17 away matches in the Premier League.

* Everton will be without defender Ben Godfrey for three months following leg surgery but new arrivals Conor Coady and Amadou Onana could feature.

* Arsenal have won their last three Premier League games against Leicester by a difference of two goals.

* Leicester will play their first away game since 2011 without goalkeeper Kasper Schmeichel in the club after the Denmark international left for Nice.

* Leicester are yet to make a signing in the summer transfer window.

* Brighton have not been beaten by Newcastle in their last five home Premier League meetings (W2 D3.

* Following a 2-1 victory in March, Newcastle are looking to secure consecutive league wins over Brighton for the first time since beating them twice in the 2016-17 Championship campaign.

* Manchester City have won all 10 of their Premier League matches against Bournemouth, scoring 30 goals and conceding five while also keeping five clean sheets.

* Bournemouth have only led for eight minutes in their 16 league meetings against Manchester City between 1987 and 2020, with Charlie Daniels giving them the lead in August 2017 before Gabriel Jesus equalised.

* Southampton have lost their last five matches in the Premier League.

* Wolves have lost their first home league match in the last two seasons, losing to Manchester City and Spurs.

* Wolves have won nine of their previous 12 league games against Fulham (D2 L1), winning their last three in a row all by a 1-0 scoreline in the Premier League between May 2019 and April 2021.

* Brentford have not lost their first home game in any of their six previous top-flight campaigns.

* Manchester United, who lost 2-1 at home to Brighton & Hove Albion in their Premier League opener, have not started a season with two consecutive defeats since 1992.

* Since the start of last season, only Liverpool (21) and Tottenham (17) have picked up more points from losing positions in the Premier League than Brentford (16).

* This will be the first meeting between Nottingham Forest and West Ham in any competition since January 2014, when Forest won 5-0 in an FA Cup tie.

* West Ham have won 10 of their past 14 Premier League games against promoted sides.

* Since losing consecutive Premier League games against Tottenham in 2018, Chelsea are unbeaten in seven games against them, conceding only one goal in that run.

* Tottenham have won just one of their previous 37 away matches against Chelsea in all competitions.

* Spurs striker Harry Kane has scored 41 Premier League London derby goals. However, he has failed to score in any of his past five appearances against Chelsea.

* Liverpool have won 10 straight Premier League games against Crystal Palace since losing 2-1 to them in April 2017.

* Palace lost their last five Premier League games in a row at Anfield.