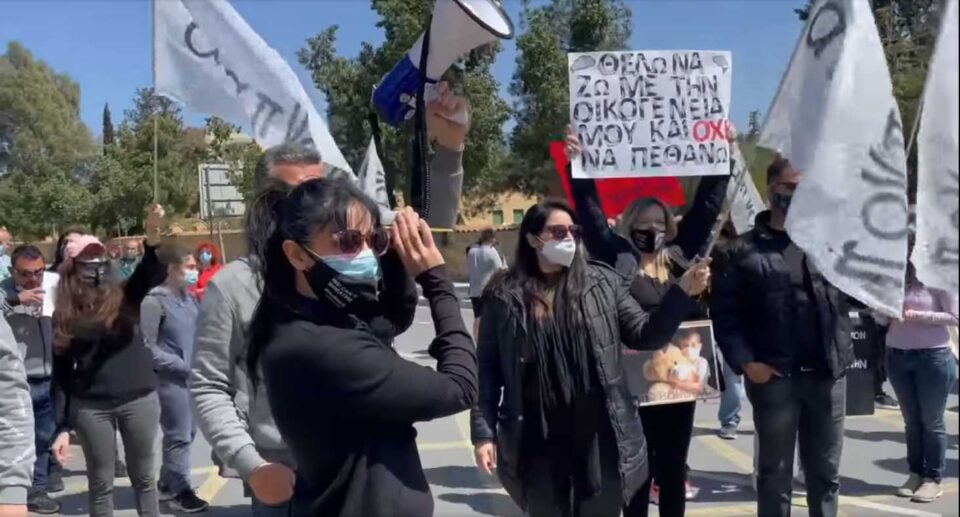 File Photo: Dhali residents outside the Presidential Palace in Nicosia

Dali Municipality said on Thursday that while it was adamant that two asphalt plants in the area need to be relocated elsewhere, in line with a cabinet decision, it does not have a say or where they should go.

Nor should the ongoing row over the proposed new sites generate a new vicious circle of discussions, leaving Dali hostage.

The written statement came in the wake of angry protests by communities in Mitsero and Vasiliko which are objecting to plans for the asphalt plants to go there.

Communities in the vicinity of both alternative sites say their areas already have too many nuisance industries. Both have staged protests, sought recourse through the courts and have lobbied President Nicos Anastasiades insisting he intervene.

Mitsero communities have branded the decision to relocate one of the asphalt plants to their area as ‘political’, prompting authorities to counter that the proper environmental and other criteria have been adhered to.

On Thursday, Dali Municipality weighed into the debate, saying that it has not taken a position on the suitability of the proposed new sites for the asphalt plants.

What it has done was stress the importance of avoiding conditions that created a suffocating atmosphere in the municipality’s parish of Ayion Constantinou and Elenis elsewhere.

It said that it agreed with the need for a strategic plan on such issues, but this should not mean further delays, at the expense of Dali.

“Dali can be used as a launching pad as to the way and methodology that must be followed for such a plan to start and be completed. Specifically, the site (if it is ever found), that will host the asphalt plants must, based on the town planning legislation, concern areas where such plants can be installed,” it said, giving as examples industrial zones A, quarry zones and areas adjoining quarry zones.

Based on these restrictions, the areas that can host such plants are specific, due to the current town planning model.

Some of the areas discussed in the past concern the country’s current and future energy centres. Were the town planning design to be completed today, this is where these units would go and although political circles are aware of this, none state it fearing the political cost, the municipality added.

And while everyone looks for a site, years will pass and Dali residents will continue to inhale dangerous emissions and harmful odours in their homes, it said.

Nor should it be forgotten that ultimately, the solution will be found by among other the environment service and state experts – the same people whose views are currently being challenged.

“Consequently, a vicious circle of a strategic plan leaves Dali residents hostages in their own homes.”