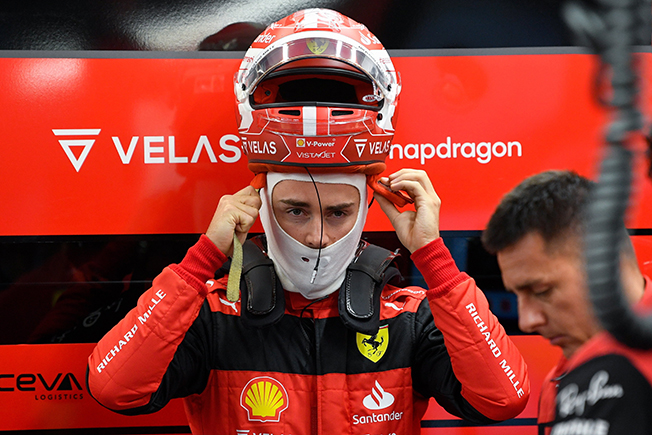 Charles Leclerc, winner in Belgium in 2019, is second in the standings but a massive 80 points behind Red Bull’s reigning champion Max Verstappen with nine races to go

Charles Leclerc will be hoping to revive Ferrari’s spirits when he returns to the scene of his first Formula One victory in Sunday’s Belgian Grand Prix.

The Monegasque, winner at Spa-Francorchamps in 2019, is second overall but a massive 80 points behind Red Bull’s reigning champion Max Verstappen with nine races to go.

If his hopes of becoming Ferrari’s first world champion since Kimi Raikkonen in 2007 appear to be in tatters, Leclerc has a winning car that should suit the high-speed circuit.

He will also need reliability and none of the driver errors or strategic missteps that have cost the team dear, with Leclerc winning only three races to Verstappen’s eight despite starting from pole seven times.

Verstappen has finished every race but one on the podium, making the Dutch driver’s second title look inevitable.

The 24-year-old, winner last year of a procession that lasted three laps behind the safety car in torrential rain, is fired up to chalk up his first proper Belgian victory in front of his orange-clad supporters in the country of his birth.

“I definitely got the itch to get back to it,” said Verstappen.

“It’s my favourite track so I’m looking forward to racing there this weekend.”

The team are on a streak of six straight podium finishes, with both cars in the top three in the last two races, and Russell taking their first pole of the season in Hungary.

“While we’re still not quite in the fight for victories, we’re getting closer, so we need to keep the momentum going and the pressure on,” said team boss Toto Wolff.

The Belgian race marks the sport’s return from its summer break and is the first of three successive weekends that includes the Dutch Grand Prix at Zandvoort and Italy’s Monza.

There will also be plenty of talk about the driver market, with McLaren on Wednesday announcing the departure of Australian Daniel Ricciardo at the end of the season.

The weekend will also see the introduction of a new vertical oscillation metric, setting a limit on how much cars are allowed to bounce or “porpoise”.

Changes have been made to the Spa circuit’s fearsome Eau Rouge corner after a spate of serious accidents in recent years, including a crash that claimed the life of F2 racer Anthoine Hubert in 2019.

Cryptocurrencies taking over the market: Immunicorn, Binance Coin, and Bitcoin

Guest recipes with Farah Shammas: Spice up your summer