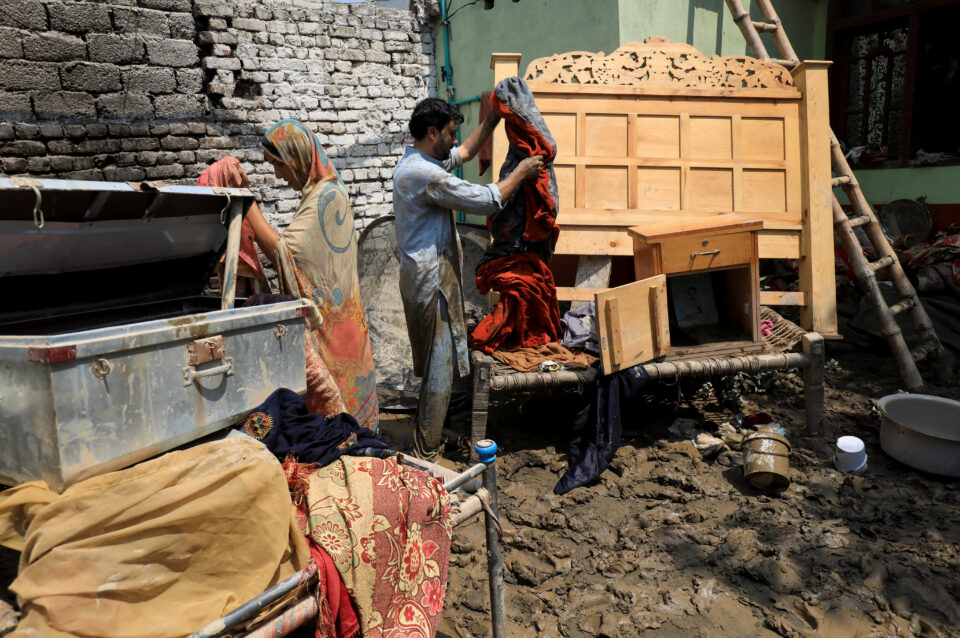 A man and woman go through their belongings to dry them up, following rains and floods during the monsoon season in Charsadda. Photo by Reuters

Early estimates put the damage from Pakistan’s deadly floods at more than $10 billion, its planning minister said on Monday, adding that the world has an obligation to help the South Asian nation cope with the effects of man-made climate change.

“I think it is going to be huge. So far, (a) very early, preliminary estimate is that it is big, it is higher than $10 billion,” Ahsan Iqbal told Reuters in an interview.

“So far we have lost 1,000 human lives. There is damage to almost nearly one million houses,” Iqbal said at his office.

The minister said it might take five years to rebuild and rehabilitate the nation of 200 million people, while in the near term it will be confronted with acute food shortages.

The two neighbouring countries have not had any trade for a long time.

Food prices have already shot up due to flooded crops and impassable roads.

India Prime Minister Narendra Modi said he was saddened to the devastation caused by the floods.

“We extend our heartfelt condolences to the families of the victims, the injured and all those affected by this natural calamity and hope for an early restoration of normalcy,” he said in a tweet.

Pakistan has already appealed for international help and some countries have already sent in supplies and rescue teams.

The nation’s foreign minister told Reuters on Sunday he hoped financial institutions such as the International Monetary Fund would provide financial aid, taking the economic cost of the floods into account.

However, Iqbal said any formal requests for financial help would need to wait until the scale of the damage was known, something Pakistan was now evaluating with partners, including the World Bank and Asian Development Bank.

He also said the world owed Pakistan, which was a victim of climate change caused by “irresponsible development of the developed world.”

“Our carbon footprint is lowest in the world,” he said. “The international community has a responsibility to help us, upgrade our infrastructure, to make our infrastructure more climate resilient, so that we don’t have such losses every three, four, five years.”

Iqbal said 45% of cotton crops had been washed away with early wheat sowing in southern Pakistan also affected, as large swaths of land remained inundated with flood water, and severe damage to rice fields as well as vegetable and fruit crops.

Southern Sindh and southwestern Balochistan provinces have been hit the hardest by the floods that swept through farmland and towns, with large parts of both and northern Pakistan districts cut off for many days from the rest of the country.