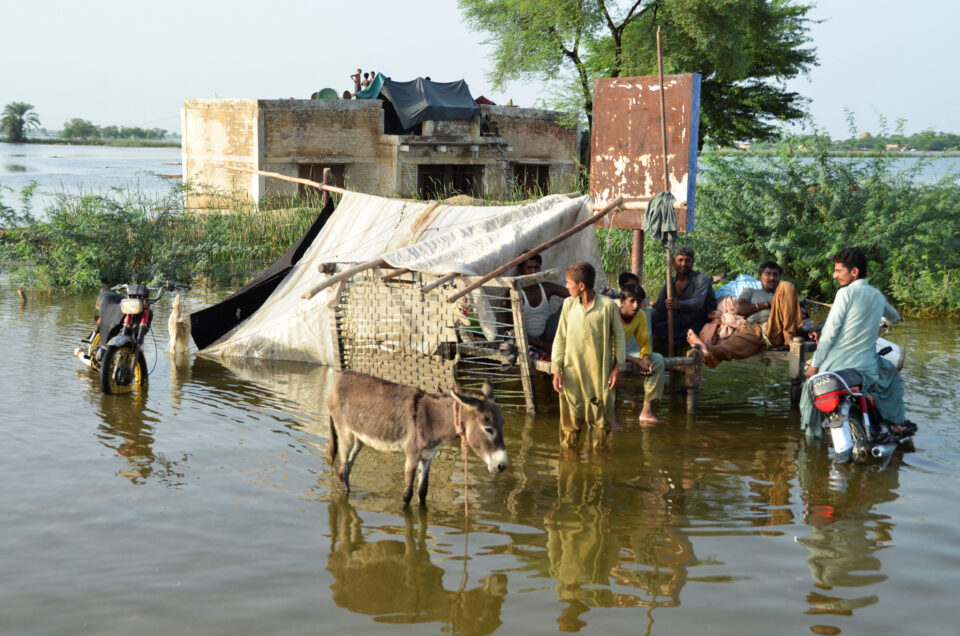 Flooded house, following rains and floods during the monsoon season in Suhbatpur, Pakistan August 28, 2022. REUTERS/Amer Hussain NO RESALES. NO ARCHIVES.

Pakistan needs financial help to deal with “overwhelming” floods, its foreign minister said, adding that he hoped financial institutions such as the International Monetary Fund would take the economic fallout into account.

Unusually heavy monsoon rains have caused devastating floods in both the north and south of the country, affecting more than 30 million people and killing more than 1,000. Read full story

“I haven’t seen destruction of this scale, I find it very difficult to put into words … it is overwhelming,” said Pakistan’s Foreign Minister Bilawal Bhutto-Zardari in an interview with Reuters, adding many crops that provided much of the population’s livelihoods had been wiped out.

“Obviously this will have an effect on the overall economic situation,” he said.

The South Asian nation was already in an economic crisis, facing high inflation, a depreciating currency and a current account deficit.

The IMF board will decide this week on whether to release $1.2 billion as part of the seventh and eighth tranches of Pakistan’s bailout programme, which it entered in 2019.

Bhutto-Zardari said the board was expected to approve the release given an agreement between Pakistani officials and IMF staff had already been reached and he hoped in coming months the IMF would recognise the impact of the floods.

“Going forward, I would expect not only the IMF, but the international community and international agencies to truly grasp the level of devastation,” he said.

Bhutto-Zardari, the son of assassinated former Prime Minister Benazir Bhutto, said the economic impact was still being assessed, but that some estimates had put it at $4 billion. Given the impact on infrastructure and people’s livelihoods, he said he expected the total figure would be much higher.

Pakistan’s central bank had already flagged the record monsoon rainfall as a threat to economic output given its impact on agriculture.

Pakistan would this week launch an appeal asking United Nations member states to contribute to relief efforts, Bhutto-Zardari said, and the country needed to look at how it would handle the longer term impacts of climate change.

“In the next phase, when we look towards rehabilitation and reconstruction, we will have conversations not only with the IMF, but with the World Bank, the Asian Development Bank,” Bhutto-Zardari said.

Bhutto-Zardari said after relief efforts, the country would have to look at how to develop infrastructure that was more resistant to both floods and droughts and address the huge changes faced by the agriculture sector.

“Despite the fact that Pakistan contributes negligible amounts to the overall carbon footprint … we are devastated by climate disasters such as these time and time again, and we have to adapt within our limited resources, however we can, to live in this new environment,” he said.

ECB policymakers make the case for a big rate hike