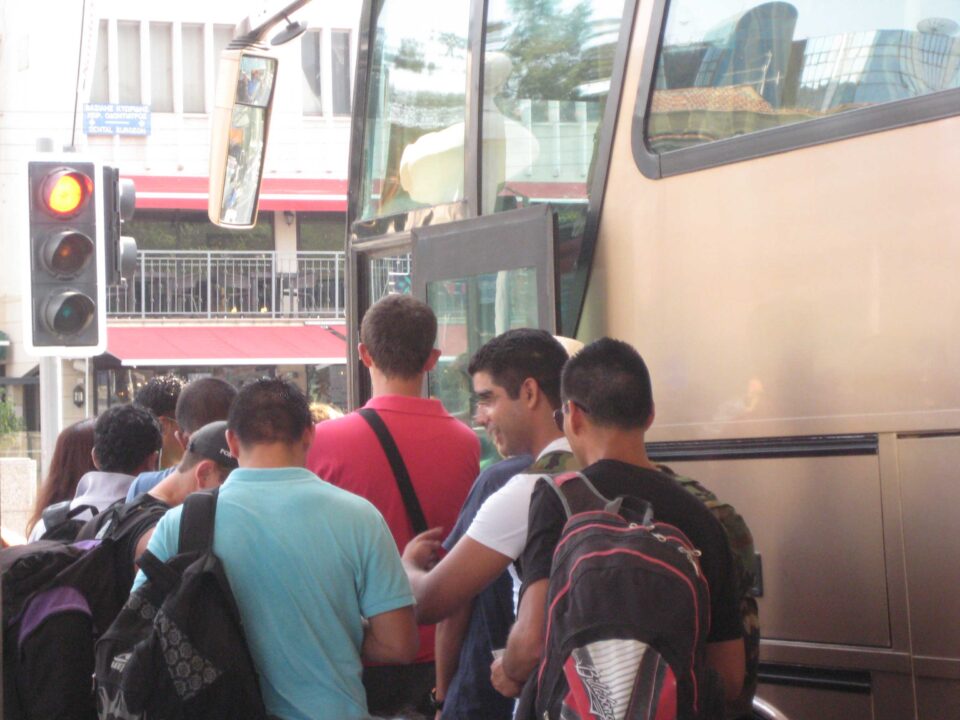 The Ayia Napa bus to and from Nicosia

The situation with early-morning buses in Ayia Napa has become increasingly lawless and unbearable – though the end of summer will presumably help.

B, a young Bulgarian woman (she didn’t want her name to be used), works as a barmaid in Napa. Around 6am she takes – or tries to take – the Intercity bus home to Nicosia, waiting at the Monastery stop opposite the central square.

On August 14, a Sunday, she tried and failed to get on three buses. At 9.17am, having been waiting for three hours after a full night’s work, she emailed the Cyprus Mail to inform the paper of her plight.

This was by no means a one-off, she told us later. It’s been happening “the whole of the summer, almost. And every weekend, Saturday and Sunday, there were fights. It was crazy, this summer”.

The problem isn’t just that the buses are full (though they are). It’s also the constant violence and unpleasantness among the waiting crowd, many of them drunk and disorderly.

“There are fist fights… It’s chaos,” confirmed a worker at a nearby business, who’s witnessed the trouble first-hand. Apparently it tends to build while people are waiting for the bus – then flares up into violence when it arrives and everyone pushes and shoves to get in.

“If you’re a female, trust me, you can’t enter,” says B. “There is no possibility to enter this bus.”

Women like B are caught in a bit of a Catch-22. If she were first in line, she’d presumably be able to squeeze her way in – but that would mean waiting for an hour in a throng of aggressive, pushy men. “What I do now is stand on the opposite side of the road, and I’m just waiting,” she admits. “Because the crowd is a lot. It’s 200 people together waiting for Nicosia, for Larnaca.

“When the bus approaches I usually go slowly-slowly and cross the road – but in most cases there is no chance to enter. Because they’re literally fighting.”

It’s exhausting for workers like her, who just want to go home and sleep. “And it’s also [bad] for the tourists,” she adds. “Because what I’ve noticed – every time with my colleague, when we’re waiting for our bus, you know, for hours – we have seen how unpleasant the experience was for all the tourists. They also witnessed a lot of fights – a lot! They were just standing there, wondering what is happening.” She shakes her head disapprovingly: “Like barbarians, fighting. Wild people fighting”.

Drunken tourists are everyone’s favourite culprit for whatever goes wrong in Napa – yet the neighbourhood witness doesn’t think tourists are mostly to blame in this case. Instead, he told the Cyprus Mail, it seems to be people who’ve been working all night (like B.) and are desperate to get home – though many are undoubtedly intoxicated as well.

What can be done to solve the problem? Even little things might help – like, for instance, having separate Intercity stops for Nicosia and Larnaca, which would cut the crowd in half. But the two most obvious solutions are to have a police (or security guard) presence at the bus stop, and/or to run extra buses in the early-morning hours.

The second of those may be feasible. Fotios Kaoullas, general manager of Intercity Buses, confirmed that his company will sometimes add an extra bus if demand is there. On Monday mornings in summer, for instance, when weekending youths head back to Nicosia, “there are four buses at 6am, not just one, plus a fifth bus for workers” so they won’t get disturbed by the noisy kids.

In that case, however, there’s a clear public interest in not letting drunken youngsters on the roads. This one is less clear-cut – especially since someone like B. probably could find space on the first or second bus, it’s just that she can’t wait in line because of all the trouble.

“I do sympathise with the lady,” says Kaoullas. Having said that, pushing and jostling when a bus arrives is a fact of life. “It’s impossible – for me, anyway – to promise to eliminate the pushing problem in Cyprus. Fights, that’s a different matter. That’s a police matter.”

Looking through the Intercity archive, Kaoullas finds no record of any incident having been reported in Ayia Napa on August 14 – though of course it would only have been reported if the driver reported it, and the driver may not have thought it necessary to report a fight that occurred in the street, not on the bus itself.

Then again, without an incident report, the company has no way of knowing that a problem exists, or to consider adding extra buses.

Kaoullas suggests that B. should’ve called Intercity (what’s known as a “stress call”) on their free number, 8000-7789. Had she done so, he says, “someone would’ve contacted the driver and told him ‘There’s a woman in distress, she’s been waiting for three hours’.”

B. herself, however, is more cynical when the solution is suggested. “I know very well what they will say,” she replies. “I have a lot of experience.”

In the end, the overcrowded buses in Napa are emblematic of a more general rise in lawlessness, and cases falling through increasingly visible cracks.

The people most affected by the early-morning congestion are largely third-country nationals, a demographic that’s notoriously neglected in Cyprus. The police are already stretched too thin to take notice. The bus company argue – with some justification – that their drivers have their hands full trying to keep order on the bus itself, and can’t be expected to double as cops anyway. Security guards might solve the problem – or perhaps they’d make things worse, and besides who’s going to pay for them?

Meanwhile, B. is more or less resigned to ending her working night with a fraught few hours of exhaustion and mayhem – at least till the end of the season, when Napa winds down anyway. Still, she’s cautiously receptive to the solution offered by Intercity.

“Next time when I have this problem, I’m going to call this company and record it. And let’s see what will happen.”

Yet another opportunity that should not be wasted