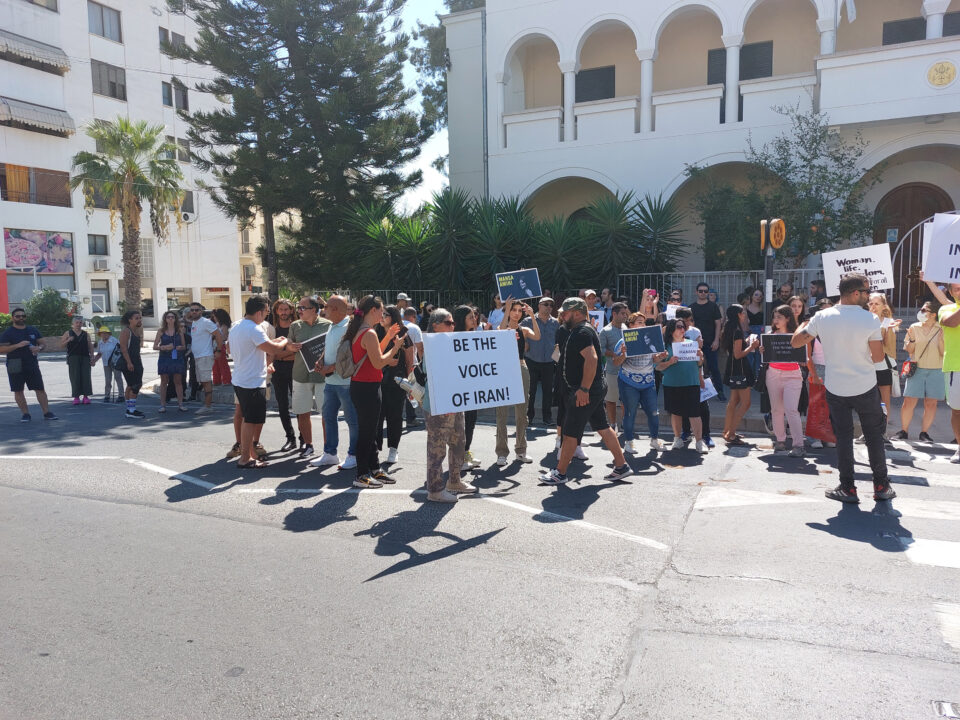 Dozens of Greek Cypriots protested in front of the Iranian embassy in Nicosia on Sunday in support of the struggle for freedom in Iran and the protests that have been taking place there following the death of Mahsa Amini,

At least 41 people have been killed in the week-long unrest, state television said on Saturday. It said that toll was based on its own count and official figures were yet to be released. Protests have erupted in most of the country’s 31 provinces.

The protests broke out in northwestern Iran a week ago at the funeral of Mahsa Amini, a 22-year-old Kurdish woman who died after falling into a coma following her detention in Tehran by morality police enforcing hijab rules on women’s dress.

Her death has reignited anger over issues including restrictions on personal freedoms in Iran, the strict dress codes for women, and an economy reeling from sanctions.

Carrying placards and signs with slogans in Iranian, English and Greek and photographs of Mahsha Amini, the protesters chanted slogans such as “Be the voice of Iran”, “Freedom in Iran”, “Help the women of Iran”,

“Down with the patriarchy ” and “There is no internet in Iran”.

The “Women of Cyprus” community, which organised the protest, told CNA that the event was about everything that is happening in Iran.

For seven or eights days, they said, people have been in the streets protesting against the killing of Mahsha Amini, “who has now become a symbol because in Iran people are oppressed, women have no rights, they are beaten, they are killed because of Islamic regime that exists there”.

In the north of the island, the woman’s branch of the Republican Turkish Party issued a statement saying: “We stand next to our sisters in Iran, in their struggle for freedom”.

“In the system where patriarchy is hand in hand with religious conservatism, women’s bodies are treated as an object to be controlled as if they do not belong to them but to the state and its dominant male mentality,” the statement said.

“This dark mentality, which it ignores the most basic human rights of women, it is not only shaped by interference with dress, it acts as a fascist form of power that dominates people’s lifestyles. Those who oppose this bigotry and oppressive policies are also considered ‘immoral infidels’ and punished and killed by torture.”