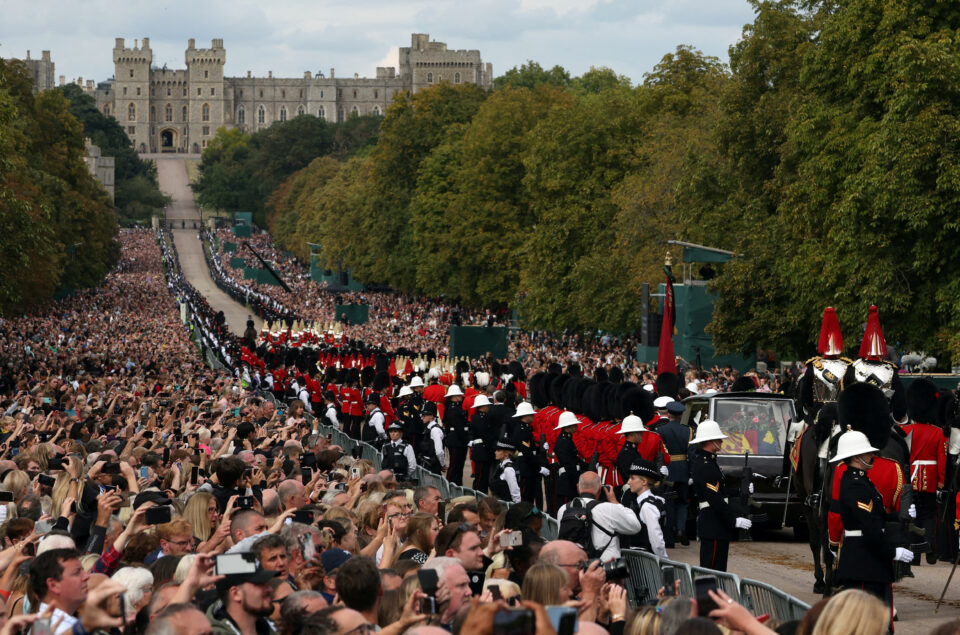 On Friday, September 16 2022, the day the queue to see Queen Elizabeth II lying in state in Westminster Hall first reached its ten-mile capacity and had to be closed to new entrants, one social media commentator tweeted that it was “our 21st-century pilgrimage”.

The idea that these crowds of mourners waiting through the night to view the Queen’s coffin were pilgrims was subsequently promoted by the press. It was also enthusiastically taken up by the public.

“We were coming slowly down the Mall and, because you’re with thousands of others all making the same journey, it almost felt like a pilgrimage,” an IT engineer told the Independent. Even the Bishop of Southwark agreed, which is remarkable given that, until relatively recently, pilgrimage in Protestant Britain was considered a Catholic aberration.

I have spent 20 years researching contemporary and secular pilgrimage phenomena and participating in many pilgrimages. Three aspects of the queue chime with my research: the sense of camaraderie felt by participants, the valorisation of physical hardship, and the idea that the journey is just as important as the destination.

Why people waited in line

To understand how so many Britons came to perceive what was ostensibly a mourning event in this way, I joined the queue on September 15 2022. I also spent four days analysing newspaper and social media comments.

For many participants, the queue’s most noteworthy feature was the sense of camaraderie it inspired. It brought together, according to one journalist, “people of all ages, backgrounds and places across the land”.

Pilgrimage scholars know this phenomenon as “communitas”. Coined by the anthropologist Victor Turner in his 1969 book, The Ritual Process, this term describes the egalitarian fellowship people walking a route together feel.

It was in this spirit that David Beckham and other celebrities were lauded for putting aside their celebrity status and joining the common crowd. Conversely, two television presenters were vilified when they appeared to be flouting the unspoken rule of communitas by jumping the queue. Such was the public outrage that a petition was started to axe their jobs.

Another celebrity, the broadcaster and academic Alice Roberts, also provoked a social media backlash by suggesting that the long wait might be avoided with tickets and timed slots. The response was unanimous and reflected a commonly held belief about pilgrimage: that physical discomfort was an important element of the experience. As one person tweeted,

This was a typical comment. People on social media compared the experience to other well-known pilgrimages: the Irish Catholic route at Lough Derg, or Croagh Patrick, which require penitential practices such as barefoot walking and all-night vigil; the Camino de Santiago in Spain, renowned for its arduous, footsore walk. Other comparisons were made to the medieval pilgrimage of Chaucer’s Canterbury Tales.

For many, it was the protracted nature of the queue which turned it into a pilgrimage. It was not about the destination as much as it was, as one person put it on Twitter, about “the journey filled with hardships, sacrifices and time for contemplation. ‘The Queue’ is an important part of the homage and short cuts do not show the proper flagellation of a committed mourner!”

Resemblances to traditional pilgrimage are of course wide of the mark. The shared suffering and physical hardship experienced were only the result of the time it took an estimated 250,000 people to walk the relatively short distance to Westminster by way of the strict security to be expected for a royal vigil in the Houses of Parliament. It was the inevitable consequence of a logistical challenge, not an intentional penitential practice.

No one expected miracles or inner transformations to occur. And, although the desire to give thanks was a strong motivating factor, gratitude was directed not to a saint with access to heaven but to an earthly monarch in return for her 70 years of service. It was, as the Times leader put it, “a long line of gratitude”.

Some scholars, however, have attempted to explain the ritualised responses to the Queen’s death as a product of Britain’s latent spirituality. This resonates with the rise, in today’s rapidly secularising society, of a new kind of pilgrimage. The Camino has become a model here, with people walking it for spiritual, as distinct from religious reasons. On the Camino, the journey is valued over the destination. Undertaking it is seen as a rewarding physical challenge. One that is ideally experienced on foot.

Other recently rejuvenated routes include the Via Francigena, which runs from Canterbury to Rome, and the Walsingham Way in Norfolk. The rise in popularity of these new pilgrimages has prompted the idea that we are living in a post-secular age with many people searching for meaning through alternatives to institutional religion.

The queue to file past Queen Elizabeth’s coffin is not a new phenomenon. In 1952 the public reacted in a similar way to the death of George VI.

Today, the revival of the ancient descriptor “pilgrim” – and a British public ready to describe themselves as such – can help us better understand this deeply felt moment in history and shared human experience.