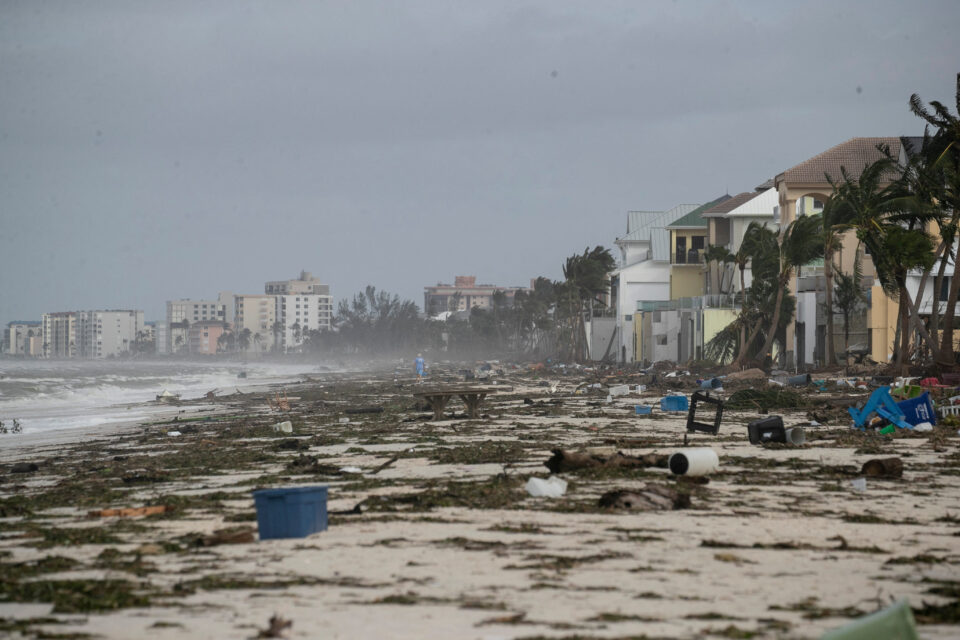 Emergency crews took to helicopters and boats on Thursday to rescue residents of Florida’s Gulf Coast stranded by floodwaters, downed power lines and piles of debris left behind by Hurricane Ian’s destructive march across the state.

One of the mightiest storms to hit the U.S. mainland in recent years, Ian flooded Gulf Coast communities before plowing across the peninsula to the Atlantic seaboard. Local power companies said more than 2.6 million homes and businesses in Florida remained without power.

Governor Ron DeSantis said that Lee and Charlotte counties, home to more than 900,000 people, were “basically off the grid.”

Ian blasted ashore at the barrier island of Cayo Costa on Wednesday afternoon as a Category 4 hurricane with maximum sustained winds of 150 miles per hour (241 km per hour). After weakening to a tropical storm, Ian was expected to strengthen and make landfall as a hurricane in South Carolina on Friday.

“Sanibel Island is destruction … it got hit with really biblical storm surge. It washed away roads. It washed away structures,” DeSantis said during a news briefing as he described the widespread damage throughout the vacation destination made up of beaches, resorts and restaurants.

DeSantis said earlier that 28 helicopters were performing water rescues and that the bridge to island was severely damaged and impassible.

“There have been a number of people identified and brought off the island safely and those efforts are ongoing,” he said.

There were two unconfirmed storm-related fatalities, DeSantis said. The extent of deaths and injuries was unclear on Thursday as rescue workers were only starting to respond to calls after not being able to go out during the treacherous conditions.

A 72-year-old man in Deltona in central Florida died overnight after he went outside during the storm to drain his pool, the Volusia County sheriff said in a statement.

By midday on Thursday, residents in hard-hit areas like Venice, located in Sarasota County about 75 miles (120 km) south of Tampa, hunted for family and friends while rescue crews worked to reach people trapped in flooded homes.

Kurt Hoffman, sheriff of Sarasota County, told residents in a Twitter post that there were more than 500 calls for help.

“Sit tight, we know many of you need help,” Hoffman wrote.

The search for loved ones was made more difficult as cellphone services were often cut.

“A lot of down trees, a lot of flooding everywhere. We are trying to get a hold of my daughter,” said Terri Byrd in a vehicle in a Walmart parking lot trying to get cell service after spending the night at an elementary school in Venice.

Across the region, officials and residents spent the morning assessing the damage.

In Punta Gorda, a town directly in the hurricane’s path, trees, debris and power lines covered roadways, though many buildings remained standing, having withstood the storm’s onslaught better than many had feared.

“It was insane,” local landscaper Jeffrey Chambers, 53, said, noting the storm brought sideways rains and white out conditions. “I was like ‘Please stop already, just stop.’ And it kept going and going.”

In the Orlando area, some 170 miles northeast from where Ian made landfall, emergency workers waded through waist-deep water carrying residents and pets to dry land, video clips on Twitter showed.

Ian, now a tropical storm, slackened as it trekked across Florida but was still producing strong winds, heavy rains and storm surge, including in Georgia, South Carolina and North Carolina, the U.S. National Hurricane Center said.

German automaker Mercedes Benz MBGn.DE, U.S. planemaker Boeing Co BA.N, and the seaports that support manufacturers will suspend operations in South Carolina on Friday due to the potential impact of Ian.

The storm, packing maximum sustained winds of 65 mph (100 kph), was about 25 miles (40 km) northeast of Cape Canaveral, the Miami-based forecaster said. It was expected to reach the Atlantic Coast on Thursday afternoon, unleashing drenching rains and threatening to bring more extensive flooding. Up to 30 inches (76 cm) of rain was forecast to fall on parts of central Florida, the hurricane center said.

President Joe Biden spoke to DeSantis on Thursday, saying his administration was committed to continue close coordination and that Federal Emergency Management Agency Director Deanne Criswell will be in Florida on Friday. Biden said that he will travel to the state when conditions allow.