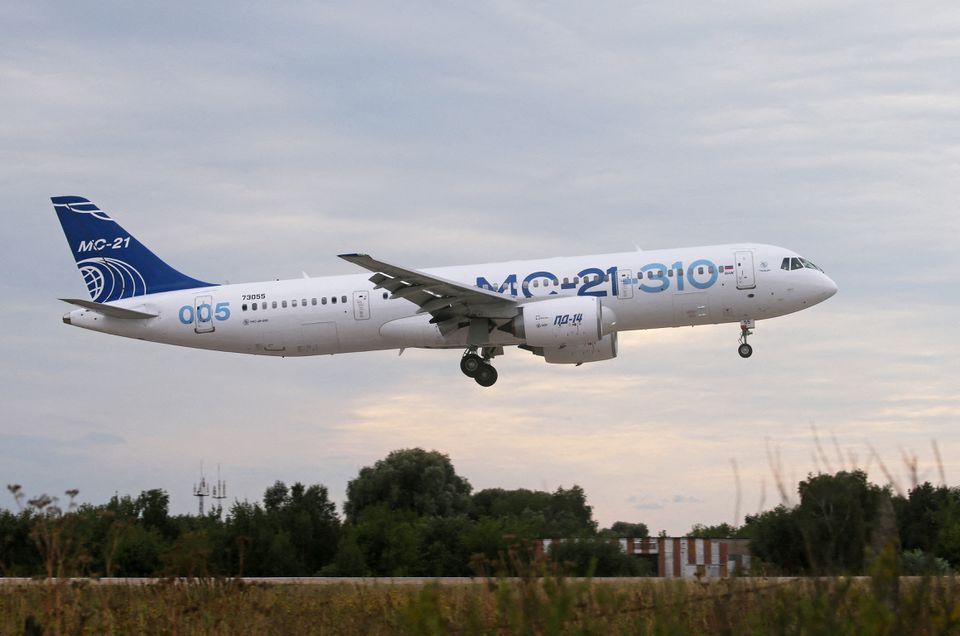 Russia’s aviation industry will aim to go it alone without the West, using locally built parts to produce 1,000 airliners by 2030 and end a reliance on Boeing (BA.N) and Airbus (AIR.PA), state-owned engineer Rostec said.

The remarks from Rostec, a vast state corporation headed by a close ally of President Vladimir Putin that includes Russia’s only manufacturer of civil aircraft, are the strongest indication yet that the country’s aviation sector sees the confrontation with the West as a permanent schism.

The West’s imposition of the most severe sanctions in modern history after Moscow sent thousands of troops into Ukraine has forced the biggest change on Russia’s economy since the Soviet Union crumbled from 1989 to 1991.

The post-Soviet assumptions of the aviation sector have been turned on their head: foreign aircraft, mainly from Boeing and Airbus, account for 95 per cent of passenger traffic, but sanctions mean there are no spare parts – and no prospect of any.

Reuters reported in August that Russian airlines, including state controlled Aeroflot (AFLT.MM), were stripping jetliners to secure spare parts they can no longer buy abroad because of Western sanctions.

But Rostec, headed by Sergei Chemezov who worked with Putin in East Germany in the 1980s, sees the upheaval as an opportunity to build a strong, self-reliant aviation industry.

“Foreign aircraft will drop out of the fleet,” Rostec said in a written response to Reuters questions about its plans and the situation in Russia’s aviation industry.

“We believe that this process is irreversible and Boeing and Airbus planes will never be delivered to Russia,” it said.

Rostec has run some of Russia’s prime industrial, defence and engineering assets since Putin signed a decree creating the corporation in 2007.

Russian airlines, including Aeroflot, splurged on Boeing and Airbus aircraft as they sought to rebuild their fleets after the chaos of the 1990s. Forging a competitive domestic alternative will be difficult.

The target of building 1,000 airliners by 2030 is “basically impossible”, according to aerospace analyst Richard Aboulafia, managing director of US-based AeroDynamic Advisory.

“Even when they could get semiconductors and other vital components from the West, they were having a very hard time producing more than a handful of jets,” he said.

By comparison with the new seven-year goal, Russia and the rest of the Soviet Union had only ever built a combined total of around 2,000 large commercial jetliners, he added.

When it comes to modern jets, Russia’s only civilian planemaker, Rostec’s United Aircraft Corporation (UAC) (UNAC.MM), is limited by a lack of models, manufacturing capacity and foreign components.

Half of components and technologies used in the Russian aircraft industry in 2021 originated from foreign countries, according to a document titled: “On the Strategic Directions of Activity in the New Conditions for the Period up to 2030” prepared by the government and seen by Reuters.

Rostec will have to find parts – or make them.

“Our next goal is, in the shortest time, to complete import substitution of those imported parts which were delivered from abroad, for promising aviation projects – SSJ-New and MS-21,” Rostec said.

Russia plans to produce 20 fully import-substituted regional jets known as Superjet-New annually from 2024 and 72 new medium-haul MS-21 from 2029, beginning with six in 2024, according to the Russian aviation industry’s development plan to 2030, published by the government in June.

Russia is testing its new MS-21 plane with a domestically made PD-14 engine instead of the American-made PW1400G, supplied by Pratt & Whitney (RRX.N).

The MS-21 has been Russia’s attempt to break into the main part of the jet market dominated by Airbus and Boeing.

But it is struggling to replace the foreign components of its Superjet, including the SaM-146 engine which was designed by a joint venture with French engine firm Safran (SAF.PA) and could no longer be produced because of sanctions.

UAC continues to produce Superjets with SaM-146’s from stock and is going to deliver about 20 more jets with this engine, Rostec said.

“They will be the last ones where our partner solutions with Safran are used. Then we will install PD-8 engines on this type of aircraft,” Rostec said. PD-8 engines are also made in Russia.

“From this year, we don’t rely on international cooperation with Western countries,” Rostec said. “We can say with confidence that the MS-21 with American-made engines will not be delivered to the Russian market.”

“We don’t expect sanctions to be eased and we are building our plans based on the existing tough scenario,” Rostec said.