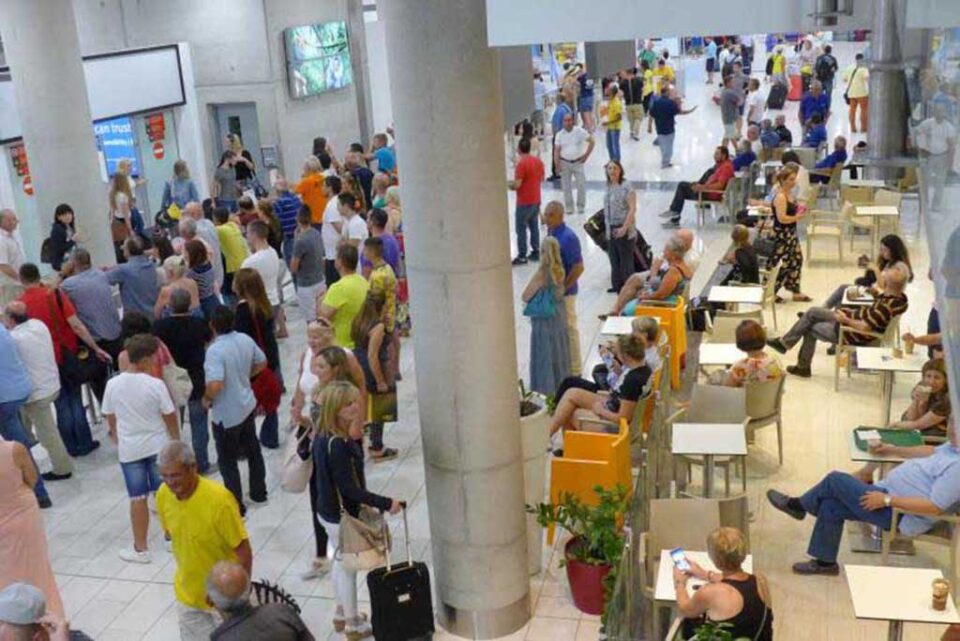 The government is unlikely to maintain the suspension of negotiations with Hermes Airports over airline incentives and extension of the airports for very long, a top official at the finance ministry told the Sunday Mail.

The ministries of finance and transport caused uproar in the tourism sector on Tuesday when they issued a joint statement announcing they “have no other choice but to terminate any negotiations with airports’ operator Hermes” regarding reaching a compromise for the construction of Phase 2 at Larnaca and Paphos airports, and to suspend the implementation of air travel incentives for the period 2022-2030.

“I expect there will be consultations next week about resuming the negotiations,” the finance ministry official said, conceding that the reaction of the ministers of finance and transport to accusations levelled against them at a House finance committee on Monday may have been “extreme”.

The prospect of there being no incentive schemes for airlines in 2023 rang alarm bells in the tourism sector. “The cost, in the event of the suspension of the scheme would be great for the Republic while plans for next year would be in limbo,” said the manager of the Hoteliers Association (Pasyxe) Philokypros Rousounides.

The Chamber of Commerce and Industry issued a statement warning of the “huge negative consequences for the economy, businesses and citizens as a result of this needless and catastrophic confrontation.”

Everyone needed to “consider what is at stake and work consensually, with the wider interest in mind,” added the Association of Cyprus Travel Agents.

There is no doubt that the incentive scheme for airlines has been of vital importance to Cyprus’ connectivity and the increase in tourist arrivals. Between its introduction in 2012 and 2019 passenger traffic increased by 65 per cent, from 6.9 million to 11.3 million passengers, In the same period an additional 110 routes were added. The biggest beneficiaries of the incentives scheme are the airlines that carry the most passengers to Cyprus, the maximum being €28 per passenger. Hermes contributes 60 per cent and the state 40, which is similar to the split of the airports’ gross revenue.

While everyone would like to see this row between the audit service and the government put to rest so the negotiations on the incentive schemes could resume, Auditor general Odysseas Michaelides seems intent on keeping it going.

The finance ministry official said the two ministers were more than justified to take offence at the insinuations of dishonesty and law-breaking made against them by Michaelides at the committee and by his the audit office spokesman after the meeting, said the ministry official. What was said tarnished their reputations, undermined institutions of the state and officials, he added.

At the committee meeting, Michaelides urged the deputies not to approve the extension of the contract for Hermes’ operation of the airports for another five-and-a-half years, something that was currently under negotiation, because the operator had already violated the terms of its contract, signed in 2006 for a 25-year period.

Under the terms of the contract, Michaelides said, Hermes should have started work on Phase 2, the extension of the airports, in May 2022 and should not have demanded extending its contract to 2036 to fulfil the obligation contained in the original contract. The failure to start work in May allowed the government to end the contract now and award the airports to another operator, argued Michaelides.

Things were not as clear-cut as the auditor-general said. As the ministries explained in Tuesday’s statement, the Republic had initiated an arbitration procedure in February 2021 either to oblige Hermes to undertake Phase 2 or to compensate the Republic for failing to do so. The procedure was suspended, as the two sides explored the possibility of a compromise, whereby an extension of the contract would be given so that Hermes could secure funding for Phase 2 and in exchange it would give up a series claims it has against the Republic for lost revenue during the pandemic, among other things.

No agreement had been reached, said the ministries, although Michaelides insisted on a radio show on Thursday there was a preliminary agreement between the two sides.

Before going ahead with such an agreement, the announcement said, the government needed to calculate whether the value of the claims Hermes would waive would be equivalent to the value of the extension of the contract. For this exercise a consultancy firm had to be hired and the government reached an agreement with a company without there being a budget provision for the €200,000 this would cost.

The audit service declared this “clearly unlawful” as the government had not sought tenders. This prompted deputies of all parties to accuse the government of breaking the law, but the accusations did not stop there.

Michaelides also told deputies that the audit service’s report about the ministry of transport had been given to Transport Minister Yiannis Karousos and the ministry’s premanent secretary several days before it was due for publication. In it he stated that the demands of Hermes with regard to the incentive schemes for airlines were unreasonable, and was surprised that he had been contacted by a Hermes executive to discuss this before the report had been made public.

Apart from breaking the law, the ministers were also leaking information to a private firm, according to Michaelides.

Karousos was incensed with the suggestion he or his second in command had leaked the report to Hermes and with Michaelides’ insinuation that he was looking after the interests of Hermes rather than those of the state. Stung by the slur on his character, Karousos insisted that all negotiations with Hermes were suspended, because of the “toxic climate” created.

On Thursday Michaelides appeared on a radio show insisting the state could not proceed to a preliminary agreement with a private company on the extension of the contract (there is no preliminary agreement) and declared that state officials could not promote the arguments of a private company (for the extensions of the contract.)

Rousounides, said that while the audit service was entitled to carry out checks on the state, there was a fine line between checks of procedures and slandering officials. Michaelides was insinuating that the minister of transport and the minister of finance were dishonest officials, which was totally unacceptable, he said.

“He needs to exercise some restraint, because his behaviour could deal a big blow to the economy, when we are facing very challenging times.”

His allegations are aimed at creating the wrong impressions, said the finance ministry source.

He said: “The partnership with Hermes has served the Republic well, but such partnerships are complex, often raising disagreements and disputes along the way. These can only be solved through tough and complicated negotiations, in which both sides eventually have to compromise.”

The priority now is the resumption of the negotiations, especially with regard to the airline incentive schemes, but when and how it will happen is unclear.

Speaking to journalists on Friday, Finance Minister Constantinos Petrides said whatever would be done will be done in consultation with the president, before expressing his displeasure at “being slandered and presented as corrupt before parliament.”

“We can’t have such shows in parliament just for the purposes of petty political exploitation, aimed at smearing and stigmatising people with incorrect and unsubstantiated claims,” Petrides said.