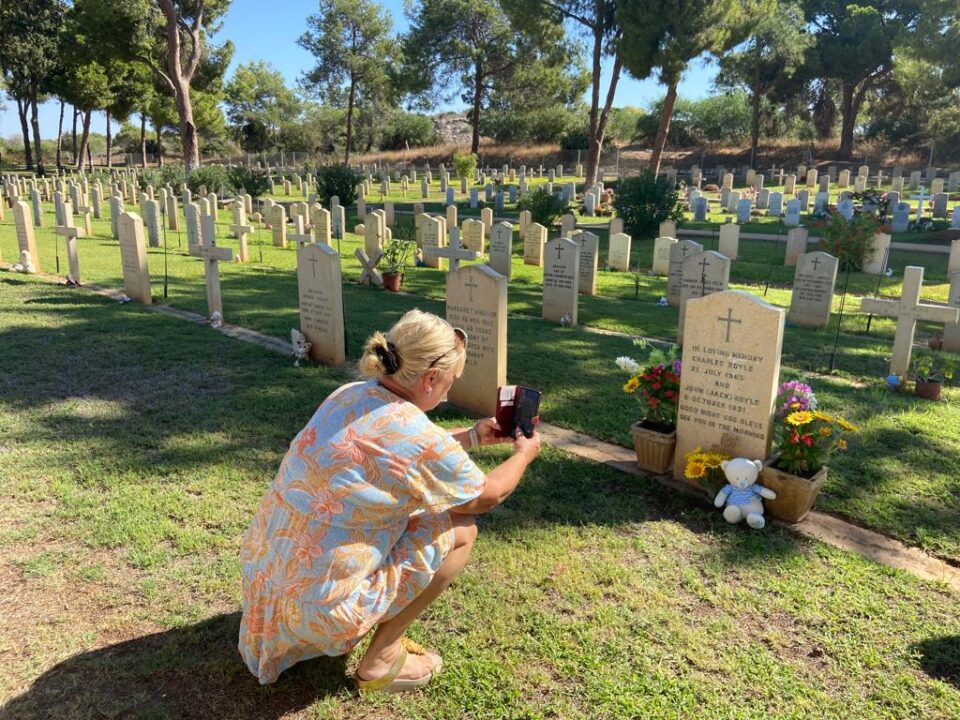 Mystery still surrounds the 1960s’ baby deaths at Dhekelia, but one woman is determined not to forget them

Hundreds of “sleeping babies” at the Dhekelia British military cemetery have been given toy bears to watch over them thanks to the dedication of Annie Macmillan Davies and the community which she has inspired.

This weekend marks the 500th bear laid there – with the final 20 to be placed atop the remaining children’s graves.

For the past year she has been making monthly trips from her house in Paphos across the island to commemorate and “care for those who sleep”.

The sheer number of baby graves at the cemetery – particularly the around 300 babies born to service families in the 1960s – has been the source of much speculation and even a British government investigation in the past, but Davies’ mission is totally personal: to remember the babies.

“I lost my own son at eight months old, and he’s buried in the UK, so I have that affinity with the loss of a young child,” Davies told the Cyprus Mail.

Many of the headstones in the neat rows of the grassy green cemetery read “1 DAY”, while others range up to nine months.

Many parents have since passed on or are likely to have left Cyprus a long time ago.

“The graves looked so bare, and I understood how difficult it must have been to have lost a child and after many years how impossible it must be to visit the graves from the UK,” she said.

“I totally understood as my child is buried near Scarborough and when I lived in Australia I ached each day to visit his grave.”

Annie’s mission is to remember the children and has seen a tight knit and dedicated community spring up to answer the call.  A Facebook group coordinates their efforts and members have assisted Davies in the sweltering Mediterranean heat to collect and place the stuffed toys.  Collection points such as the Dhekelia Thrift Shop and Oroklini Nifty Thrifty have aided the mission.

“Many families have contacted us and tell us how happy they are that we’re doing this,” Davies said, adding that on Saturday a couple visited who lost their baby boy in the 60s – she’s 82 and he’s 84 now.

“This will be their last visit to their little one’s grave.”

Davies told the Cyprus Mail that at first she hadn’t quite realised just how many babies were buried at the cemetery – having set herself the goal of placing a teddy bear at each of their graves.

They laid 13 bears down by the graves during their first trip, wondering how many more they would need.

Her husband, Clive, walked throughout the cemetery and found that there are 500 children’s graves in total.

“I then thought ‘oh my goodness, this is a mountain in front of me’ – but then the community grew and grew, as more people heard about what we’re doing,” she said.

Davies explained that her parents lived in Oroklini for 30 years, with both now buried at the cemetery. Her mother died in 2008 and Davies would then visit the grave with her father.

It was during those moments of reflection at the cemetery that her and her father were struck by the number of children’s graves.

“It was something me and my dad talked about and before he died – about four years ago – he’d asked me ‘what would you do if you won the lottery?’” she explained.

“I said that I’d put a teddy bear at each of these children’s graves, they seemed empty and forlorn,” Davies told us.

Her father passed away and earlier this year Davies told her husband that although she was never going to win the lottery – she wanted to place the bears at the graves.

And while this weekend Annie and her husband Clive achieved their goal of placing the 500 bears – they emphasise that it won’t stop there: they want to keep it going.

“We want to replace the ones that get weathered, so we’re going to keep collecting and replacing those,” she said.

“There were concerns that some parents may not have appreciated us doing this but we’ve since had 100 per cent of everyone who has contacted us has expressed their support,” Davies said.

That’s especially true for Desmond Smith, whose brother – who passed away at just under nine months – is buried at the Dhekelia cemetery.

His father was serving in Cyprus, with Smith’s baby brother being born in the early 1960s.

The period of early 60s up until about 1972 has emerged as one of controversy, mystery and pain.

The graves of nearly 60 babies, aged between one day and one month, who died in 1964 alone, are in one corner of the military cemetery. Another row of babies’ graves dates from 1963 when, in November of that year alone, at least 10 infants died. Nearby are dozens more baby graves from 1965.

The high turnover and short postings of service members on the island, combined with the absence of any medical records before 1966, meant decades passed until the seemingly higher than normal incidence of child deaths was noticed. As time passed, the call for answers grew.

But writing for the Cyprus Mail in 2009, Nathan Morley reported that a British government investigation into the deaths of the around 300 babies in the 1960s concluded that nothing untoward was to blame.

The British defence ministry launched the probe after rumours and speculation maintained that the deaths were caused by outbreaks of cholera, meningitis or even typhoid.

Many other theories also gained traction in the absence of formal statements.

The study was conducted by Stephen Evans, professor of pharmaco-epidemiology from the London School of Hygiene and Tropical Medicine.

The summary added: “Professor Evans’ overall conclusions are that the mortality rates are not notably out of line of what might be expected in the conditions existing in Cyprus in the 1960s.”

But that has left many unconvinced, including Smith, who maintains that 62 per cent of those buried at Dhekelia are babies.

Asked what the teddy bear campaign means for him, Smith told us: “Previously when you first entered you couldn’t determine what was what, but now you can immediately see the complexity of how many children are buried there because of all these teddy bears.

“She (Davies) has completely recognised with colour the situation here,” Smith told the Cyprus Mail.

He acknowledged that it was not what Davies set out to do – reigniting the speculation over what may have happened in the 1960s – but for him and many others it has touched them deeply.

“My brother was born in the military, he was born to the military – as a family – and was perfectly fit and healthy for the best part of eight and a half months,” he told us.

“But then he went to Dhekelia hospital for a baby check and a week later had a respiratory problem – dying of bronchial pneumonia,” Smith said.

He maintains that the defence ministry must do more to inform the families of the conditions at the time.

“My parents buried their son and a day later they were put on a plane by the military and taken from Cyprus,” Smith said.

The parents thought that there were perhaps only half a dozen babies buried at the cemetery – until they came back and realised the scale of it.

“Forty years later I was in a position to pay for their holiday, they hadn’t seen the grave in forty years – obviously they broke down,” he said.

Smith said that when his parents revisited the area so many decades later his mother saw a grave with a similar birthday to his.

“My mother turned to me and said ‘I’m glad we never stayed, if we had we would probably have buried you here as well’.”