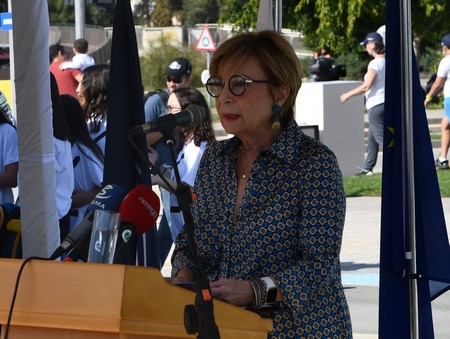 Police will soon launch a pilot programme with local councils where the public can participate with crime-prevention organisations on issues directly affecting their neighbourhoods, Justice Minister Stephi Drakou said on Sunday.

Speaking at the opening of ‘Police Week’ in Nicosia, an annual event where police get to show their ‘human-centric side’, Drakou said the programme aimed at promoting and deepening participatory society”.

“Representatives of schools, local authorities, civil society and more will have the opportunity to participate in these councils at a local level,” she said.

“We recognise the ever-changing demands and difficulties faced by every citizen, but also the new forms of crime that the police are called upon to face,” she added.

This was why her ministry and the police leadership were reorganising the force to meet increased operational needs using best practices and approaches.

Drakou said the annual ‘Police Week’ events were part of the policy to open a direct channel of communication with the public. During the week, school students would have the opportunity to visit the road safety park and get to know how different police departments work.

“In this way, they will understand the multidimensional role of the police, which is not limited to maintaining order and enhancing security but extends to a wider range of challenges facing our society,” Drakou said.

Events will take place between Monday and Friday. It also includes a photo exhibition of car wrecks with the age of the victims to raise awareness of road safety.

“In the perception of the public and especially young people, there is a perceived image of the police that is strict since they are the authority called upon to enforce the law and maintain order and security,” Drakou said.

“But the public should be able to feel that the police are there to support them as a partner through a modern model of social cooperation in the effort to create a safe society.”

The force’s five pillars are the fight against terrorism and radicalisation, serious and organised crime, improving the level of road safety, effective border policing, and tackling irregular immigration.

Internally, he said, the focus is on the modernisation of the force that includes the construction of a new police headquarters.

“We have evolved technologically, upgraded our fleet and equipment and invested in strengthening relationships and partnerships with local and international services, authorities and agencies,” he said.

“When the threats are global, the response cannot be local but international.”

Papatheodorou said a safe society was a shared responsibility and that included the participation of the public.

“All over the world police personnel risk their lives to help people. Many even made the ultimate sacrifice in the service of the people by giving their lives,” the police chief said.

He added that the vast majority of officers were self-sacrificing and conscientiousness.

“However, since every relationship, in order to be effective, must be two-way, from our side, we expect citizens to demonstrate a spirit of cooperation and a constructive attitude towards the police since a society with high levels of security, peace and order is ultimately, in everyone’s best interest,” he said.