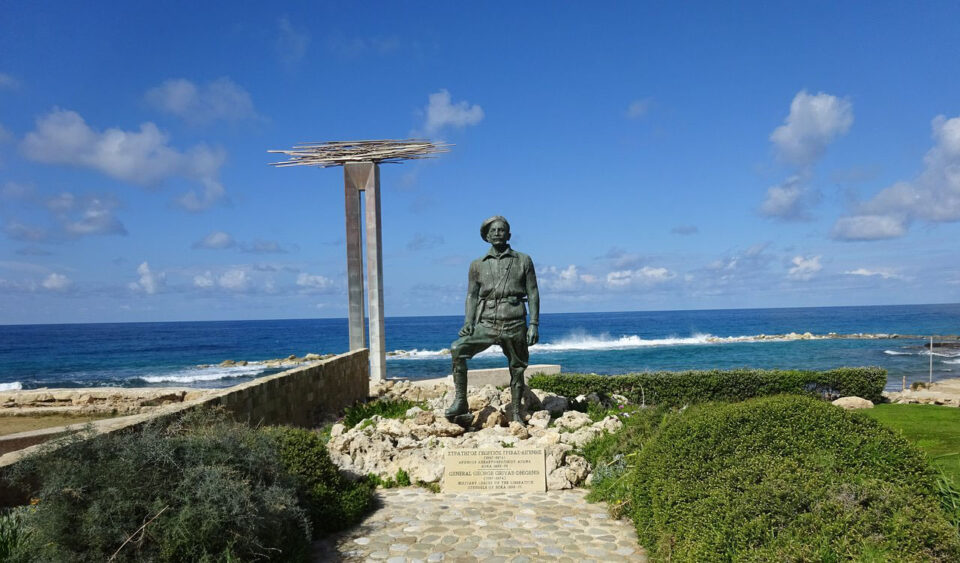 A memorial to Grivas

Everything is political – even museums in Paphos villages

A small village in Paphos and its wish to create what some view as a controversial museum has sparked a political outcry just four months before the elections.

This past week, main opposition Akel alerted that the House finance committee had unlocked the funding for a “Grivas Digenis museum” in the village of Chlorakas, where the controversial Eoka leader Georgios Grivas secretly arrived on November 10, 1954, ahead of the launch of the struggle against British colonial rule on April 1, 1955.

The party was referring to a supplementary budget which was passed in June. However, due to objections, the House committee was this week called to discuss the issue again and unlock the funding for the project.

According to Akel, not only was the funding for the museum, which had been given a less divisive different name, granted on Monday but it now had the blessing of Diko and Edek, parties which had originally opposed the funding.

“Unfortunately, this is the reality. It is disappointing,” said Akel MP Andros Kafkalias.

At issue is the home of the Azinas family allocated for the creation of what the village mukhtar Nicos Liasides had in 2018 termed as the “Chlorakas Historic Struggle Museum” to house a museum meant to be for all the wars Cypriots fought in, meaning both world wars, and the Eoka struggle in the fifties.

But Akel believes this innocuous name is a smokescreen for a museum celebrating Grivas.

In March this year Education Minister Prodromos Prodromou had sent a letter responding to a question by Akel MP Yiorgos Koukoumas, about the funds allocated to the Eoka foundation Simae for the small “Digenis Museum”.

“Regarding the purchase of the historic Azinas house, which is a small house of 60 sq.m. and its transformation into a small ‘Digenis Museum’ regarding his stay there, in the budgets of Simae from 2020 there was a fund for this topic in the monuments category. The purchase of the cottage was agreed with the owner for €107,000. The agreement is registered in the land registry department,” he wrote.

The funds being discussed at Monday’s session were for the third instalment on the Azinas house, which according to a response from Prodromou back in March would amount to €28,500.

“The attitude of the government, Disy and Elam, who still honour the arch-traitor of our country and who insist in times of economic suffocation of the people to throw thousands of euros into unhistorical far-right propaganda is not surprising,” Akel said this week but questioned Edek and Diko’s changed position.

“Since when have Diko and Edek changed their stance on Grivas?”

In June, the budget that was meant to be allocated sparked debate in parliament, as most MPs at the time, including Edek and Diko, said Disy was attempting to pass the funds by giving the museum a different name and saying it was dedicated to the world wars as well as the Eoka struggle.

Then, the head of Diko Nicolas Papadopoulos agreed with a request by Akel for an oral amendment to the budget referring to the paradox of the executive power changing the name of the museum.

But on Monday, Edek said: “The presentation of the museum in Chlorakas as a museum dedicated to Grivas does not correspond to reality. It is dedicated to the people of Chlorakas who fought during World War II in 1940 and during the struggle of 1955-1959.”

And during a debate in parliament on Thursday, Diko’s Papadopoulos, who had kept mum on the subject for a few days, stepped up and called Akel’s tactics “fake news about Grivas”.

Akel has not been the only one to react on the House committee’s decision, with the Pancyprian Association of Resistance fighters also chiming in on the controversial budget, and the NGO the Cyprus Peace Council speaking out.

The resistance fighters, a group formed of people that opposed Eoka B forces during the July 15, 1974 coup, said: “Unfortunately, the biggest insult to the recent decision is the collusion of the Diko and Edek parties with the Disy government and the extreme right. These parties, which since their foundation proclaimed their democratic origins and their tradition of resistance, betrayed the resistance struggle by voting in favour of funding a museum for Grivas.”

A member of Edek’s party office, Nemos Koutsokoumnis resigned over his party’s silence on the matter.

In his letter, Koutsokoumnis stated that he does not want to be associated “with parties that defend or vote for bills or cooperate with other political parties (Disy, Diko, Elam), that defend in any way the form of Grivas.”

The bicommunal NGO, the Cyprus Peace Council, also weighed in on the matter, condemning it in the strongest manner possible.

“Georgios Grivas was identified with political violence and is responsible for the death of dozens of progressive innocent people, Greek Cypriots and Turkish Cypriots. In his name and espousing his ideas, the treacherous coup d’état of 1974 was organised and imposed, which opened wide the doors to Attila,” they said. “The creation of a museum in his name constitutes a falsification of history, a challenge to the memory of our people and cannot be accepted.”

Commenting on the matter, Green party member in Paphos, and parliamentary associate Orestis Matsas, told the Cyprus Mail that Grivas’ later actions in the 1974 coup should be the measure of whether museums should be erected for him.

He asked since when did Diko and Edek changed their stance, as they had voted them down last June.

“This Grivas mentality continues to divide Cypriots today, and it shouldn’t,” he said.

He added that more weight needs to be put into solving the Cyprus problem and not dwelling and arguing over this person’s memory.

In a statement on Friday, Simae thanked parliament for releasing the last tranche of funds for the “Museum for the struggle for freedom of the people of Chlorakas”. The funds will help to pay for a guide and for the rest of the Azina home.

U.S.urges Ukraine to be open to talks with Russia-Washington Post (Update 1)