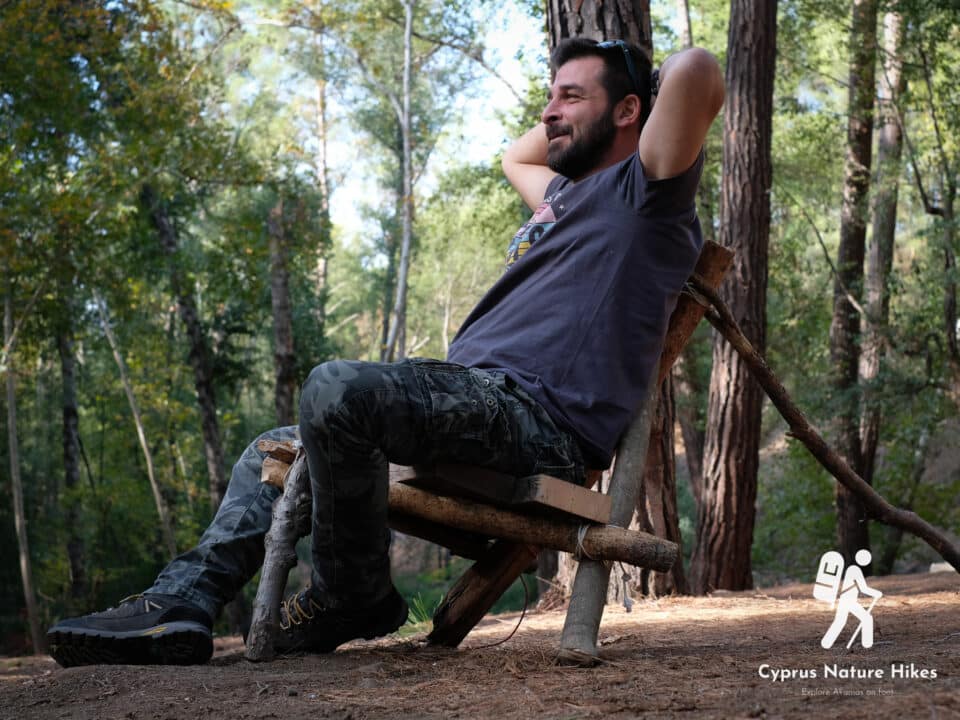 One of Cyprus’ foremost survival experts is the man you’d want by your side come nuclear attack or zombie apocalypse! He tells ALIX NORMAN how primitive skills are well worth learning even in today’s modern world

“Your life can change in seconds,” says Theo. “From one minute to the next, you can find yourself fighting for survival. Or, at the very least, in sudden crisis. Think about 1974. In mere minutes, life had changed forever and survival and escape became a matter of necessity. Now consider the threat of nuclear attack and what the fallout might do to Cyprus…

“But survival isn’t just about extreme situations,” he adds. “What about the changes Covid wrought: the lockdowns and restrictions that caught so many unprepared? Or a car accident, in which your phone is dead or you’re out of cell range – it happens more often than you might think; even that can be a threat to your existence.”

A survival and bush craft expert, Theo Theodorou isn’t quite Bear Grylls (he’s quick to dissociate what he does from the television star’s grandstanding exploits). But he is one of Cyprus’ foremost survivalists – the man you’d want by your side come a nuclear attack or zombie apocalypse!

Along with his cousin Yiannis, Theo runs the island’s first Survival and Bush Craft Workshops – teaching ordinary people the basic skills they need to survive almost any emergency. Both have a great deal of experience in their fields, and welcome the chance to teach others. Especially given that the majority of us don’t know one end of a knife from the other!

“Yiannis and I grew up in the region of Argaka,” Theo explains. “And every weekend and holiday, we were out in the wild: hunting, fishing, free diving, trekking, back-packing, hiking, camping, and foraging. We learnt a great deal from our parents and grandparents: traditional methods of cooking in the forest, how to find food and water in the wild.

“But we also taught ourselves through experience,” he adds. “And we tried everything. While our friends spent their weekends in the city going to parties and restaurants, Yiannis and I would head out into the hills alone. We’d stay overnight, building our own shelters, finding and cooking our own food. It was something we really enjoyed.”

Today, in their mid-forties, the duo have parlayed their experiences and skills into the Survival and Bush Craft Workshops. Both have completed a huge number of training courses (including advanced first aid) and still spend all their free time out in nature. And both are passionate about passing their skills on to the next generation…

“Because, “says Theo, “there seems to be a huge gap in knowledge. Yes, schools impart all sorts of useful information that stands you in good stead later in life. But they won’t teach you how to survive in a crisis. If you’re stuck in a survival situation, you can’t light a fire with a quadratic equation!”

The cousins have been running their workshops for a few years. “We launched our hiking and trekking groups in 2019 as a way to offer an alternative method of seeing Akamas,” he explains. “What’s happening there with all the cars and buggies – that’s very destructive. We wanted to help people explore the area on foot, allow them not only to discover new places, but also understand the nature they were enjoying.”

In that Akamas is a large area, these treks often took several days. From this was born the idea of Bush Craft and Survival Workshops, which would teach people the basic skills to survive in the wilds. The pandemic added to the workshops’ popularity: “When Covid came,” says Theo, “the world changed in an instant. It made a lot of people realise that the stuff we take for granted isn’t as stable as we imagined; that it’s always a good idea to know the basics of survival: how to plant, grow, cook, and preserve your own food; how to make basic tools. And, most importantly, how to be prepared for any eventuality.”

In their Survival Workshops (an eight-hour course that focuses on the theoretical plus the basic survival skills related to fire, water, shelter-building and orientation), the duo teach the skills needed to survive in spite of difficult circumstances: “The first aid and practical skills you’ll need; the information that’s vital to survival. We talk about the Rules of 3,” Theo adds. “You can survive without oxygen or in icy water for three minutes; without shelter in a harsh environment for three hours; without water for three days – always assuming you have shelter and oxygen; and without food for three weeks, as long as you have the other basics.”

In the Bush Craft Workshops, the wisdom is more hands-on and involves several nights in the wilds. “This is a discipline that lies between camping and survival,” explains Theo. “So we learn things such as shelter building, fire-lighting, water filtration and purification, foraging for plants and fungi, and navigation using natural methods of orientation such as the stars or the sun. In the more advanced levels we also teach tool-making, water-sourcing, primitive cooking, and crafts; the idea being that, the more advanced your skill-set, the less equipment you actually need to survive.

“Most people live their lives in the cities, taking their electricity, water, cell service, and internet for granted,” Theo acknowledges, “But what if something happened and you couldn’t ask Google what to do? As a trained First-Aider, there are many times I’ve assisted at the scene of an accident; in shock or without cell service, most people simply don’t know what to do. That’s where survival training comes in – it’s not just information that will help you survive in the wild – it’s a skillset that can be vital.”

Over the last 12 months, Theo and Yiannis have seen more and more people signing up to their workshops. “When we first launched, it was mainly foreigners who were interested. But now we’re getting a lot of Cypriots in their 20s and early 30s – it’s nice to see people appreciating the value of what was once considered traditional or primitive knowledge.

“Because that primitive knowledge,” he concludes, “is what kept your ancestors alive for thousands upon thousands of years. And, come a dire situation – be it attack, war, plague, natural disaster or simply an accident on the way to work – this is the knowledge that could keep you alive today.”

For more information on the Survival and Bush Craft Workshops, visit https://www.cyprusnaturehikes.com/