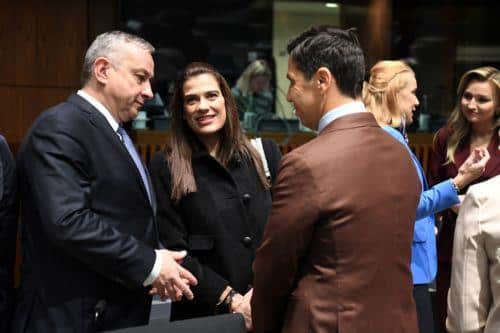 The Ministry of Energy, Commerce and Industry on Tuesday said that over the last two years its grant schemes have exceeded €330 million in total funding.

Of this amount, €171 million were allocated to programmes seeking to boost entrepreneurship, with minister Natasa Pilides saying that these programmes were “warmly received by businesses”.

Addressing an event in Paphos, Pilides said that in 2023, the government will announce schemes amounting to a maximum of €120 million to support businesses, of which €80 million will be aimed at promoting investments for energy storage, combined with renewable energy source usage.

Other grant schemes that will be announced include consulting services to small-to-medium-sized enterprises, implementing circular economy activities and actions, digital upgrading and forging partnerships and synergies.

What is more, the Energy Minister said that the new industrial policy for 2019-2030 is already helping to increase productivity, innovation and Cyprus’ exports.

“Today, the contribution of industry to Cyprus’ GDP in 2020 amounted to 8.1 per cent, while this percentage for 2022 is expected to reach 8.5 per cent,” Pilides said.

“Another indicator that is increasing is the level of employment in industry, reaching 9 per cent of the labour force, up from 8.1 per cent in 2020,” she added.

Finally, Pilides said that “it is very encouraging to see new synergies between researchers and industrialists to develop innovative products and high added value services”.

Cyprus-based education technology company Gear Education on Tuesday announced that it has entered into an official partnership with Showbie, with the Cypriot firm acting as a reseller to schools and organisations in Cyprus and Greece.

According to the company, Showbie is a Hybrid Learning Platform designed for the way teachers work, with its purpose-built features making it easier to manage classroom workflow and save time.

Moreover, the platform combines all of the essential tools for assignments, feedback, and communication, and can be accessed through iOS and iPadOS apps or a web browser.

The company explained that by partnering with Showbie, Gear Education is “empowered to provide schools and organisations with a simple and powerful teaching and learning tool that helps bring students, teachers, and communities together”.

In addition, as part of the education technology services they offer, Gear Education can sell Showbie licenses and assist with Showbie training and support.

“Showbie offers the flexibility that is needed in teaching and learning,” Gear Education founder and former educator Christina Shailas said.

“It gave me the ability to better connect with my students,” she added, commenting about Showbie’s customisable features, including one that gives the ability to upload differentiated content, allowing teachers to adjust their lessons to individual learning needs.

With a range of tools at their fingertips, students can also demonstrate their learning in the way that suits them best.

“Through this, my students taught me how they learn best. Once you teach using Showbie, you won’t be able to imagine teaching without it,” Shailas concluded.

The general Cyprus Stock Market Index was at 86.83 points at 12:52 during the day, reflecting a rise of 0.15 per cent over the previous day of trading.