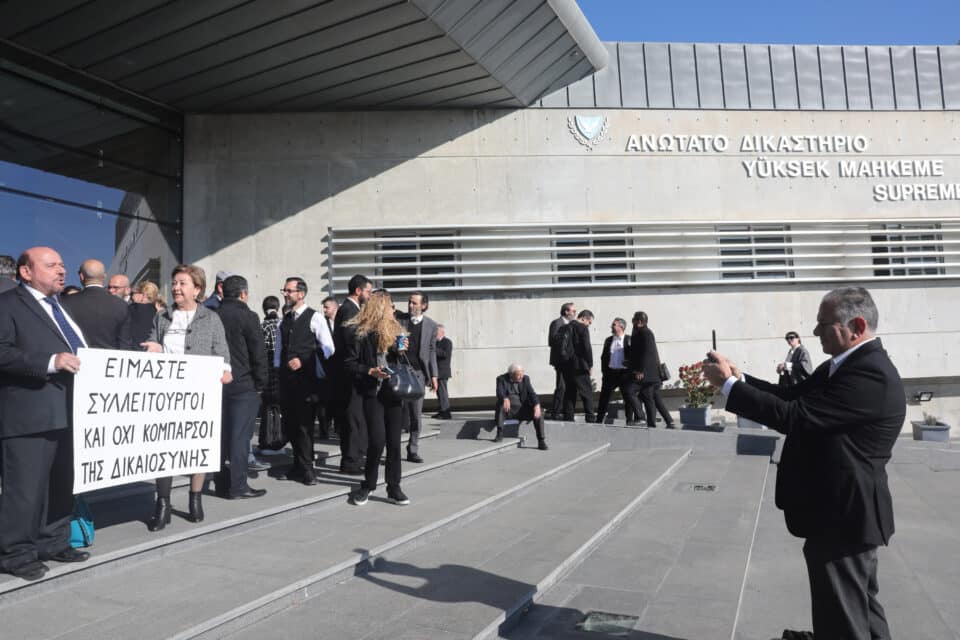 Lawyers in Cyprus on Thursday morning held a pre-warned two-hour work stoppage protesting against new rules issued by the Supreme Court that would open the way for ‘express trials’.

“We will not accept the unilateral introduction of a heterogeneous and unfair procedural institution,” the president of the Pancyprian Bar Association, Christos Clerides, said.

According to the Cyprus Bar Association, the measures were taken with the aim of immediately suspending the regulation and in case there is no response, the association said it reserves the right to escalate measures.

In a statement, the Bar Association expressed both its opposition and its concern about the multiple and serious consequences that arise through the Late Cases (Special) Procedural Regulations of 2022.

It argues that “the only thing that is achieved through the promotion of unilateral solutions is the unbearable pressure on lawyers, litigants and judges to proceed with the proceedings, seemingly at a rapid pace, a fact that further inflates the problems in the field of justice and irreparably harms the rule of law and the Cypriot citizen,” Philenews reported.

According to Clerides, what worries lawyers “is that our clients will unfortunately be faced with unbearable pressure, which will far from lead to a fair trial.”

“You cannot abolish overnight basic rules of adjudication of a case with the constitutional right for each party to have sufficient time to prepare for his case and to summon those witnesses who he deems will help with his case,” Clerides noted, adding that “this is a constitutional right that is not even amenable to restrictions even with the words and context of Article 30 of the Constitution. So these regulations cannot be accepted,” he said.

Clerides explained that an attempt was made to introduce a piece of the regulations, known as the Dyson regulations, which would normally come into effect in September 2023.

He pointed out that “you cannot take a piece of these regulations that are the culmination of a philosophy that precedes these regulations, through which the case is filtered to reach its final stage and introduce them in a hurry without notifying the Cyprus Bar Association of the proposed text and expecting that in this way you will solve the problems of justice”.

Clerides noted that there are about 50,000 cases pending in total.

He added that 90 per cent of cases were adjourned because either the court had an ongoing hearing or another earlier case preceded it. The remaining 10 per cent of the cases, where lawyers asked for a postponement, were approved by the court, which meant that the court accepted that there were reasons for the postponement, he explained. “They can’t put all the problems on the lawyers. This thing will never be accepted,” he stressed.

Clerides called on the Supreme Court to rethink the whole issue, review its decisions, suspend the application of the regulation and sit down at the table of discussions with the Bar Association to find ways to improve any regulation.

At the same time, it proposed to implement it with a package of measures, which includes the appointment of retired lawyers, the filling of the 11 vacant positions for judges, which are pending, the implementation of the justice reform for which the Supreme Court is asking for a postponement until July, as well as the introduction of the institution of remote hearings on certain issues, such as for interim applications or even for appeals.

Clerides added that next week, a special committee set up by the Cyprus Bar Association, which helped draft the Dyson regulations, will meet to prepare a report together with the reports of the presidents of the local associations.

He also noted that he is preparing relevant démarches to the European institutions, while asking for the patience, solidarity and support of lawyers.

“It is the beginning of a great struggle and I am sure that in the end we will be vindicated,” he said.

Meanwhile, lawyers in Paphos claimed that the Supreme Court imposed procedural regulations for “express trials” in an attempt to “liquidate” rather than try the cases.

“The procedure decided by the Supreme Court is to the detriment of the parties and lawyers who will be unable to cope,” the representative of the Paphos Bar Association at the Cyprus Bar Association, Sofia Hadjineophytou, told Philenews.

“These actions are knee-jerk moves by the Supreme Court that were made without consulting the Cyprus Bar Association,” she stressed.

“We have submitted numerous suggestions for a comprehensive settlement of the issue of delays and we insist on them, stressed the representative of the lawyers. Instead, however, we suddenly see a procedural institution, on which we did not agree, and a piecemeal attempt to shift the problems to lawyers and their principals, she concluded.