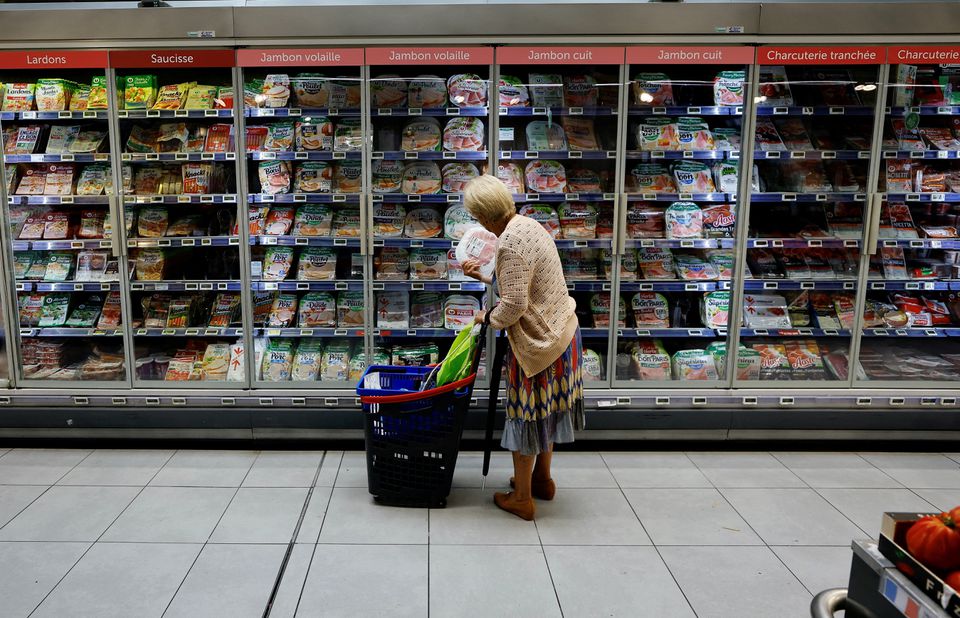 A customer shops in a supermarket in Nice, France, August 18, 2022. REUTERS/Eric Gaillard/File Photo

Euro zone inflation may have peaked but will subside so slowly that it could be years before it gets back to the European Central Bank’s 2 per cent target, keeping pressure on the ECB to tighten policy well into 2023.

Having raised interest rates by a record 200 basis points since July, the ECB has already taken a giant step towards taming inflation which hit 10.6 per cent in October before easing last month to 10.0 per cent – still five times the target level.

Pipeline pressures remain abundant, however, with energy prices still sky-high, unemployment at record lows, and wage growth accelerating. Government stimulus measures are working against the ECB’s policy tightening, and too much of the energy price rise has seeped into the broader economy through second-round effects, fuelling underlying price growth.

Meanwhile, a recession that was expected to ease inflationary pressures is now seen milder than feared.

All of this suggests inflation will ease back from record highs only slowly in the early months of 2023, with underlying inflation, more closely watched by some ECB policymakers than the headline figure, remaining stubbornly high.

“The core inflation rate is unlikely to peak until mid-2023 and will only fall slowly thereafter,” Commerzbank economist Christoph Weil said. “Against this backdrop, the ECB’s goal of pushing the inflation rate back to just under 2 per cent on a sustainable basis seems a long way off.”

If disinflation proves too slow, firms and consumers may lose confidence in the ECB’s commitment and adjust their wage- and price-setting behaviour to reflect higher inflation, perpetuating rapid price growth.

While that has not yet happened, longer term inflation expectations are uncomfortably high and continue to trend up. A key market-based indicator , often cited by the ECB, now stands at 2.4 per cent, well above the 2 per cent target, and has moved up even as policy is tightened.

The ECB’s new projections, due out next week, are set to show inflation above target through 2024 and only falling to 2 per cent in 2025.

“The second-round effects will drive inflation next year and in 2024,” ECB Chief Economist Philip Lane said.

A recession was set to do some of the heavy lifting in easing price pressures but the downturn may be more benign than feared, a raft of recent indicators – from confidence data to output figures – suggest.

Gas storage facilities are full, meaning energy rationing is unlikely, and governments are helping households and businesses via subsidies. Supply bottlenecks, which drove inflation as economies emerged from the pandemic, are easing.

“The current situation remains dire, but firms and households are now seeing the light at the end of the tunnel, becoming more optimistic for the future,” Katharina Koenz at Oxford Economics said. “A robust labour market should support households through the continuing squeeze from energy prices.”

The buoyant labour market may be a problem.

At 6.5 per cent, unemployment is at a record low as firms, keenly aware of how tough it was to get workers back after COVID-19, avoid letting people go.

“We think companies will be reluctant to lay off workers as they struggled to hire people in recent quarters,” J.P. Morgan’s Raphael Brun-Aguerre said.

Wage growth, a precondition of durable inflation, is accelerating meanwhile, leaving policymakers with a dilemma.

Some catching-up is necessary after this year’s rapid rise in consumer prices reduced real incomes. But it is not evident that after a few years of above-trend growth, wage-setting will fall back in line with the ECB’s target.

“Wage growth is likely to reach around 4 per cent at the end of this year and stay there next,” Bank of America Merrill Lynch said. “Hawks will try to label that as evidence of second-round effects from inflation. We are not convinced.”

Added up, the pipeline pressures suggest the ECB is far from done with rate hikes and its 1.5 per cent deposit rate could still double before its job is done.

“I think starting to talk about where we’re going to end up is probably premature and I can see scenarios where we go beyond 3 per cent,” ECB policymaker and Irish central bank chief Gabriel Makhlouf told Reuters in an interview, referring to market pricing that point to a peak rate just below 3 per cent.