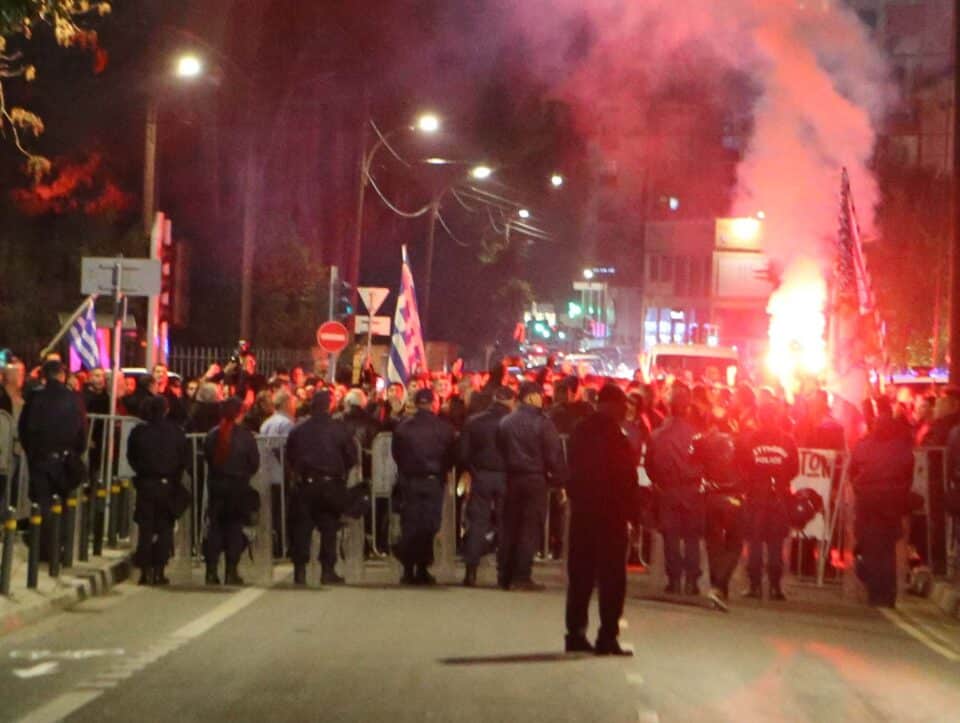 By Elias Hazou and Sarah Ktisti

The House on Thursday decided against cutting funding to activities or foundations commemorating Eoka leader Georgios Grivas, as supporters of the historical figure mounted loud protests against the proposals outside the parliament building that were condemned as “an offence to democracy”.

Main opposition Akel and the Greens had filed bills – amendments to the state budget bill – that would have stopped all state funding related to activities, events, memorial services, the erection of monuments, guided tours and publications about Grivas.

But during voting at the plenary session – the last before parliament goes into recess ahead of the presidential elections – the bill was defeated by 35 votes against and just 17 for.

A second similar amendment had intended to cut funds allocated to the junior ministry of culture that would have gone to the Grivas Memorial Foundation. It was also defeated by 35 votes against and 15 for.

While MPs were voting, supporters of Grivas were protesting outside.

Police closed the road outside and set up barricades around the parliament building, keeping a close eye on Grivas supporters who chanted slogans – ‘Cyprus is Greek’, ‘Grivas is with us and guides us’, and ‘Anarchists and Bolsheviks, this land is not yours’.

A controversial figure in Cypriot history, Grivas – nicknamed ‘Digenis’ – was the leader of Eoka, a Greek Cypriot nationalist paramilitary organisation that fought a campaign for the end of British rule in Cyprus, and for eventual union with Greece.

No incidents of physical violence were reported at the demonstration.

But during the budget debate, Edek leader Marinos Sizopoulos suddenly walked out after hearing that his party’s offices in Nicosia had been vandalised.

The glass front of the offices was smashed, and a flare or Molotov cocktail – it was unclear which – tossed inside. A small fire broke out, which was extinguished minutes later.

The incident – treated as malicious destruction of property and attempted arson – was reported to the police around 6.30pm.

Interviewed by media crews at the scene, Sizopoulos spoke of “thugs” and vowed that his party would not be intimidated.

Back in parliament, still debating the budget, Greens MP Alexandra Attalidou asserted that “violence” had been committed against her by the pro-Grivas protesters outside.

She said the crowd had hurled insults at her.

Lawmakers were unhappy that some of their colleagues – Elam’s Christos Christou and independent MP Andreas Themistocleous – had chatted briefly with the protesters.

In a Tweet later, House Speaker Annita Demetriou condemned the goings-on outside parliament.

“The manifestation of any form of violence, the vandalisms at parliament and at Edek’s offices, the insults and offensive language against MPs are the worst possible offence to democracy itself.”

What had set the scene for Thursday’s tensions was a House resolution passed last week. Proposed by Akel, the resolution made explicit references to the role of Grivas, dubbing him “unworthy of any honour.”

It also called on the state to stop financing any activities linked to paying tribute to Grivas.