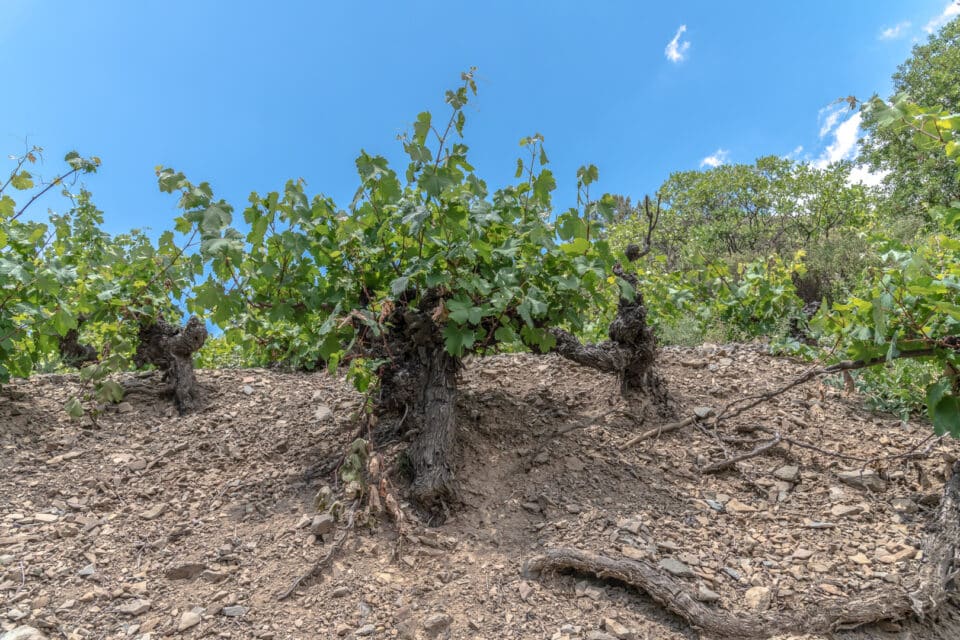 In Farmakas a winemaker is making wine the old-fashioned way from old vines, with extraordinary results

Seven years ago, Daniel Anastasis, owner of Santa Irene Winery in Farmakas, and his viticulturist/winemaker, Evangelos Bakalexis, discovered that one of the high-altitude, abandoned vineyards they had taken over from a neighbour was replete with beautiful vines that were between 135 and 150 years old. Most were Mavro Ambelisimo vines, and the rest were Xinisteri, the two most often planted grape varieties in Cyprus since wine was first produced here about 5000 years ago. Thrilled with the discovery, they vowed to bring these old vines back to productive fruition and named the vineyard Vinea Ardua.

It takes about three years before a grape vine produces fruit that can be turned into wine. At seven to eight years old it is considered an ‘adult’, and from 12 to 25 years old it is called ‘mature’. To be designated ‘old’ the vine must be more than 25 – preferably over 50 – years old.

At 400-plus years of age, the oldest living grape vines today are in Maribor, Slovenia, and wine is still being produced from their zametovka grapes.

Why would Daniel Anastasis and his winemaker be excited by gnarly, twisted old vines that had suffered through 150 years of intense Mediterranean sun, wind and rain? Isn’t it better to make wine from fresh, energetic vines pulsing with the vigour of youth? Doesn’t old mean weak, feeble and close to the end? If we are referring to humans or automobiles the answer is most often yes – but for grape vines it’s an entirely different story.

Suffice it to say that the vine must struggle more to flower into fruit, and although that struggle produces less fruit, all the desirable qualities are more concentrated in those grapes by the time they are harvested, resulting in a more concentrated, more complex, more powerful and richly flavoured wine.

Old vines are also less affected by climate changes, and wines made from the fruit of old vines have proven to have a greater potential for ageing well.

Do old vines always produce better wines? Most of the time, yes, and certainly in Cyprus where almost all the indigenous grapes are celebrated; the Mavro Ambelisimo grape has been growing in Cyprus for 5-6,000 years and is still the most widely planted. Depending on how old the vines are, you will notice a marked difference in aroma, intricacy, depth and intensity of flavour.

The only real disadvantage to continuing to use old vines is that they produce far fewer grapes than young vines (the old vines of Santa Irene give only 2.5 tons of grapes per hectare against an average of 20-40 tons), so the winemaker must be resigned to having far fewer bottles to sell.

Santa Irene’s Vinea Ardua (meaning steep or arduously sloped vineyard) comprises 20 hectares of high-altitude, sharply inclined hills of old vines that Daniel and his crew have been labouring to make officially organic since 2018. Besides the enormous benefit of the ancient vines, there is an absence on these slopes of terracing – a system that can negatively affect drainage and sun exposure. And because there is plenty of morning dew misting across the vineyard, there is no need, or desire, for irrigation.

“To bring good health back to the vines,” says Daniel, “we used special pruning methods that allow the body of the plant to renew itself while continuing to function with the same root system. This took a great deal of time and careful, detailed management. This vineyard, one of highest in Europe, is 1,350 metres above sea level, and its steepness can make for exhausting, sometimes dangerous, labour. We handpick the grapes and clean them, cutting the fruit from the stems, right there in the field.”

Some would say that Daniel is unnecessarily making the whole process even more exhausting by reverting to ancient winemaking methods once the grapes are harvested. He is making three different wines from the Vinea Ardua fields: two Mavros (Aepys and Aeoneo) and one Xinisteri (Eteon). The Xinisteri and one of the Mavros are first fermented in pitharia, giant clay jars from the 1800s, that were found in or near Farmakas. No yeast is added, only naturally occurring yeast from the skins is relied upon to turn the grapes into wine. There is a thrice-daily stirring and punching down of the grapes with mankouria (shepherd’s staffs) for six weeks, then a vertical manual press extracts the juice which is transferred to and matured in oak barrels for six to nine months. There is minimal intervention. The wine is not fined or stabilised and it goes into bottles slightly filtered where it rests for another six months. The other Mavro, the Aepys, is fermented in stainless steel and oak-barrelled for half a year.

“Our winemaking method for these special wines is from the time of Christ,” says Daniel. “It took a lot of hard work to resurrect this Vinea Ardua vineyard. And we are getting only about 20,000 bottles of wine from the 16 hectares (39 acres), but we can now see, and our happy customers can see, that it has been worth it. The wine is truly something special!”

The proof is in the glass

Having sampled the wines, I have to say all three are nothing short of extraordinary!

The first harvest of the three wines – Eteon (meaning genuine), Aepys (high and steep), and Aeoneo (eternal) – was in 2020 and they are finally available this year.

The Xinisteri (its colour close to orange) is so rich, so complex for a Xinisteri, and so deeply satisfying you might be confused into thinking you are tasting a fine white Bordeaux. It has great body and roundness in the mouth, but at the same time, it is marvellously thirst quenching, as a good tart Xinisteri should be.

The steel-fermented Mavro, is several cuts above the majority of Mavros in Cyprus. It has high character and strength but is extremely smooth on the palate and will enhance any food it accompanies.

The Aeoneo Mavro is in a class by itself. In Cyprus we are lucky to have several world-class red wines that can rival the premium wines of France, Italy, Spain and the New World. The Aeoneo, in my opinion, is at the top of that list. From the first sip it elevates you to a loftier plane of oenological pleasure. The complexity, uplifting energy and lushness of this ancestral-vineyard Mavro are qualities usually found only in a vintage Cabernet Sauvignon, a high-end Shiraz or an old-style Merlot (as in Petrus). Master of Wine, Caroline Gilby, has said about old vines, “. . . because these venerable, gnarly beasts are not easy, nor generous with their yields, they tend to attract a certain kind of producer who is committed to quality above all.”

And there we have a custom-tailored description of Daniel Anastasis and his Vinea Ardua vineyard at Santa Irene, Farmakas.

Matthew Stowell is a wine and food writer who has lived and worked in Cyprus since 2005. His Stowell’s Guide to the Wines & Wineries of Cyprus is available from Amazon and from bookstores in Nicosia, Larnaca, Limassol and Paphos