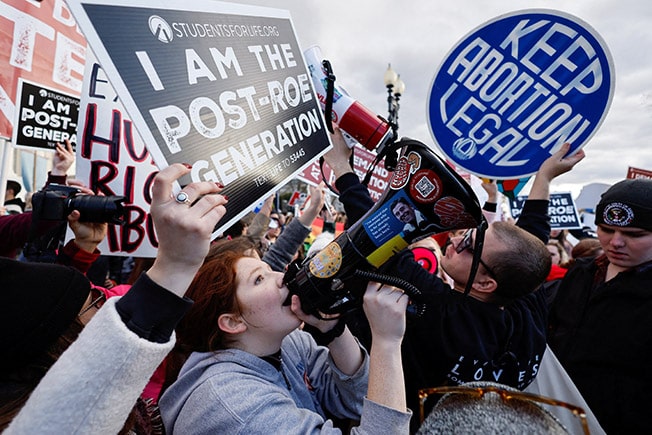 Thousands of abortion opponents rallied in Washington on Friday for the 50th annual “March for Life,” marking a new chapter for a movement that has organized for decades around overturning Roe v. Wade, the landmark ruling that recognized a women’s right to an abortion.

With that ruling now thrown out, March for Life leaders and activists were celebrating their movement’s win, pushing for stricter limits on abortion at the state and national level, and praying to change the “hearts and minds” of Americans who support abortion rights.

“We are not yet done,” March for Life President Jeanne Mancini said to the crowd, which appeared thinner than the previous year but still spilled across the National Mall.

“We will march until abortion is unthinkable,” she said.

Since the end of Roe on June 24, 2022, 12 states have enforced total abortion bans with limited exceptions and abortion is unavailable in two additional states, according to the Guttmacher Institute, a reproductive rights research and advocacy organization.

Rally-goers said they wanted to see abortion banned in every state, at every stage of pregnancy. Some held signs that read, “I demand protection at conception” and “abortion is genocide.”

“Life begins at conception,” said Kathleen Stahl, a 60-year-old nurse from Washington, D.C., who works in maternal and child health.

Stahl and others said that beyond abortion bans, they wanted to see more legislation aimed at getting resources to women struggling with unexpected pregnancies.

“We need to provide healthcare to our mothers, and a lot of our young mothers need more support,” Stahl said.

Activists recited the Lord’s Prayer and chanted “We love babies!” as they followed a slightly different route than in previous years. In a nod to their Supreme Court victory, they did not head directly to the high court’s building but instead passed in front of the U.S. Capitol, where they hope to see federal anti-abortion legislation enacted.

The event took place two days before what would have been the Roe v. Wade decision’s 50th anniversary.

Abortion rights advocates were marking the occasion by reflecting on the enormous disruption in U.S. reproductive healthcare over the last year, and calling for more legislation to protect abortion rights.

“On what would have been Roe’s 50th anniversary, we are instead facing the deepest crisis in abortion access in 50 years,” Herminia Palacio, president of the Guttmacher Institute, said in a statement.

Scalise touted the Republican-led House’s passage of the “Born-Alive” bill last week, which aims to protect the welfare of infants in the very rare occurrence that they are born during abortion procedures. The Democratic-led Senate is unlikely to pass the bill.

Going forward, the March for Life organization plans to ramp up its state march initiative to push for more state-level restrictions, Mancini said.

The first state iteration of the national march took place in 2019 in Virginia. In 2023, the organization aims to hold 10 state marches, including in Arizona, Virginia, California and Connecticut.

Among the states where Mancini would like to see the march movement expand next are those where the anti-abortion movement has suffered recent defeats, such as Michigan, she said.

Swiatek stays grounded ahead of clash of champions