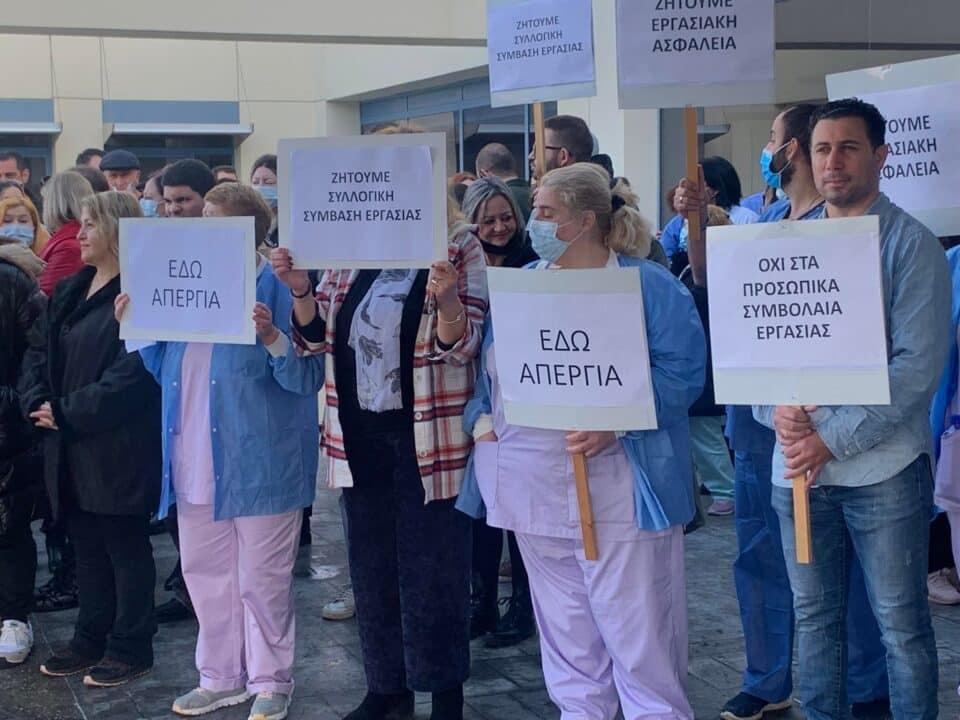 All issues with the collective agreement for state health services (Okypy) employees will be open for discussion, the organisation’s spokesman Charalambos Charilaou said on Wednesday.

The issue involves medical staff on individual contracts, and he said that the involved parties would all be meeting next Tuesday, but that there were no indications on the outcome of the discussion.

Last week, medical staff at state hospitals went on a two-hour strike over the matter.

Charilaou spoke to CNA, on the new proposal for concluding a collective agreement for the employees, hired from 2019 with personal contracts, which was presented a day ago by Okypy to the trade unions Sek, Peo, Deok, Pasydy, Pasyki and Pasyno.

Unions were disappointed by the proposal sent to them, saying it was “inferior” and failed to meet their expectations.

They consider that Okypy’s new proposal fails to meet the criteria for a discussion on establishing collective agreements for employees in the organisation.

On Wednesday however, Charilaou expressed the hope that through a fruitful and constructive dialogue, an agreement will be reached so that a collective agreement can be signed, which covers the workers and takes into account the financial autonomy of Okypy.

“Okypy needed to submit a proposal for concluding a collective agreement, which it did yesterday afternoon, in the presence of the health ministry,” he said.

He added that the discussion on Tuesday was not geared at finding a solution or to sign the proposal, it was simply to submit it.

A further discussion on the issue will be held on January 31, he said, noting that the organisation is willing to discuss whatever issue arises.

Commenting on the unions’ reactions, Charilaou said that at Tuesday’s meeting they will be able to raise any issues they have.

Weighing in on the proposal submitted by Okypy and the subsequent reaction from unions, Health Minister Michalis Hadjipantela said that he understands the positions of both sides.

He added that if talks hit an impasse there is a plan in place to reach a solution.

“We must all understand that Okypy is an independent organisation with its own board of directors. We have to let this independent body consult with the unions, see where they end up and if they don’t end up anywhere, then with good will, we will try to find a solution,” he said.

He added that there is a plan, but that he hoped the ministry will not have to use it.

After the proposal was submitted unions described it as akin to “reheated food”.

Expressing disappointment, unions said “the proposal presents nothing new” and is missing the basic principles required in collective agreements. If Okypy does not step up, then the unions will go on strike, they said.

Okypy’s proposal concerns thousands of staffers working in the state health services that were hired in 2019 with personal contracts. Unions are instead seeking collective agreements that reflect those in semi-government sectors.