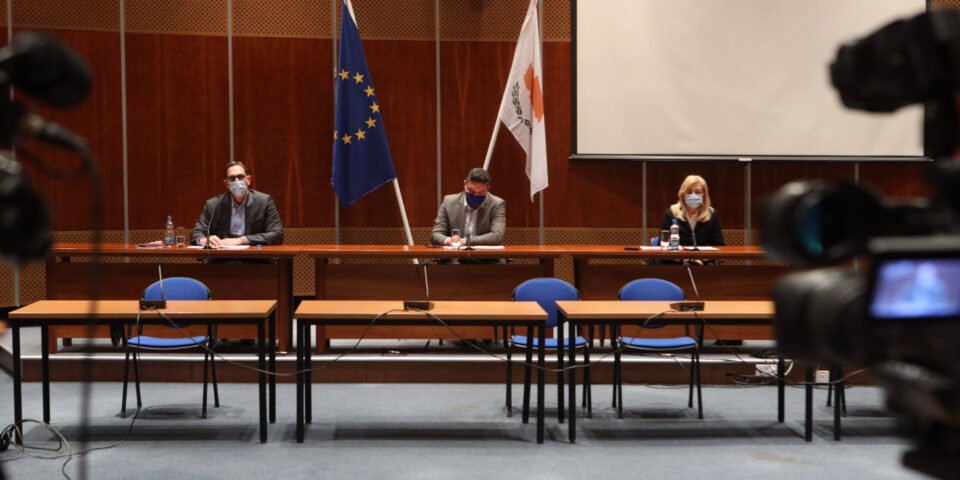 Health, Finance and Labour Ministers announce cabinet's decisions on the easing of the lockdown

The welcome news that dining out was back on the cards from Tuesday, if only outdoors, as part of the relaxation of measures, was tempered on Friday by news that Limassol primary schools were being closed and gymnasiums pupils would also have to continue online classes for another two weeks.

Health Minister Constantinos Ioannou on Friday announced the relaxations that fell short of a substantial lifting of lockdown following a meeting of cabinet to review the measures amid a surge in coronavirus cases and an increase in hospital numbers that has now precipitated a plan to up the number of Covid beds in hospitals, specifically in Larnaca and Paphos.

Limassol primary schools have been told to suspend operations for two weeks while gymnasium pupils will not be allowed back to school until the end of the month, Ioannou said. This drew the ire of parents, especially in Limassol who called the move “Inexcusable”.

The parent of a gymnasium student said: “So I can take my child to a café, or he can sit with his friends without fear of transmitting the virus, but going to school, where protocols are kept, masks are worn and tests are performed is more dangerous?” he continued.

But the minister said the move was necessary. “The aggravated epidemiological picture and the increase in the number of patients is a cause for concern and it calls for us to be vigilant. If infections continue at this rate, our primary goal of protecting the health system will be jeopardised and drag down the good performance we have achieved,” Ioannou said.

“On the other hand, we are listening to the strong concerns of experts that psychological fatigue is pervasive throughout society after a year of unprecedented and difficult conditions, and that the measures may not have worked due to this fatigue. What we need to do is find the balance so we can move to the end of this health crisis.”

Ioannou said the government did not want to reinstate measures and that is why “we need the cooperation of all our fellow citizens”.

Following the cabinet meeting, the minister announced that from Monday, up to six people from different households can gather in squares and parks with the use of mask.

From Tuesday, restaurants, cafes and bars will be able to serve seated customers but only in outdoors areas while the curfew will start at 11pm instead of 9pm. The SMS system remains in force. No maximum number of persons is specified in the outdoor dining areas as it will be contingent on the space available to each in line with social distancing measures. The maximum number of people per table in outdoor dining areas is eight people, regardless of age, the minister said.

Just for Green Monday, March 15, gatherings are allowed at picnic sites and dams. The maximum number of people who can gather on Monday at such sites is six adults in addition their minor children.

The minister said the rise in hospitalisations was a cause of concern adding that the average age has decreased, with admissions of healthy younger people who develop severe cardiorespiratory symptoms.

He added that the latest transmissions were within the family and workplaces, while crowds are observed in banks, accounting firms, consulting services, human resources departments and the public sector. Because of infection spread in the workplace, authorities are restoring a 30 per cent ceiling to the number of employees in service sector businesses.

Acknowledging the fatigue due to the pandemic, the minister said decisions for the measures were taken keeping in mind the growing burden of the epidemiological picture, the low level of compliance but also the need to provide psychological support to people amid a protracted pandemic.

Ioannou pointed out that the situation in the community was deteriorating, with a greater burden in the Limassol district. He added that the epidemiological picture in primary schools all over Cyprus is burdened with extremely worrying data, again, in Limassol.

“Increased transmissibility and disease are now linked to the British mutant variant, which is found in the community and as shown by data from the analysis of samples from the ECDC, its incidence rate is 25.7 per cent,” Ioannou said.

The finance and labour ministers also announced a series of support measures for workers and businesses.

Neophytou meets Akinci, Nami in north ahead of Cyprus conference