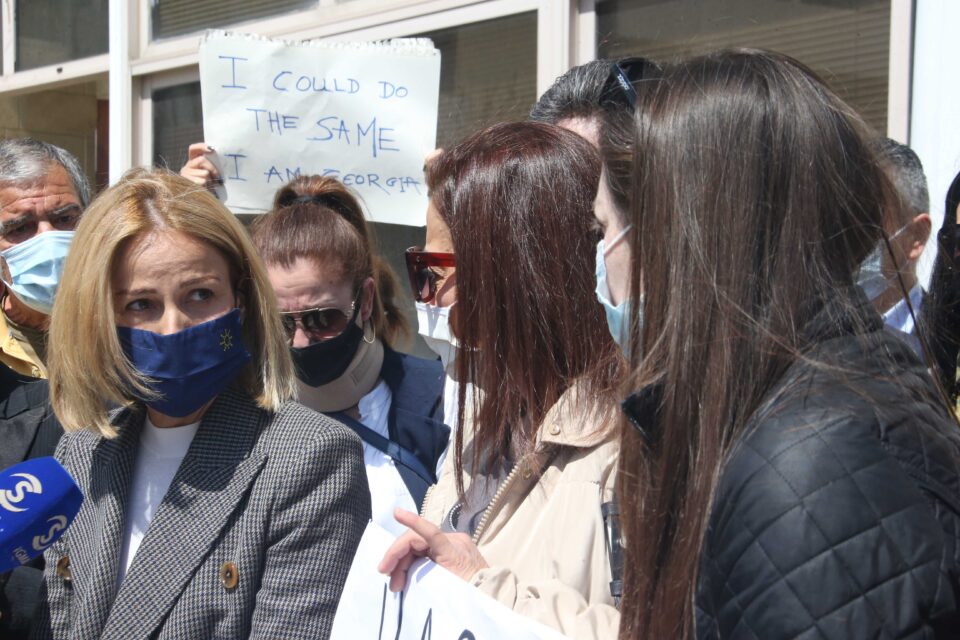 The mother along with family members and supporters, gathered outside the justice ministry on Saturday calling for help from authorities. Justice Minister Emily Yiolitis was also there (Photo: Christos Theodorides)

The five-year-old boy whom the court ordered must return to the US after his father took the mother in court for abducting the child in 2017 and bringing him to Cyprus, is expected to travel to the US within the week, it emerged on Tuesday.

The child was delivered on Monday afternoon by his mother to a social welfare official after a court decision last month ordering her to hand her young son over so he can be returned to his father in the US.

The father’s lawyer, Panayiotis Tsangaris, told the Cyprus News Agency that the boy was delivered by the social welfare official to his father.

Tsangaris said the child was initially hesitating, but that this lasted only about 20 minutes since later father and son shared tender moments with hugs and kisses. He said his client has no intention of keeping the boy apart from his mother. After he was delivered to his father, the boy had communication with his mother, while they will talk daily, but also during every stopover during his trip to the US, Tsangaris said.

According to the lawyer, many efforts were made for the smooth transition of the child to the US and for the issue of communication between the mother and the child. “Our effort, since last Sunday, focused on finding the best possible solution to the issue of transition and communication,” he told CNA. Custody would be decided by courts in the US, he said.

Tsangaris said that last 10 days were “hellish” for everyone involved and urged people thinking of abducting their children to reconsider arguing that when parents are tormented by some issues, they should resolve them where they are instead of resorting to illegal actions.

He also said that efforts were underway so that the five-year-old’s mother gets a visa so that she can travel to the US.

Referring to the custody issue, Tsangaris said if the two sides agree on this issue it must be declared in US courts. If they do not, then a legal struggle will start in the US, with massive costs, between €25,000 and €250,000, he said.

Justice Minister Emily Yiolitis pledged last week the state’s support to the mother who had expressed concerns over her son’s immediate return to the US. The mother said she wanted the father in her son’s life but would have preferred for a gradual reunification, proposing visits initially by the father and later by the boy to the US so that they can form a bond.

Last month, a Paphos family court ruled that the woman ought to immediately return her underage son to his father in the US. The father, a US national, had reported the woman for abducting the child from New York where they lived when he was 12 months old and bringing him to Cyprus in 2017.

The woman, who, said she was forced to flee, citing psychological and physical violence by her partner, had also called for help so that she could travel with her son to the US.