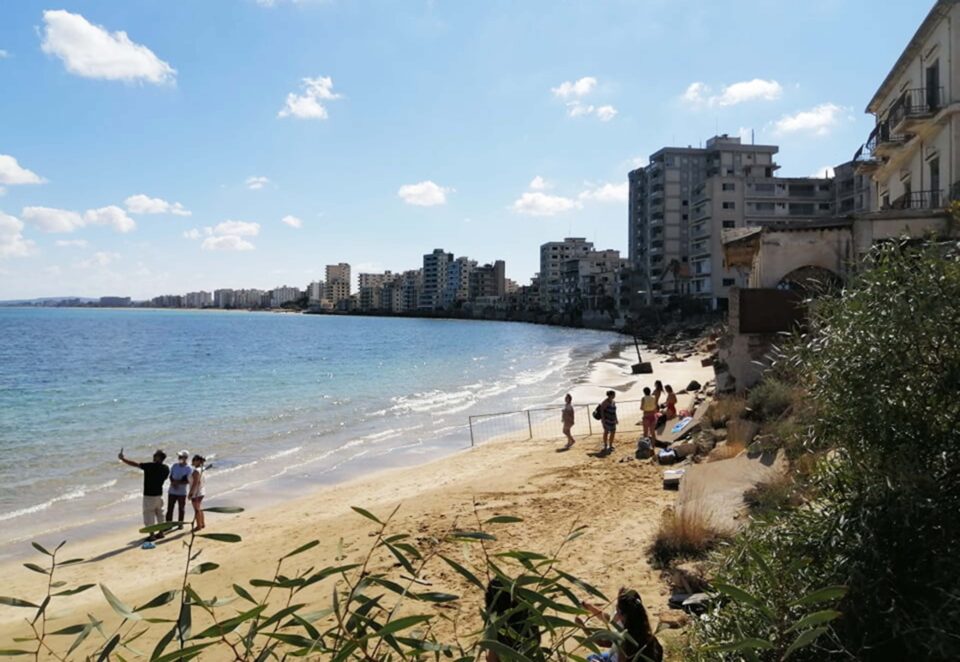 Richard Pine knowledgeably writes Greece Letter for the Irish Times. Earlier this year, examining their long years of war and discord, he wrote ‘History is an echo chamber, locking Athens and Ankara in an impasse’. Pine recognises that Turkey’s strategic geopolitical position guarantees its virtual immunity from reprisals, and the EU’s lack of sanctions on Turkey over Cyprus, has exacerbated Greece’s sense of injustice.

We know the obvious: the US is anxious to keep Turkey’s vast armed bulk in the West, and even if President Biden is prepared to go mano-a-mano with Erdogan, he doesn’t govern alone. The EU has lucrative economic trade with Turkey, and there’s the refugee/asylum seekers containment threat. Even knowing Turkey’s arrogant attitude towards the norms of international law, those on the extended side-lines of the Greece/Cyprus/Turkey disquiet, keep hedging their bets; the status quo has been quaky but not totally eruptive – thus far.

The talks went failed-souffle flat yet again even though all concerned know the possibility exists that Turkey and Tatar will use every time lapse to full advantage while we brood. Should the UN have been tougher, more insistent? The last thing Cyprus needs is another several month’s hiatus, which is in fact, a stay of execution before yet more talks that will likely collapse again.

Considering the barn dance the Cyprus Problem has become, if everyone concerned, near and far, were involved in a business venture with such impotent results, the firm would have gone bankrupt from inefficiency, and the Republic has to shoulder its share of the blame given its unsuccessful methodology. Unless, that is, the UN has eventually conceded, along with some of our own, that we are stuck in our present groove with unlimited time frames cementing its eternal presence here.

Those paying lip service to our plight understand very well that Turkey knows exactly how much it can get away with without fear of any serious reprisals. One huge difference is evident between Cyprus and Turkey: Turkey deals with the realism of its own abilities on the international stage, Cyprus deals with its own perception of support we can expect from others. We are alone. As we were in 1974, no one will come to our aid.

The north has changed irrevocably; the south holds itself in a time warp that sees that shift, yet some will not accept there is no going back to what used to be or what this side alone wishes it to be. Turkish Cypriots are being outnumbered by settlers whose allegiance, like Tatar’s it appears, is to Turkey and who would have no problem with being annexed by ‘the motherland’. Who will risk taking a hard stand on Turkey’s international transgressions as long as its poker hand holds so many important political cards?

On Saturday June 17, 1999, a Cyprus Mail headline wrote, ‘Varosha – hands off!’ It referred to the possibility of Rauf Denktash considering bringing Turks expelled from Bulgaria to settle in Famagusta. It caused uproar, and the Refugee Movement said the opening of Famagusta for this purpose would not only lead to the end of the intercommunal talks but would also cause a wider conflagration in Cyprus.

In the time of Covid, the world has undergone a hiatus, a gap in our usual movements and practices, a break in continuity; a time for pause, to examine our lives, a pause to play suppose: suppose after Turkey has annexed the north, as is now happening by stealth, and got away with it – the UN pulls out? ‘We gave you decades, you wasted the chances.’ Suppose the EU, seeing how everybody else who matters has just taken it on board as inevitable, decides it’s a fait accompli and shrugs it off with more platitudes? We know the legalities as do those who walk us through dangerous times, but legality apparently isn’t enough.

The threat of a two-state island is looming with every lost moment, and everyone concerned knows it then only needs a small incident for Turkey to take the whole island and the seabed reserves it covets as they say…’You didn’t act, why expect us to?’. Greek Cyprus has sinned against Turkish Cyprus and vice versa. Yet sensible, ordinary people on both sides simply want normalcy. It can’t be what it was pre 74, there has to be honestly measured give and take. Real time has to puncture the dream of those who believe the legal rights of this small land can be balanced against what others gain from Turkey’s size and usefulness.

In 1980, Johnny Logan, a young Irishman, won the Eurovision Song Contest with ‘What’s another year?’ Perhaps we should adopt it as our talks anthem. We are not making use of time, and the failures of the inactive, drawn-out present will retain those echoes of yesteryear for future generations, perhaps under a Turkish flag.

Lunchtime Symposia Series: Covid-19 and the Cypriot Diaspora in the UK