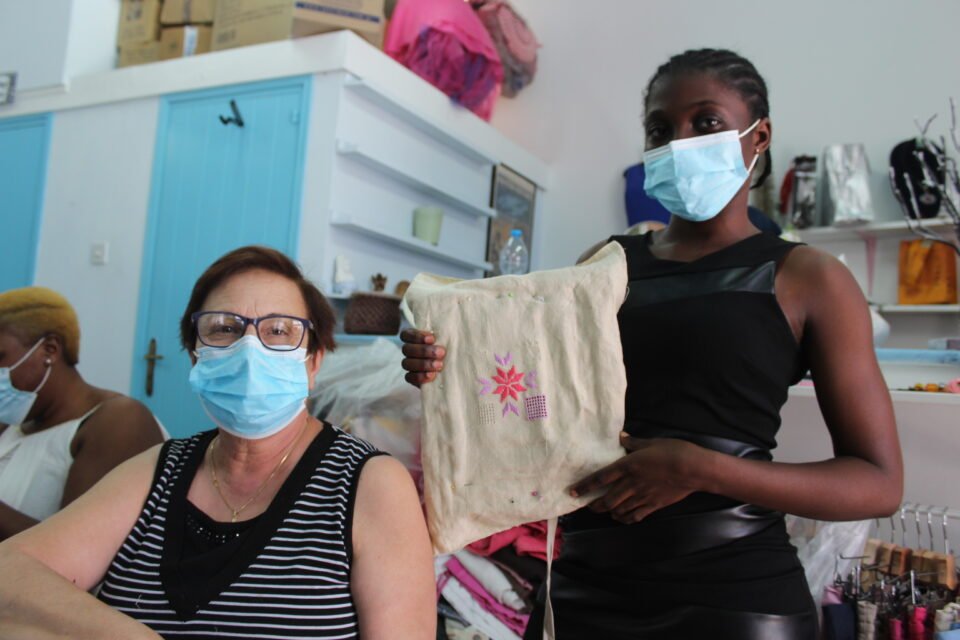 Lefkara lacemaker Panayiota Demetriou (left) with an asylum seeker for Cameroon with a her sample of lace. 'These ladies could make 'lefkaritika' for sale - they are very good! says Demetriou

I have been leading EU projects concerning sustainability for 33 years. The first period, seven years, was for the UK’s National School of Forestry and the last 26 years mainly for UK-based Grampus Heritage & Training.

In all that time, I witnessed a steady erosion of Vocational Education & Training (VET) and an explosion of (sometimes meaningless) academia. Now, after nearly two years of Covid 19, I am witness to a world where some young people are hardly equipped to cope with pandemic disaster, not knowing how to make things, grow things, cook food, even navigate a town without desperately clutching a digitised map. What has been lost are key and common skills, as well as all those things that grandparents were very familiar with, whether it’s growing tomatoes, knitting socks, sewing a button on a blouse or sawing through wood in a straight line. I might also say that some communication skills are being lost, such as the ‘art of conversation’.

Intergenerational learning has never been missed so badly. Looking back, I realise that my parents and grandparents taught me such a lot. Generally speaking, this is not happening now. Wisdom (from older people) is not the same as (often watered down) university education.

Before you start thinking I’m a ‘Luddite’, or just a moaning older person; I really do believe in the digital shift and the IT-based skill sets that younger people attain, but I think we need to retain a greater connection with the past and traditional, vocational and life skills. What is the future for such skills? Has the work of our ancestors all been for nothing? All that accumulated knowledge; does it not have a future? Is there no future for the past, except in a museum?

So, what has this to do with the environment and sustainability? Well, in my opinion, the globalised and digitised modern lifestyle is not truly sustainable. Most people in the west have shifted to being consumers and not producers and like a wave traveling west to east, those who were formerly big producers, like Hungary, Romania, Turkey, now shift into consumerism. India and China, once the perfect example of production economies, now massively increase consumption and it is still, despite strides forward in sustainable energy, fossil fuels that drive that consumption. This, of course is bad for the environment, even in the short term.

My point is that, here in Europe, we have lost so many basic skills that we’re no longer able to manage the landscape, do the farming, grow the food, even clean the streets. The Cypriot farm economy would be hard-pressed to manage without Asian shepherds and field workers. To be sustainable, Cyprus needs its migrant workers, whether they are from the former Eastern Bloc or India, Sri Lanka, Nepal or Vietnam. Cyprus (and every European state) needs labour from outside Europe to be anything like sustainable and unsustainable lifestyles have a negative impact on the natural environment.

Global unrest, war and strife, has led to another ‘problem’, more and more economic migrants, refugees and asylum seekers. Most Cypriots would say there are too many coming to Cyprus and ultimately its bad for the environment and sustainability. I don’t agree with this level of generalisation. Many of these incoming persons have more skills linked to the land, growing things, making things and generally coping with change, and have a lower environmental impact, as measured through personal ‘carbon footprints’.

In Cyprus and in Europe, we talk about a ‘Refugee Crisis’ but when I look at eroded cultural landscapes, bland and homogenous food, people whose only retreat is into a computer game, I think we should be thinking ‘Refugee Opportunity”. Those young people from Asia and Africa whom I now work with, have startled me out of my reverie. In the past weeks, with eight learners, including five West African asylum seekers, we ran a 32-day course that we designed and created called “Sustainable Rural Development – Focus on Culture and Nature”.

It is part of the European Union’s ‘Green Village’ initiative (created through the “Leonardo da Vinci” programme – 2009-2013), with Kato Drys Community Council as the Cypriot partner, working with eight other EU states who were concerned by losses of traditional skills and disappearing ability to make things by hand.

The group learned mosaic, ‘Lefkaritika’ (Lefkara embroidery lace), weaving, crochet, felt-making, cordage/rope making (for chair restoring), making paints from natural plant and mineral pigments, sun-dried brick making and fine line painting in the Greek style. Their aptitude and willingness to learn was a revelation. They were just so good at making as well as being IT savvy and their (often horrific) recent life stories have instilled in them a gritty determination to succeed.

Cyprus needs this new blood and needs to put refugees to work, for the benefit of keeping traditional skills alive, farms, villages, culture and nature. Refugees want jobs and there is a massive amount of work to be done to ensure a future for the past work of our ancestors. That future of course includes internet selling, on-line catalogues of handmade, unique and sustainable products and massively widening the market.

In a way I’m suggesting a bit of a brake on globalisation and a revisiting of localness. For a country like Cyprus, with its wonderful villages and fascinating culture, this just has to be a winner!

It’s a European directive that refugees and asylum seekers have a basic human right to be helped to find work and should be offered training. Here in the mountainous area of Larnaca District, we’ve taken this step forward. To my way of thinking, these enthusiastic and hard-working people are part of the future for lost skills in crafts and looking after the land.

In short, they are a bright spot on the horizon for the future of the past. Why not help them into work, help them rebuild their lives and reap the benefits of their hard, honest and very skilled work?