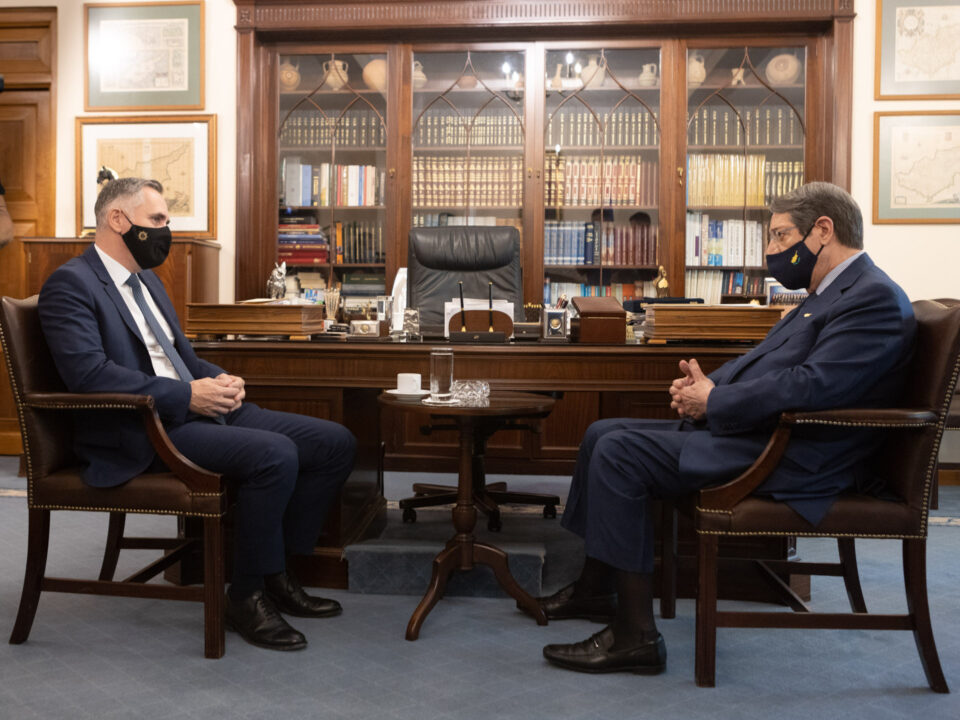 Following Monday’s refusal by opposition parties Akel, Edek and Elam, on Tuesday, Diko, Dipa and the Greens declined to participate in the government, scuppering President Nicos Anastasiades’ bid to form a government of wider acceptance.

But the president put on a brave face, describing the process as fruitful and saying he had seen a strong desire for the consensus needed to tackle the national targets to the benefit of society and citizens.

Anastasiades had kicked off the second day of separate meetings with the leaders of the seven parties elected to parliament on May 30 with talks with Diko’s president Nicolas Papadopoulos who told reporters that the party cannot participate in a government with which it has serious political differences, particularly as regards combatting corruption.

But this does not mean that the party cannot contribute constructively to promote significant reforms in the House, he said, adding that he expected the government to show the same constructive spirit.

The second rejection on Tuesday came from Dipa president Marios Garoyian who said that the party would continue to work for national and social consensus without participating in the government.

Akel, Edek and Elam, whose leaders met the president on Monday, all declined his invitation.

In a written statement, President Anastasiades thanked all the political leaders for the honest and creative discussions of the past two days. “It is was not a formality. It was an initiative, by me, substantive, necessary and judging by the result, particularly fruitful,” he said.

He voiced satisfaction that despite the differences, he had seen a strong desire to find common ground and the necessary consensus required to achieve national targets. The programme Cyprus -Tomorrow does not concern the government or a single administration’s term but is a long-term plan of concern to all requiring national, political and social consultations, he said.

“I am not asking to co-govern. It is not my objective to share the responsibilities of governing. I am asking to build bridges of responsibility so that we can all meet the new, big challenges together,” he said adding that he had told political leaders he was ready for a continuous and creative discussion with all to achieve consensus for the reforms needed to make the state modern, effective and friendlier to citizens.

“The positions of the political leaders was in the same spirit, and I thank them again,” he concluded.

Speaking to the media after meeting the president on Tuesday, Papadopoulos said that he listened carefully to the president and will be conveying his exchange to the party.

“What we made clear today as Diko is that we cannot participate in a government with which we have significant political differences, particularly as regards combatting corruption,” he said.

“This does not mean that we cannot contribute constructively to promote significant reforms in the House. Diko has proved that even though it is in the opposition it can support legislative initiatives, political proposals to bills that benefit our country and people,” he added.

Asked about the memo he was holding leaving the presidential palace, he said that it was the list of reforms the government wants adopted in the immediate future. These will be discussed by the party in the next few days, he added.

A little later, Dipa president Garoyian said his party would not be joining the government but would be working for consensus.

Asked about the party’s proposal for the two main parties to rotate as presidents of the House which never progressed, he regretted a “lost unique opportunity” to create conditions of wider unity.

Of the president’s proposal for a government of wider acceptance, he said that he had listed with care, adding that the party has been speaking about the need for consensus since its establishment and would continue to work to this end without necessarily participating in the government.
Asked about the possibility party member Angelos Votsis, who did not secure re-election to parliament, may be appointed minister he said, “no way”.

But he said that the party was ready to contribute and cooperate for the right policies to protect the environment and create jobs.

He also referred to the reforms that need to be approved by the House so that Cyprus can secure EU approval of its recovery and resilience fund, saying that the Greens were ready to help promote the right policies that will create jobs and protect the environment, society and the economy.

Some €400m in the recovery fund refer to Green Growth which can lead to the creation of a large number of jobs in all the sectors.
On Monday, Akel’s general secretary Andros Kyprianou had told reporters that there was no political basis for his party to take part in the government, but appeared ready to support any reforms that would benefit the people.

Earth through the lens of a geoscientist